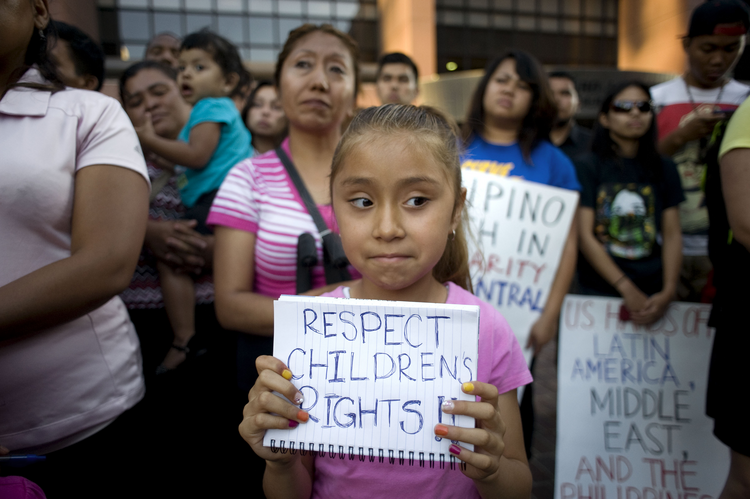 A girl holds a sign during a 2014 vigil and rally in support of the flood of undocumented Central American minors. (CNS photo/David Maung, EPA)
The quiet radicalism of accompanying undocumented immigrants
00:00
Subscribe
Download

On this week’s podcast Kerry Weber and Matt Malone, S.J., take on the continued challenge of integrating faith and action. Eric Sundrup, S.J., joins the conversation.

Sister Laetitia Bordes of the Society of Helpers, who was featured in Kaya Oakes’ recent article on the Jesuit parish of St. Agnes in San Francisco, Calif., spoke to America about how she lives out her faith through advocacy for refugees and undocumented immigrants. Sister Bordes mentioned that hearing the stories of undocumented people face to face was central to the parish’s decision to create sanctuaries for these individuals.

How St. Agnes church became the first Jesuit parish in America to declare itself a sanctuary
Kaya Oakes

“In hearing those stories the hearts of people were really changed,” said Sister Bordes. “Of course [storytelling] was used as an organizing tool...people were invited to commit themselves in some way [after listening to these stories].... They could visit their representatives, they could write letters or...open their homes to refugees who were seeking asylum. There were just many different ways in which they could become organized. And from that some communities decide to become sanctuary parishes, sanctuary communities.”

There are many ways to accompany—it’s not only opening your homes to someone who really needs a place to stay.

Sister Bordes also described how important accompaniment is to the sanctuary movement. “You can sign up to say, ‘Yes, I would be willing to take this undocumented immigrant to the clinic because she’s afraid to go'...she’s afraid to meet her children after school—afraid that I.C.E. is hanging around the schools. There are many ways to accompany—it’s not only opening your homes to someone who really needs a place to stay.”