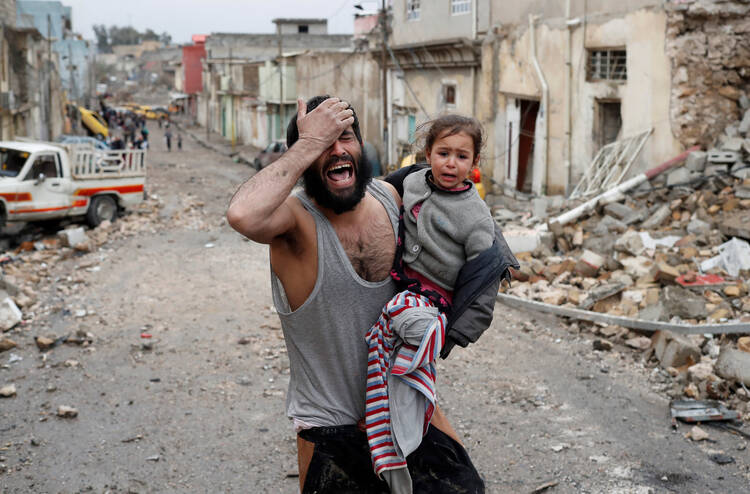 A man weeps as he carries his daughter away from an Islamic State-controlled part of Mosul toward Iraqi special forces soldiers during a battle on March 4 (CNS photo/Goran Tomasevic, Reuters).

Following a recent spike in civilian casualties in Iraq, Pope Francis has demanded urgent action to protect civilians. Speaking at the end of his general audience on March 28, he said forces involved in the battle for Mosul have an obligation to protect noncombatants caught in the crossfire.

"In expressing profound sadness for the victims of the bloody conflict, I renew my appeal that everyone commit themselves to using all efforts to protect civilians, an imperative and urgent obligation," he said.

The United Nations reports that more than 279,000 Iraqis have been driven from their homes in Mosul and surrounding areas since military operations to retake the city began in October. Thousands more remained trapped by the fighting in the city amid reports that ISIS militants have been executing residents caught trying to escape.

A U.S. air attack on March 17 in support of the Iraqi offensive against ISIS led to the deaths of as many as 200 Mosul residents, Pentagon officials acknowledged on March 28. The high death toll led to a decision by Iraqi military to temporarily suspend the U.S.-led air campaign and has contributed to speculation that U.S. military has dangerously relaxed its procedures on strike authorization in the region.

Responding on March 28, the commander of the coalition effort to defeat the Islamic State of Iraq and Syria said that the death of innocent civilians during war is a terrible tragedy that weighs heavily on coalition strategists. Speaking with reporters at the Pentagon from Baghdad via teleconference, Army Lt. Gen. Stephen J. Townsend, commander of Combined Joint Task Force Operation Inherent Resolve, said the coalition takes all casualty reports “very seriously.”

While he acknowledged some adjustments to “decentralize” or “ease the application of our combat power,” Mr. Townsend denied that loosening of U.S. military’s strike authorization procedures had a role to play in the heightened death toll, arguing close combat in populated urban zones made a higher civilian toll “predictable.” Following the reported civilian deaths on March 17, he said, a “credibility assessment” was being conducted that could lead to a formal investigation.

Pope Francis joined a chorus of humanitarian relief and human rights critics who urged the United States to do more to avoid noncombatant deaths and injuries as the offensive against ISIS grinds on.

In his appeal Pope Francis joined a chorus of humanitarian relief and human rights critics who urged the United States to do more to avoid noncombatant deaths and injuries as the offensive against ISIS grinds on. The U.N. human rights office called on the U.S.-led coalition to minimize civilian casualties, reporting at least 300 people have been killed since mid-February.

In New York Human Rights Watch charged on March 28 that “procedural changes for authorizing airstrikes in Iraq raise concerns about the protection of civilians.”

Lama Fakih, deputy Middle East director at Human Rights Watch, said, “The high number of civilian deaths in recent fighting, as well as recent announcements about changed procedures for vetting airstrikes, raise concerns about the way the battle for west Mosul is being fought.”

Amnesty International USA said on March 28 that “the shocking spike” in civilian casualties from both airstrikes and ground fighting between the Iraqi military and ISIS militants “raised serious questions about the lawfulness of these attacks.”

“Evidence gathered on the ground in East Mosul points to an alarming pattern of U.S.-led coalition airstrikes which have destroyed whole houses with entire families inside,” Amnesty charged.

“The fact that Iraqi authorities repeatedly advised civilians to remain at home instead of fleeing the area, indicates that coalition forces should have known that these strikes were likely to result in a significant numbers of civilian casualties,” she said. “Disproportionate attacks and indiscriminate attacks violate international humanitarian law and can constitute war crimes.”

Can Christians return to Mosul? The displaced wait with uncertainty.
Religion News Service

According to the group, fleeing the city ahead of the fighting was extremely difficult for residents of Mosul, “as IS militants routinely punished and at times killed those caught trying to leave.”

Human Rights Watch urged the U.S. led coalition to release in detail the findings of its investigations into the Mosul attack, adding that the coalition “should ensure that serious violations of the laws of war are appropriately referred for criminal prosecution and that civilian victims or their families receive adequate redress.”

Mr. Townsend assured reporters at the Pentagon that the U.S. review of the incident would be thorough and transparent. “Right now there are a lot of conflicting reports [about] what brought down the building or buildings that caused civilian casualties [on March 17],” Mr. Townsend said. “What we know for sure is we did conduct a strike in that area. What we don’t know for certain is if that strike is responsible for the casualties in question.”

The general noted Iraqi military reports that ISIS militants might have trapped civilians in a house and rigged it to blow up and that a secondary vehicle-borne homemade bomb might have destroyed the house.

“It could have been a combination of events that caused this tragedy, and that’s why we’re hesitant to say anything definitive until our proper process is completed,” Townsend said.

“I’ll say this: If we did it—and there’s a fair chance that we did—it was an unintentional accident of war, and we will transparently report it to you when we’re ready.”

The general described the battle in the old city of Mosul as the most significant urban combat to take place since World War II. “It is tough and brutal, [with] house-by-house, block-by-block fighting,” he said.

“Although our partners and the coalition have made mistakes that have harmed civilians, we have never targeted them—not once,” Townsend said. “On the other hand, the savages that are ISIS deliberately target, terrorize and kill innocent civilians every day. The best and fastest way to end this human suffering is to quickly liberate these cities and Iraq and Syria from ISIS.”

In the cases of civilian deaths after coalition strikes Amnesty International has reviewed, surviving residents and neighbors told field investigators that ISIS fighters had been present in or around the targeted houses—usually on the roof or in the garden—as well as in or around other nearby houses which were not targeted. “In all the cases the airstrikes destroyed entire houses, often also destroying or severely damaging nearby houses and properties,” Amnesty reports.

The group charges that “IS shamefully resorts to using civilians as human shields, a serious violation of the laws of war that amounts to a war crime.”

But, Ms. Rovera adds, ISIS’s use of human shields “does not absolve Iraqi and coalition forces from their obligation not to launch disproportionate attacks.”

As the official investigation of the recent civilian deaths proceeds, a pause in the Mosul offensive inspired by the horror of the March 17 strike was lifted on March 26. According to a U.S. joint task force statement issued after reports of civilian deaths first began circulating a week after the Mosul strike: “Our goal has always been for zero civilian casualties, but the Coalition will not abandon our commitment to our Iraqi partners because of ISIS’s inhuman tactics terrorizing civilians, using human shields, and fighting from protected sites such as schools, hospitals, religious sites and civilian neighborhoods.”

That mission determination may mean that for Mosul’s residents, the collateral suffering engendered by the effort to drive ISIS out of Iraq is likely to continue.

Mohammed, a resident of East Mosul who lost several relatives in a coalition air strike, told Amnesty International: “The Dawa’ish [ISIS militants] were everywhere and there was absolutely nothing we could do about it. If you challenged them they would kill you.

“They ran this city for two and a half years and they were rarely targeted during all that time... Why now [is the coalition] destroying our homes with our families inside, just to eliminate two or three Dawa’ish on the roof?”

I am most disappointed by Pope Francis' admonition that "... everyone commit themselves to using all efforts to protect civilians, an imperative and urgent obligation." The assumption in these words is that U.S. attacks in Iraq are justified which, by just war standards, has only been established in the media and by circumstantial evidence.

More importantly, the emergence and presence of ISIS is the result of the U.S. criminal attack of Iraq in 2003 which was preceded by 13 years of U.S./U.N. sanctions. These sanctions took the lives of millions of Iraqis, the preponderance of whom were children. I personally witnessed the death and suffering of many of these children by these same sanctions.

Please, Pope Francis, do not justify the ongoing slaughter perpetuated by the U.S. by assuming, even by inference, that these civilian deaths in Iraq are an aberration. In fact, the entire U.S. years-long war of aggression against Iraq, according to the Nuremberg tribunal, "is not only an international crime; it is the supreme international crime differing only from other war crimes in that it contains within itself the accumulated evil of the whole."

We, as a church, can do better than this. To prevent such horror as the death of these civilians, we must be willing to identify and stop the real perpetrators. As Pope Paul VI has said, "If you want peace, work for justice."