Skip to main content
Signs Of the Times
October 3, 2016 issue

Fall of Mosul May Prove Greatest Humanitarian Crisis of 2016

Fall of Mosul May Prove Greatest Humanitarian Crisis of 2016 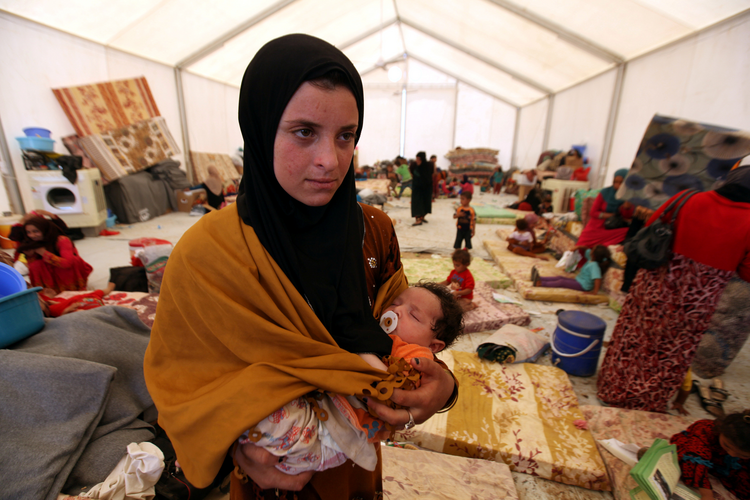 .S. and Iraqi military strategists are preparing for a final drive on Mosul, hoping to dislodge Islamic State militants from their last stronghold in Iraq. But how well are they planning for the inevitable impact of that offensive on the city’s residents?

Hani El-Mahdi is the Iraq country representative for Catholic Relief Services. He told America during a text interview by Skype this week that he expects that the fall of Mosul, Iraq’s second largest city, will represent the worst humanitarian crisis of 2016. That is saying a lot during a year and in a region that has already produced millions of people displaced by civil war and ISIS terror.

Anticipating the offensive, C.R.S. and other aid groups are preparing as best as they can, El-Mahdi says. He worries that the fall of Mosul could mean anywhere between 1 to 1.5 million more displaced people, a figure he bluntly calls “overwhelming.”

C.R.S. has already been training new staff and volunteers to assist, setting aside materials to meet the crisis whenever it occurs and “building more relations with local communities to guarantee safe access” to desert shelters.

The U.S. State Department announced on Sept. 14 more than $181 million in additional assistance. El-Mahdi has already seen evidence of significant new U.S. humanitarian resources flowing into the region, funding much of the prepositioning of emergency resources. All the same, he expects a large-scale crisis as thousands of people may be on the move to get away from ISIS or to escape the fighting.

With almost 3.4 million people driven from their homes, Iraq already represents one of the world’s biggest internal displacement crises. There is little reason to expect that refugees from the siege of Mosul will experience anything different than those who recently fled during the fight for Fallujah. El-Mahdi explains that most of them escaped the fighting into the harsh desert “with no preparation” and nothing more than the clothes on their backs.

Most of the internally displaced people C.R.S. works with are living in temporary quarters throughout the city of Erbil in the northern Iraqi region currently under the authority of the Kurdistan Regional Government. These internally displaced people represent older waves of dislocated communities, including Yazidi and Christians who fled in 2014 and who “were allowed to get into cities like Erbil and Duhok.”

These persecuted groups have been accepted in the Kurdistan region of northern Iraq, according to El-Mahdi. But the 2016 arrivals to the north from Fallujah—and most of those likely to flee north from Mosul—are Sunni Arabs.

El-Mahdi is uncertain how the K.R.G. will respond to a large movement of Sunni Arabs into areas under its control. The Sunni Arabs are suspect to many Kurds because of their real or perceived support for ISIS. A large influx of Sunni Arabs north might provoke some effort at containment from the K.R.G., El-Mahdi fears.

Most of the people dislocated from Fallujah, he says, have already been prevented from entering Erbil and are living in precarious to life-threatening conditions on the open desert. “Imagine fleeing [your] town and villages, then staying in the open in temperatures that exceed 115 to 120 degrees all the time,” he says.

The end of the ISIS reign of terror would surely be welcome in the region, El-Mahdi says, but it will not mean the end of ISIS—an ideology he fears will persist whatever the outcome in Mosul—nor the end of crisis in Iraq. Though CRS intends to stand by to help, he says it could be years before anyone will be able to return to homes in communities that have been torn apart by combat, booby traps and sectarian divisions.

This article also appeared in print, under the headline “Fall of Mosul May Prove Greatest Humanitarian Crisis of 2016,” in the October 3, 2016, issue.