Can Christians return to Mosul? The displaced wait with uncertainty.

Can Christians return to Mosul? The displaced wait with uncertainty. 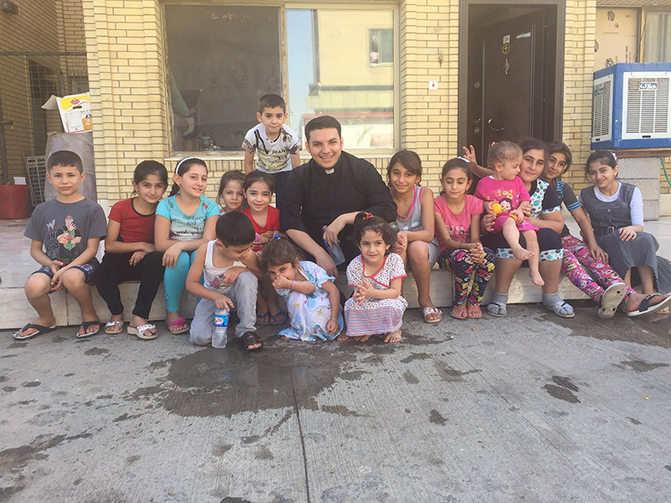 The Rev. Martin Banni with a group of displaced children from the Christian towns in Nineveh in Irbil. (Photo courtesy of Martin Banni)

The Rev. Martin Banni, a Chaldean Catholic priest, grabbed the Eucharist, the church’s official documents and a few personal items ahead of the Islamic State fighters’ assault on Karemlash, a town 18 miles southeast of Mosul, two years ago.

More than 100,000 Christians from the area had already left. The archbishop of Mosul begged them to flee, too.

“They (Kurdish fighters) left us alone, and we were few in number with no weapons, and we could do nothing to face the Islamic State,” said Banni. “We ran.”

As Iraqi forces begin the long-awaited offensive to retake Mosul and neighboring towns from the Islamic State group this week, Iraqi Christians on the Nineveh plain hope their time in exile is soon coming to an end.

“I have not slept–I stay awake all night following the news,” said Abu Adrian, a teacher in Alqosh, a mountainous Catholic holdout 31 miles north of Mosul. “We hope to see our towns liberated as soon as possible to enable our people to return to their hometowns and homes after this long struggle.”

Alqosh escaped Islamic State control. And since 2014, the town has played host to around 600 Christian families on the run from persecution farther south.

There and elsewhere in northern Iraq, the situation for the Christians has become dire, even unbearable. They lack jobs and money, with entire families of up to 10 sharing a tent or a single room. Most fled with only identity papers and the clothes on their back.

“I managed to take my ID, my passport, mobile, and laptop,” said Banni, who has been a refugee in Irbil in Iraqi Kurdistan since 2014. “We did not think it would be a no-return departure. We thought it will take a day or two.”

Some of these Christians say they had all but given up hope of ever being able to return.

“There was a sense of frustration among people who wondered about the feasibility of staying like this for two years or more,” added Banni. “Besides, they wondered about the time it would take to reconstruct their cities after liberation, if all this time has passed and they still had not been liberated.”

That frustration grew as Iraqi government forces liberated Fallujah or Ramadi over the past 18 months but Mosul and its surrounding towns remained under Islamic State control.

As a result, in August, Banni and others felt compelled to start a “Liberate Mosul” campaign in Irbil to keep up the community’s flagging hopes. The campaign went viral worldwide on social media but didn’t dispel the sense of pessimism among Christians about ever being able to go home.

And now, the Islamic State’s fierce resistance to Iraqi forces suggests Mosul exiles could wait for months before they can move back.

“I have no plans,” said Samer Elias, a 42-year-old Christian Iraqi writer from Mosul who has been living in the Kurdish city of Dohuk. “The future for us Christians seems quite gloomy and obscure.”

It remains uncertain what returning Christians will find. Many, like Elias, don’t know whether their homes even exist anymore.

Banni acknowledged that some of his flock are too worn down from the past two years and pessimistic about the future. Some have been considering going to Europe or elsewhere rather than returning home.

But the 25-year old priest, who was ordained in Irbil in September instead of in his beloved Mosul, already has a list of priorities for rebuilding hospitals and schools.

“This is most important because it ensures our people can come back to their homeland and live in peace there once again,” he said. “The liberation of the region is finally happening and the prospect of going home feels closer now than ever before.”

In spite of all that has happened, and how his community has been treated, he hopes things will be different in the future.

“We want to face our problems and solve them, not to escape from them,” he said. “A people who have borne all these difficulties can never be broken.”

Emad Sabeeh Georges, 36, a sales manager now in Irbil, says his motivation to return to his native Qaraqosh goes back to his past and that of his ancestors.

Iraqi forces are fighting for control over the city so his wait might not be too long now.

“This is my homeland, the land of my ancestors,” he said. “We have not conquered or taken it by force – we are Iraq’s real sons and we have learned how to live in peace with others. I insist on going back, to stay, to rebuild and to change the extremist thoughts around us.”