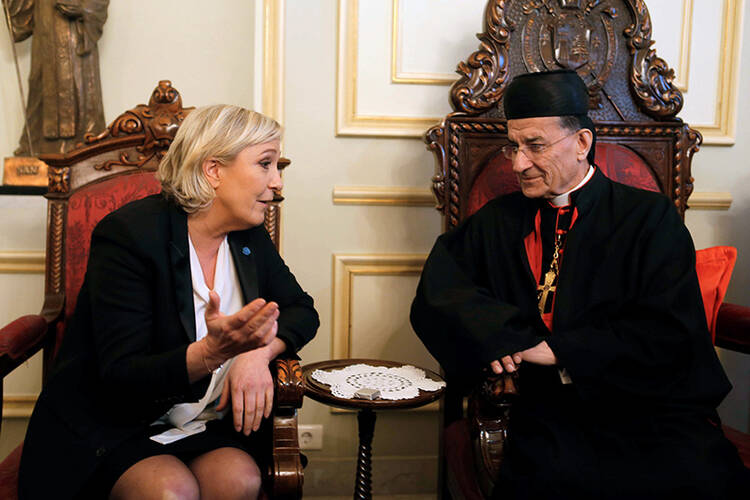 Two of the most interesting photo ops of France’s current presidential election campaign took place last month 2,000 miles away in Lebanon—and they were all about religious optics.

In one, the far-right leader Marine Le Pen called off a scheduled meeting with Grand Mufti Abdellatif Deriane just outside his Beirut office when the Muslim cleric’s staff insisted she don a headscarf before going in for the meeting.

With the video cameras rolling, she emphatically refused.

Later that day, with the same media entourage in tow, she smiled and exchanged pleasantries with Patriarch Bechara Boutros al-Rai, leader of Lebanon’s Maronite Christians and a cardinal of the Roman Catholic Church.

The National Front leader made her first trip abroad as presidential hopeful to burnish her weak foreign policy credentials, but the images flashed back to France sent a strong domestic message.

Her supporters back home immediately got the memo—“no to Muslims, yes to Christians”—and loved it.

Playing the religion card so openly is unusual in France, where the official separation of church and state is normally taken so seriously that politicians rarely if ever mention in public whether they have a faith or not.

But this two-round election, on April 23 and May 7, is not taking place in normal times.

Playing the religion card so openly is unusual in France.

After several deadly attacks by militant Islamists in recent years and sliding support for the main parties, politicians—especially from the right and far-right—are harking back to a secularized version of France’s traditional Catholic identity as one of several ways to mobilize voters.

Their occasional religious references, which are mostly aimed at reassuring worried swing voters who could provide a crucial margin of victory, stand out in a country where many—notably on the left—denounce any suggestion of religion in politics as unacceptable populist manipulation.

“Candidates know that religion as a shared culture speaks to many people in a world that no longer offers them a shining future,” Philippe Portier, sociologist of religion, told the newspaper 20 Minutes. “This talk can quickly resonate with a population that feels more and more culturally Christian, even while it doesn’t always follow the rules.”

Eleven candidates are competing in the election, and the top two from the first round will meet in the runoff two weeks later.

Opinion polls have long put Le Pen out front in the first round with about 25 percent of the vote, but losing the runoff to whichever mainstream rival she faces. Centrist Emmanuel Macron, now polling about evenly with her, looks likely to be her opponent.

When Le Pen took over the National Front from her father, Jean-Marie, in 2011, she set out to soften its reactionary image and woo mainstream voters by dropping its traditional anti-Semitism and stressing economic and social issues.

A twice-divorced lawyer with three children and a sharp debater, she projected the image of a modern woman not afraid to take a stand.

But Francois Fillon showed in November that there were still lots of votes to win on the right when he swept the primary of the Republicans—the main conservative party—by openly appealing to traditional Catholics angered by the Socialist government’s legalization of same-sex marriage in 2013.

His unexpected primary victory made him look like the probable next president. But his campaign soon became mired in a series of financial scandals that unsettled Catholics originally attracted by his Mr. Clean image.

Le Pen’s campaign shifted focus to go after those voters. In late February, she appeared at Mont Saint Michel, the famous medieval monastery off the Normandy coast, to deliver a stirring appeal to patriotic French voters to rally around her.

“Mont Saint Michel, the eternal symbol of a France that draws strength and grandeur from its Christian roots,” the National Front’s secretary-general tweeted from her rally.

In interviews with Catholic publications, Le Pen explained she was Catholic but not practicing, like most French. “I am a believer,” she told the Christian news magazine La Vie. “But I only go to church for weddings, funerals and baptisms.”

When asked how to square her opposition to immigration with the biblical teaching to welcome strangers, she insisted that those words pertained only to individual behavior and not political policies.

Religion also figures in Le Pen’s campaign in a negative way through her insistence on a vigorous application of “laïcité,” the official church-state separation that enjoys wide support in majority public opinion, especially on the left wing.

On closer inspection, her version of “laïcité” turns out to be aimed against Muslims because it would rule out headscarves, halal meat, Islamic holidays and any other religious-based demand the minority might make.

Fillon, the candidate who brought religion into the campaign last autumn, engineered his surprising primary win by wooing traditional Catholics who took to the streets in 2012-2013—many for the first time—to demonstrate against same-sex marriage.

Fillon, the candidate who brought religion into the campaign last autumn, engineered his surprising primary win by wooing traditional Catholics

After gay marriage was legalized, many of them formed a network to keep their movement going.

Fillon tapped it for his campaign by openly calling himself Christian and expressing a personal opposition to abortion, even though he did nothing to limit it when he was prime minister from 2007 to 2012.

Because of his financial scandals, Fillon has since slipped to third place behind Le Pen and Macron with 18 percent in the opinion polls.

But he commands continued loyalty from a hard core of supporters, including campaign organization help from his traditional Catholic network, and still hopes to overtake Macron to run against Le Pen in the second round.

Perhaps fitting for a centrist, Macron performs a balancing act on religion, upholding France’s policy of “laïcité” but stressing it should not be pushed too far.

During last summer’s debate about the “burkini,” the full-body swimsuit for Muslim women, he defended both some mayors at Mediterranean resorts who banned it and a woman’s freedom to decide what to wear.

A child of an agnostic family, he revealed in December that he decided to be baptized a Catholic at 12 when he entered a Jesuit high school.

Derided by his critics as “a new messiah” for the enthusiasm he generates among supporters, Macron doesn’t talk much about faith publicly. But he likes to say that “politics is mystical” and he finds “a transcendence in political activity.”

“I think about the nature of my faith all the time, but I have enough humility that I don’t pretend to speak with God,” he told La Vie.

Playing the "pro-life" card in our election got us the worst, most corrupt president in the history of the nation. The French should take a cue from that.