Why journalists need to resist the label of ‘the opposition’ 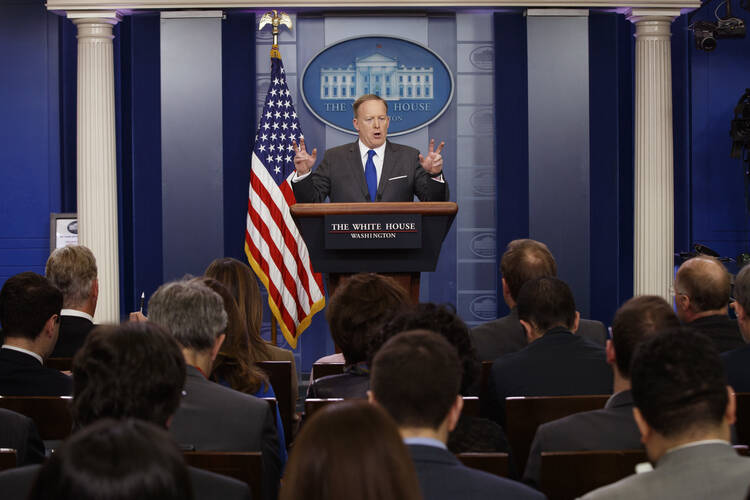 President Donald J. Trump has repeatedly denounced stories critical of his administration or its policies as “fake news.” His press secretary, Sean Spicer, barred some reporters considered unfriendly from a White House briefing on Feb. 24, and senior advisor Stephen Bannon labels the press “the opposition.” On March 2, the American Civil Liberties Union, the American Society of News Editors, the PEN America Foundation and 78 other groups concerned with press freedom warned that the new president’s attacks on the press were an attack on democratic norms.

“The effort to delegitimize the press undermines democracy, and officials who challenge the value of an independent press or question its legitimacy betray the country’s most cherished values and undercut one of its most significant strengths,” the groups said in a joint statement.

The characterization of the press as “the opposition” is especially dangerous. It is an attempt to delegitimize facts, to denigrate reporting gathered through objective methods as nothing more than ideological agitation. To call journalists the opposition demotes them from truth-seekers to partisans. Mr. Bannon’s characterization is likely to stick because it fits neatly into the current habits of ideologically cosseted news consumption, in which citizens tune into Fox or MSNBC, right-wing or left-wing radio, to hear their own ideas parroted back at them, with details that complicate the story edited out. More insidious is the delivery of news via Facebook or through “selected just for you” algorithms that spoon-feed articles to readers based on their previously surveilled interests and reactions.

This is the opposite of being informed, even if the source articles are written by legitimate news organizations—and so much on Facebook is worse, just compilations of outrage and misleading headlines meant to gin up ad revenue. In this format, news that reinforces your beliefs becomes a cudgel, ammunition for your side, while news that makes you uncomfortable can be dismissed as propaganda, partisan manipulation for the other side.

Acknowledging our failings should not be an excuse for dismissing the importance of journalism to the functioning of a democracy.

Journalists are far from perfect. We make mistakes and get facts wrong. We suffer frequently from group-think, and our attempts to deliver the news to readers are hemmed in by an establishment consensus on acceptable ideas. This has led to real problems in even the most respected news organizations, from uncritical reporting in the run-up to the Iraq war in 2003 to a blindness to growing economic stratification that was not corrected until after the Occupy Wall Street movement. But acknowledging our failings should not be an excuse for dismissing the importance of journalism to the functioning of a democracy.

These attacks by the Trump administration come as the press is severely weakened by decades of newspaper and magazine closings, a desperate drive to flatter and entertain fickle internet-addled readers, and a dive into punditry, which is cheap to produce but useless for the acquisition of knowledge. Each of these developments has been bad for democracy and has eroded the nation’s ability to engage in critical discourse about public life.

Journalists need to resist the label of opposition.

Journalists need to resist the label of opposition. What we need to do is report. We need to accumulate facts in a sea of supposition. Actual, old-fashioned reporting, which involves calling strangers, leaving the office and refusing to carry water for anyone is the solution to these threats and our diminution as an industry.

“The enemy of the people” line had me thinking about a different characterization of the press—one favored by the investigative journalist and Trump biographer Wayne Barrett. He trained scores of journalists during his long career, instilling in us a zeal for precision, fealty to detail and appetite for tireless digging. (He died on the eve of the Trump inauguration from a rare lung disease.) While he was a thorn in the side of many politicians, he did not consider himself against anyone. He was for honesty. Mr. Barrett referred to journalists as “detectives for the people.” When we are doing our job correctly we are not the enemies of the people or cheerleaders for politicians. We are detectives.

Eileen Markey is the author of A Radical Faith: The Assassination of Sr. Maura (Nation Books, 2016), a biography of one of the churchwomen killed in El Salvador. She has been a reporter covering urban policy and poverty for two decades.

Trump is right that what poses as the press is really an arm of the opposition to his government.

Journalism no longer exists in the United States. Essentially the media is an arm of the Democratic Party as is America, the magazine. No fair and balanced on this site nor in any of the media outlets. This article is just one of a long list of examples of ways to make Trump look bad.

A couple excerpts from a recent article http://washex.am/2nbnAec which details the bias of media outlets.

The media and Democrats are so close in association and so close in their philosophical views that we might as well use one word to describe both, and that's 'Mediacrats,

Mike Huckabee says you can tell if a press report is unbiased if after reading the report one does not know if the reporter is for or against the person they are reporting on. Does anyone here think that the articles on America including this one are such that you cannot know who the author favors.

I would suggest that a good reporter or detective would start by investigating the news reports themselves to see what is behind them. A good place to start is all the stories about collusion of Trump with the Russians. So all honest reporters have at it.

The main stream media is corporate, not liberal. Trump coverage attracted lots of eyeballs and advertisement sales. How much time was spent elaborating policy differences between Clinton and Trump? BORING! If main stream media disliked Trump, it's not because of any progressive pretentions but because he exposes the true swine heart of the corporate and billionaire establishment. But as for negative coverage of Trump, the man is one big negative. It's like saying that all the news coverage of Ted Bundy was negative because he was a young republican. No, it was because he was a serial killer.

As we all know, you can lie in a lot of ways. Directly in the written or spoken word or by action declaring that what is false is true or that what is true is false; indirectly by failing to correct a falsehood of another when you know the truth; and in the case of the MSM, reporting and/or commenting on manipulated versions of actual events, whether they be altered directly, intentionally misstated, and/or committing other actions that would slant the reporting in a different way that would result in conclusions desired by the journalist. I can allow for human error, but I will not condone continued incompetence, negligence, and purposeful misstatement of the truth by the MSM in all the aforementioned ways. There is a reason why the MSM is now called the Opposition--it is 100% warranted by the revelations of collusion, corruption, and innumerable situations that have come to light over the past few years, all adding up to a betrayal of the trust placed in them by the American people. If the essayist believes that such things have not happened, then I can only conclude that she is naive, which if you think about it, would not make sense given her book-writing. Her journalistic IQ and ethical disposition should prompt her to seek the truth in reasons why there is opposition to her profession and not pander to her profession's hurt feelings. To put it another way I do not see the likes of Ernie Pyle and Hannah Arendt in modern day journalists. If the profession resists in spite of the truth, they will only hurt themselves further, and the people will seek options.

The writer has good company. A while back, a piece written by a former editorial director of the Harvard Business Review referenced one of the regular writers for "America".

The current mainstream media frankly is an arm of the Democratic party and it's only gotten worse. It has one standard for Democrats (the good guys for them) and another for Republicans (the bad guys for them). As long as that continues they resemble Pravda whose role is to prop up the sanctioned party and Presidents of that party and oppose any pol who opposes the sanctioned party. Fake news like fake poles is generated to advance that agenda.