What Trump's budget could mean for school vouchers 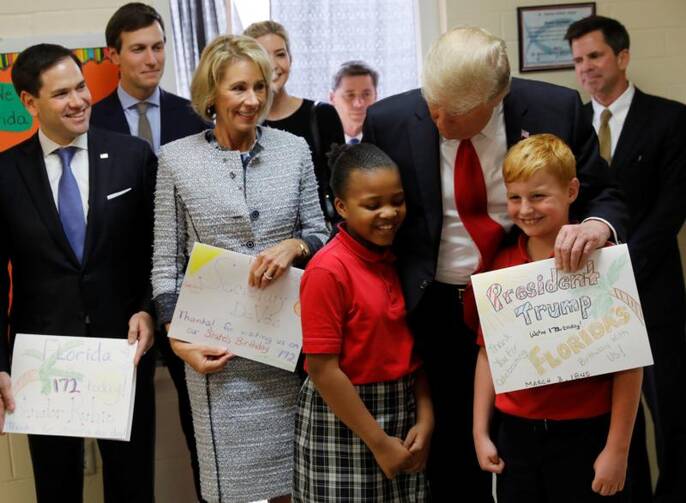 Although there is currently more talk than action on school vouchers—scholarships used for private school tuition—the conversation about them has moved from education circles to the highest levels of government as they are discussed by President Donald Trump, Education Secretary Betsy DeVos and members of Congress.

Catholic leaders are paying close attention to this discussion too, since the U.S. Conference of Catholic Bishops and the National Catholic Educational Association have long been advocates of parental choice in education.

The most recent reference to school vouchers was in Trump's first budget proposal on March 16. It called for a $9 billion cut of the Education Department's overall budget while proposing an increase in school choice funding.

The president's budget proposal, which needs congressional approval, allocates $1.4 billion to expand school vouchers and proposes to eventually provide $20 billion a year, the amount Trump pledged to spend on school choice during his campaign.

"We will give our children the right to attend the school of their choice, one where they will be taught to love our country and its values," Trump said at a March 15 rally in Nashville, Tennessee.

Greg Dolan, associate director for public policy for the USCCB's Secretariat of Catholic Education, said the president's budget proposal did not contain details about how the voucher money would be made available so it's hard to know exactly how this scholarship plan might play out.

But he was happy they were included in the budget proposal as a "marker of what the president is interested in."

Dolan, like other school choice advocates, said that the lack of details didn't dissuade him.

"We're paying attention to this," he told Catholic News Service on March 17.

The education section of the "skinny budget," as it has been described, only devotes two pages to education and doesn't include proposals for tax-credit scholarships, which have been touted as Trump's likely way to expand school choice.

The federal tax credit proposal the Trump administration is considering would allow individuals or corporations to receive full or partial tax credit for donations to nonprofit organizations that provide scholarships to be used for private school tuition. Scholarship tax credits are currently used in 16 states and are primarily for low-income students.

"Federal tax credits are very intriguing and could be a game changer," said Dolan, who added that the key is in the details. If the federal government does not put strings on the funds, Catholic schools, which have more than 40 percent of the seats of private education, would be interested.

"If it's done right, it could bring (school) choice to places where it isn't," he said.

Currently, 27 states and the District of Columbia have some type of school choice measure in place and several states have legislation on the table for it this year.

"If it's done right, it could bring (school) choice to places where it isn't."

Dolan said the issue of federal tax credit scholarships will likely be presented as a part of tax-reform plan and would come up before Congress before the August recess.

On March 3, Trump was joined by DeVos, U.S. Sen. Marco Rubio, R-Florida, and Florida Gov. Rick Scott in a visit to St. Andrew School in Orlando, Florida, to specifically discuss the Florida Tax Credit Scholarship program used by 70 percent of the school's students.

James Herzog, associate for education for the Florida Conference of Catholic Bishops, who took place in the roundtable discussion about the voucher program, said he hopes Congress will look to Florida as an example of how school vouchers benefit students, families, educators and schools.

"On a state level, we really appreciate the school choice program because it makes Catholic education possible to low-income families," he said. Currently, 25 percent of students attending Catholic school in the Orlando Diocese benefit from the Florida Tax Credit Scholarship.

The only federally funded voucher program is the D.C. Opportunity Scholarship Program, which began in 2004 and provides scholarships to low-income children in Washington for tuition at participating private schools.

The program was reauthorized for annual funding March 10 by the House through 2022 appropriations committees will determine how much money the program receives. It still needs to go through the Senate, where a companion bill hasn't been introduced yet.

Leaders of the program told The Washington Post they expect to add hundreds of new students to the program next year because they expect Trump will push for additional funds for it.