How do Americans feel about Catholics, Muslims and Jews? A new study offers insights 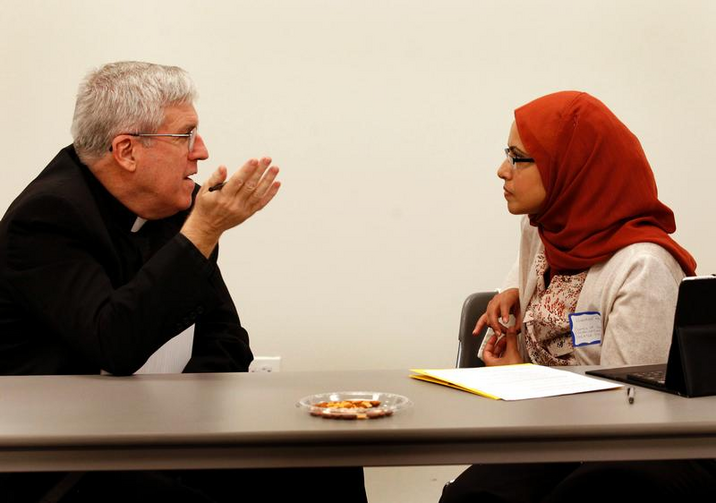 Americans are feeling more positive toward various religious groups than they did less than three years ago.

While Americans still feel less positive about Muslims and atheists when compared with people of other religions, those participating in a Pew Research Center survey in January viewed people in those two religious groups more positively than in June 2014.

The survey overall, part of Pew's American Trends Panel series of studies, found that warmer feelings toward various religions were expressed by people in all of the participating major religious groups. The same holds true when the sample of 4,248 respondents is divided into groups such as Democrats and Republicans, men and women, and younger and older adults.

The study used a "feeling thermometer" that asked 93 percent of the respondents—3,939—to move a slider on a scale from zero to 100 degrees. The remaining 7 percent responded in other ways. The margin of error for the full sample is plus or minus 2.5 percentage points.

Even atheists were rated more highly, rising to 50 degrees from 41 degrees.

The biggest difference in feelings toward Muslims can be seen when the results are reviewed by age. Young adults in the 18- to 29-year-old group rated Muslims at 58 degrees. Americans ages 30 to 40, ages 50 to 64 and older than 65 rated Muslims at 47 degrees, 45 degrees and 44 degrees, respectively.

Young adults, on average, tended to rate all religions within a small range, from 54 degrees for Mormons to 66 degrees for Buddhists. Americans 65 and older responded with a wider rating, from 44 degrees for atheists to 75 degrees for mainline Protestants.

Looking at Catholics, all age groups viewed that group positively, between 64 degrees by the youngest respondents to 71 degrees by the oldest participants. Overall, Catholics were rated consistently across all groupings in the study: in the low- to upper 60s.

The survey also found that Jews and Christians tended to rate each other warmly while atheists and evangelicals viewed each other negatively.

Want to learn more about Islam? Here are some good places to start.
Wyatt Massey

In looking at the responses from self-identified Republicans and Democrats, all religious groups except evangelical Christians saw a growing warmth being expressed toward them.

Ratings for evangelical Christians remained steady among Republicans and Democrats at 71 degrees and 53 degrees, respectively.