What Trump conservatives and refugees both want: a place to call home 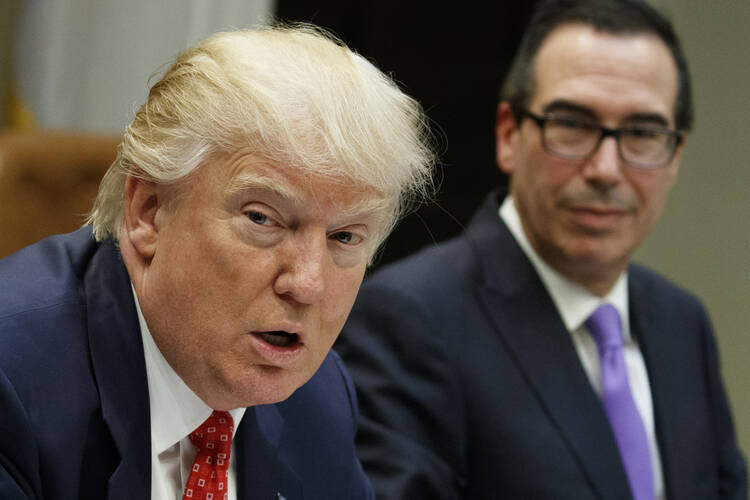 Treasury Secretary Steven Mnuchin listens at right as President Donald Trump speaks during a meeting on the Federal budget, Wednesday, Feb. 22, 2017, in the Roosevelt Room of the White House in Washington. (AP Photo/Evan Vucci)

Classical American conservatism takes for granted that Americans are united by a set of values rather than an ethnicity, race, culture or religion. That is not the conservatism of Donald J. Trump. In many ways—most notably hiseffusive praise for Russian leader Vladimir Putin—President Trump has not-so-subtly signaled his high regard for a more reactionary form of conservatism, one that is highly skeptical of diversity and multiculturalism. For this brand of conservatives, Mr. Putin, and to a degree, the president himself, symbolize what New York Times reporters Alan Feuer and Andrew Higginssummed up as “strength, racial purity and traditional Christian values in a world under threat from Islam, immigrants and rootless cosmopolitan elites.”

Indeed, displeasure with the idea of rootless Americans—citizens who fail to recognize the import of kinship and belonging—colors the rhetoric and priorities of the Trump movement. Steve Bannon, who sits on the National Security Council and serves as a close advisor to Mr. Trump, believes that “strong countries and strong nationalist movements in countries make strong neighbors, and that is really the building blocks that built Western Europe and the United States.” He has also said that Mr. Putin has been wise in “playing very strongly to social conservatives about his message about more traditional values.”

In a2014 talk at the Vatican, Mr. Bannon blamed much of current political angst on society having come “unmoored” from the ethics of our “forefathers,” leading to the empowerment of global capitalists “in New York that feel closer to people in London and in Berlin than they do to people in Kansas and in Colorado.” In other words, the attraction of Mr. Trump’s brand of conservatism is that it recognizes the meaning in place, patriotism and culture rather than dismissing them all as interchangeable and arbitrary. Thus, Trump-esque conservatives reject refugees from abroad not only because “they could be terrorists” but because the mere presence of these outsiders is imagined to weaken the bonds holding this country together.

In itself, valuing kinship and the importance of home isn’t a bad thing.

In itself, valuing kinship and the importance of home isn’t a bad thing: It really is the case that we all have responsibilities to those closest to us, and that the communities that weave the fabric of our lives deserve special attention and priority. And it is likely alsothe case that liberals have, in an effort to emphasize the state’s rightful role in caring for its most vulnerable (say, in terms of health care, elder care and child care) somewhat underplayed the importance of our obligations to those in our families and immediate communities. Yet far from depleting our recognition of the worth of our most primal connections, welcoming refugees underscores how vital those relationships are to human flourishing.

In Leviticus 19:34, God’s words outline this parallel: “The alien who resides with you shall be to you as the citizen among you; you shall love the alien as yourself, for you were aliens in the land of Egypt: I am the Lord your God.” There is more called for here than simple acceptance or neutral toleration; God commands his people to actively love those who sojourn in their land and to treat them as fellow citizens. Why? Not because the Israelites owed the Egyptians for hosting them; it would not make sense to pay back any stranger for a favor done by the Egyptians. Instead, it is because the Israelites had needed the hospitality of the Egyptians to flourish, whether they received it or not. Since it is God’s will that all human beings should flourish, he directs his people to at least try to make up to refugees what they have lost: love, kinship, a sense of belonging, a place to call home.

Aloof tolerance cannot do that. Only love can. This is why Pope Francishas recommended that while countries “must be very open to receiving refugees, but they also have to calculate how best to settle them because refugees must not only be accepted but also integrated.” For Christians faced with the refugee crisis at hand, this is the key lesson: It is not enough to simply allow refugees to cross our borders; we are obligated to do more than that because they have lost more than that. Central to this view is the understanding that nothing can replace families, communities and the connections we all have to our places of origin, but to act in love, we must try. 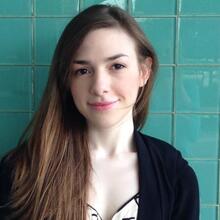 A conservatism that applauds "strength, racial purity, and traditional Christian values" is trying to cover up its belief in militarism and racism with distorted religion. This kind of conservatism is the same old hate in a new bucket and it should be rejected outright. Perhaps Pope Francis was referring to this kind of conservatism when he said it is better to be an atheist than a bad Catholic. A compassionate atheist with common sense does a better job of reflecting God to others than a "conservative Christian" who imagines that Christianity embraces racism and militarism.

Bannon's form of nationalism is economic and not necessarily cultural and definitely not ethnic. But is helps if the culture is nationalistic as well. It has no problems with different ethnic groups as long as they assimilate. One problem with recent integration and especially from the Middle East is assimilation.

One of the few people from the history of Islam that makes sense is a man named Ibn Khaldun who was one of the great minds of all time. He commented on many things but one very important one he said is the essentialness of social cohesion for a productive functioning society. The official term he used is

What Trump and Bannon realize is that there is less and less social cohesion in the country as time goes on and if one wants to save America, there has to be cohesion. The Democrats are doing everything is their power to erode social cohesion. They are much more interested in globalization and a world government which requires the complete elimination of boundaries and social cohesion.

I keep on making a post to this page. This comment that says I have problems gets posted. But not the actual comment. There must be a bug in code some where. The bug seems to come from putting up a webpage reference and also from formatting code so I eliminated these and the post went up. But yesterday it went up with the formatting and then disappeared after a short while.

Dear Mr. Cosgrove — your comments are getting flagged by our moderation system as potentially problematic, so they require individual approval. There are a number of reasons that can happen, but it's likelier to happen when links are included in comments, since spammers often use comments to post links to their own sites as a kind of free advertising. While you're posting the links as citations, it's difficult for the automated systems to tell the difference.

In any case, once the automatic system flags a comment, it's held for moderation. Staff time to moderate comments is limited, so the moderation queue does not get dealt with in real-time — repeated posting of comments is actually counter-productive, both because it adds to the moderation queue and because multiple identical or very similar comments will also tend to cause the automatic system to think that comments are spam or low-quality.

Thanks in advance for your understanding.

Thank you for the explanation.

From as a wikipedia page on asabiyyah or social cohesion.

`Asabiyya or asabiyyah refers to social solidarity with an emphasis on unity, group consciousness and sense of shared purpose, and social cohesion, originally in a context of "tribalism" and "clanism". It was a familiar term in the pre-Islamic era, but became popularized in Ibn Khaldun's Muqaddimah where it is described as the fundamental bond of human society and the basic motive force of history. `Asabiyya is neither necessarily nomadic nor based on blood relations; rather, it resembles philosophy of classical republicanism. In the modern period, the term is generally analogous to solidarity. However, it is often negatively associated because it can sometimes suggest loyalty to one's group regardless of circumstances, or partisanship.

Two of the essentials of Catholic Social Thought is solidarity and subsidiarity which are the essence of conservative thinking. This seems to be what Trump wants to do. He will be fought all the way in this as Democrats wants strong central government that will impose their progressive ideas from above as opposed to from the bottom up.

I suggest all the authors on America read Yuval Levin's book "The Fractured Republic: Renewing America’s Social Contract in the Age of Individualism."

Solidarity means valuing fellow humans and respecting their individuality. Nothing about the travel ban or the desire to get rid of health insurance reflects solidarity. Subsidiarity means doing things at the local level if possible, but local governments are not able to negotiate effectively with multistate and multinational corporations, so the lowest level at which to deal with them is at the national level. Refusing to govern as necessary to keep corporations from stealing from the average citizen is a form of corruption.

Social cohesion is nice and some is necessary to maintain a society, but I grew up in a small town where social cohesion was so high that young people couldn't wait to leave. "Social cohesion" is often a euphemism for "everybody has to live like I want them to live."