What makes religious organizations so effective at diplomatic peacemaking? 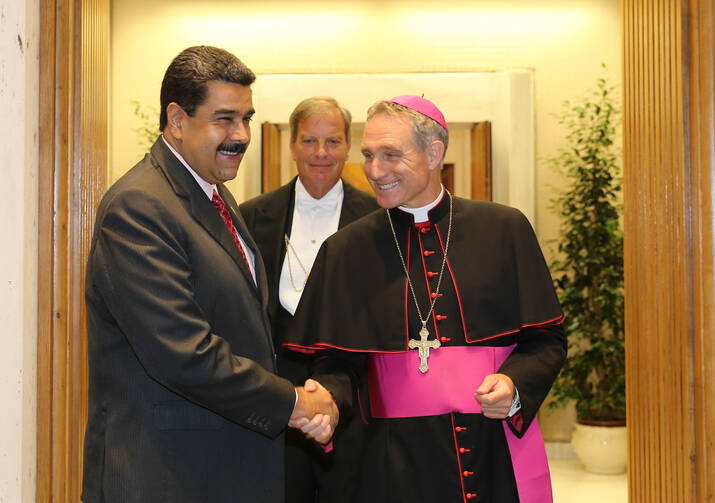 Venezuelan President Maduro is greeted by Archbishop Ganswein prior to a private meeting between Maduro and Pope Francis. (CNS photo/Miraflores Palace handout via EPA)

“Anything worth doing is worth doing badly,” runs one of G. K. Chesterton’s mind-twisting aphorisms.

Chesterton, perhaps the best-known Catholic controversialist of the early twentieth century, was writing to defend the place of amateurs in a world increasingly made up of experts. The line came to mind with media criticism earlier this month of the suspension of Vatican efforts to mediate the conflict between Venezuelan president Nicolás Maduro and his opposition.

The critics’ supposition seemed to be, “leave peacemaking to the specialists.” Religious peacemakers, they apparently believed, are nothing more than well-meaning amateurs.

Vatican diplomats are neither amateurs nor outside meddlers as commentators suggest. But they may be thought to subscribe to a variation on Chesterton’s maxim, namely, “anything worth doing is worth risking failure.”

Coming off the Holy See’s success in talks leading to re-establishment of diplomatic relations between the United States and Cuba and progress on the appointment of Catholic bishops in China, Pope Francis seems to have believed it was worth trying to help resolve the stalemate between Maduro and his opposition, one of the most intractable political problems of recent years.

Even if he had no recent successes to his credit, Pope Francis would have believed it to be the church’s duty to advance the cause of peace and to help alleviate a grave situation of manufactured suffering. As he argued in “The Joy of the Gospel,” dialogue is a condition of peace.

In keeping with that conviction, Pope Francis has now offered afresh to personally mediate the conflict with new talks at the Vatican. Maduro has welcomed the initiative: “Hopefully, it will happen soon,” and the two delegations will “give one another a hug.” The opposition has responded with four pre-conditions it wants satisfied before it will resume talks.

Venezuela is in dire straits. It is suffering 800 percent annual inflation. Foodstuffs, medications and toilet paper are hard to obtain. They are beyond the means of ordinary people to purchase, and with store shelves and warehouses bare, even the rich lack access to basic supplies. Last fall, the government stubbornly rebuffed an offer from former secretary of state John Kerry to provide emergency relief aid to the country.

Vatican Joins in Venezuela Mediation
From AP, CNS, RNS, Staff and other sources

Venezuela is a failed state. Under the late strongman Hugo Chavez, the oil-rich South American country has become an abortive experiment in Bolivarian socialism. If the international system were functional, the UN could treat Venezuela as a candidate for intervention under the doctrine of the ”responsibility to protect” (R2P) because of the government’s failure to “protect” its people from debilitating deprivation.

Complaints that the Holy See should not involve itself in other people’s problems—like the last-ditch effort to rescue Venezuela from itself—are wrong-headed. The Vatican showed its seriousness by assigning as lead negotiator one of its most senior diplomats, Archbishop Claudio Maria Celli, a highly intelligent, affable man with proven achievements in agreements with Vietnam and China.

Critics’ notion that the talks extend the Maduro government’s hold on power is wrong. Its intervention had, in fact, been invited by Maduro’s parliamentary opposition to break through a domestic political stalemate.

Religious groups, including the Holy See, frequently help resolve conflicts that have evaded solution by political actors. Under St. John Paul II, the Holy See successfully mediated the Beagle Channel dispute between Argentina and Chile. That diplomatic effort is now a case study for Harvard’s Kennedy School of Government.

In 1992, the community of Sant’Egidio supported the late Archbishop Jaime Gonçalves in negotiating an end to the two-decade-long civil war in Mozambique.

More recently, Catholic bishops in the Democratic Republic of the Congo helped their country avert civil war and re-schedule threatened elections. Likewise, the bishops of Colombia played a significant role in sustaining the dialogue between that country’s government and the FARC rebels that led to a peace agreement after more than 50 years of civil war.

The Holy See, with a cadre of experienced diplomats like Celli, is especially prepared for undertaking mediation and peacemaking initiatives, but it is by no means the only religious actor engaged in that way. Quakers offered their good offices to mediate during the Nigerian civil war. Mennonite activists, such as Witness for Peace in Guatemala and Christian Peacemaker Teams in Palestine, provided third-party protections for vulnerable populations under conditions of civil war and occupation.

Religious initiatives are likely to take place where political and established social institutions have repeatedly failed to resolve underlying tensions or to bring peace to divided societies.

The secularist presumption of the omni-competence of political institutions should not be allowed to deny long-suffering victim populations—like that in Venezuela—efforts by the Holy See or other religious actors to attempt to bring peace to their divided societies. The persistence of religious actors like Pope Francis gives peace a chance when the rest of the world just shrugs and lets calamity unfold.

This essay was published by the Berkley Center for Religion, Peace and World Affairs at Georgetown University.