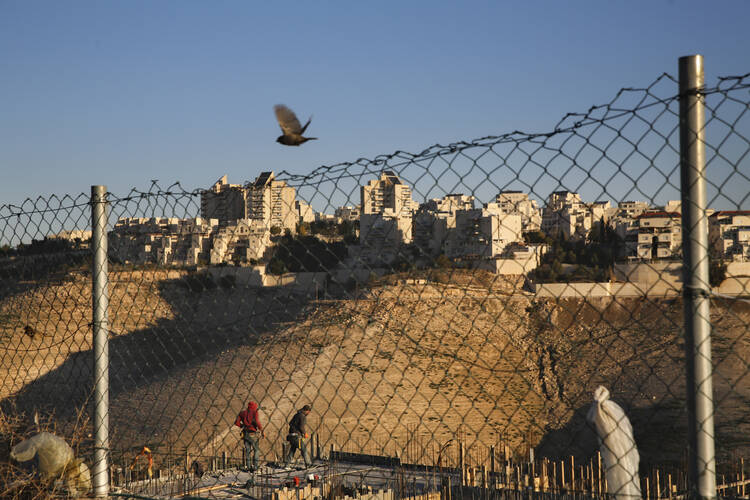 Palestinian laborers work at a construction site in a new housing project in the Israeli settlement of Maale Adumim, near Jerusalem, on Feb. 7, 2017. (AP Photo/Oded Balilty)

Adalah and the Jerusalem Legal Aid and Human Rights Center appealed to the high court, asking it to block implementation of the bill passed in parliament this week that sets out to legalize dozens of settler outposts built on privately owned Palestinian land.

The bill sparked heavy criticism both in Israel and abroad, with critics saying it amounts to legalized land theft. They also said it's legally problematic as it seeks to impose Israeli law on occupied land that is not sovereign Israeli territory and where its Palestinian residents do not have citizenship or the right to vote.

"This sweeping and dangerous law permits the expropriation of vast tracts of private Palestinian land, giving absolute preference to the political interests of Israel," said Suhad Bishara, an attorney for Adalah.

Proponents claim the communities, some decades old and home to thousands of people, were built in "good faith" and quietly backed by several Israeli governments.

The Palestinians seek the West Bank and east Jerusalem, captured by Israel in the 1967 Mideast war, as parts of a future independent state. Most of the international community considers Israeli settlements illegal and counterproductive to peace. Some 600,000 Israelis now live in the two areas.

The law, which was adopted by the Knesset on Monday, is the latest in a series of pro-settler steps taken by Israel's hardline government since the election of Donald Trump as U.S. president.

In all, the law would legalize some 3,900 homes built on private Palestinian land — about 800 in unauthorized outposts and the remainder in recognized settlements. The original landowners would be eligible for financial compensation of 125 percent of the land's value, as determined by Israel, or a comparable piece of alternative property.

The United Nations as well as key allies like Germany, Britain and the Czech Republic condemned the legislation.

European Union foreign policy chief Federica Mogherini warned that "should it be implemented, the law would further entrench a one-state reality of unequal rights, perpetual occupation and conflict."

Amid a slew of international criticism, the Trump administration was conspicuously quiet about the law ahead of a trip to the White House by Israeli Prime Minister Benjamin Netanyahu next week.

Israel's attorney general, Avichai Mandelblit, has said he will not defend it in court. Netanyahu has also expressed misgivings about the bill, reportedly saying it could drag Israel into international legal prosecution, though in the end he agreed to support it.