What would Jefferson say about today's America? 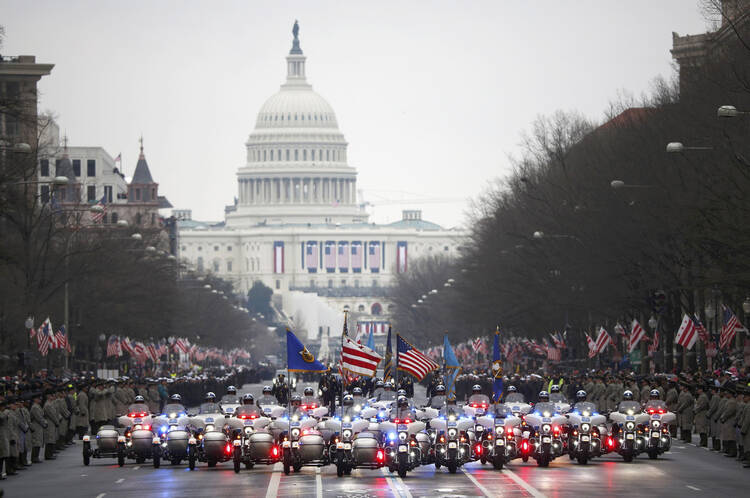 Motorcycle police lead the inaugural parade for U.S. President Donald Trump Jan. 20 after his swearing-in as the country's 45th president at the U.S. Capitol in Washington (CNS photo/Joshua Roberts , Reuters).

A stroll past The Library Company of Philadelphia earlier this winter brought me face to face with some Philly history: a statue of Benjamin Franklin in the window. Much damaged by the elements, the statue is missing Franklin’s inverted scepter (signaling his contempt for royal tyrants) but retains the tall stack of books upon which the famously learned Founder leans. In an amusing bit of historical irony, the business two doors down from the statue is “British Imperial Cleaners.”

Oh, and one other thing: Benjamin Franklin is wearing a toga.

You read that right. Commissioned in 1789 by William Bingham and sculpted by Francesco Lazzarini, the statue is actually our nation’s first public monument, and stood for years above the entrance to the former Library Company building near Independence Hall. Its size (over eight feet) and material (white Cararra marble) suggest an homage to a royal figure, only accentuating the irony of Franklin holding the scepter of imperial authority upside down. And his toga (worn over some 18th-century duds, natch) traces a lineage for the new nation—not to the British Empire, but to the Republic of Rome and the democratic institutions of classical Athens. The iconography is clear: to hell with your king.

Successive generations of artists and planners would stretch those metaphors of a Second Rome or a New Athens almost to the breaking point, particularly in their efforts to avoid imitating Christian church motifs, and so our national monuments are largely neoclassical. Thomas Jefferson wanted the U.S. Capitol to evoke Rome’s Pantheon. The Second Bank of the United States looks like a Greek temple, and even the 20th-century Supreme Court meets in a Roman one. We finally jumped the shark in 1841, when a statue was installed in the U.S. Capitol Rotunda of George Washington as a 12-ton bare-chested Greek god. It scandalized visitors for two years before someone moved the campy monstrosity to the east lawn.

Our forebears had historical precedent, of course, in emphasizing their difference from Great Britain; the Romans themselves tried the same move to distinguish themselves from the Greek culture from which they forever borrowed. Many classicists interpret Virgil’s Aeneid to be an epic propaganda campaign from its first line to its last, to show Rome’s foundations were specifically not of Greek origin (Aeneas being, after all, “first from the shores of Troy”).

Such works of imagination do not only distance a culture from its colonizers, however. Monuments and literature that invoke former epochs also exhort a citizenry to identify with the replacement culture being imitated. Those early American planners, architects and sculptors didn’t just want to remind us that we weren’t British colonial subjects anymore. They also wanted to recall the virtues of Athens and Rome (at least as they imagined them): a valorization of self-sacrifice, an emphasis on communal duty, a suspicion of luxury, a belief in reason and natural law and a focus on human liberty.

As we look back on the inauguration of our new president on the steps of the Capitol Building last week, it is worth remembering the desires and virtues of those founders. What would Thomas Jefferson, who died with volumes of Seneca and Aristotle open at his bedside, who thought classical architecture so important to the American genius, want the Capitol backdrop to convey to the new president and others in attendance? Would he have found the aforementioned virtues present in that assembly?

Perhaps more importantly, what perils would Jefferson and Franklin warn us against? After all, democracies do die, and republics can rather abruptly transform into empires. The Athenian democracy was overthrown twice during Socrates’ lifetime alone. The Roman Republic collapsed at its most prosperous hour, its senators reduced with astonishing speed to ceremonial figures beholden to an Emperor. As Jefferson and Franklin both knew, to imagine ourselves heirs to Republican Rome means we also must not pretend our republic is immortal just because it is exceptional.

What would their advice be? Perhaps to remember and rely on those practices and beliefs that made America good. And not to put too much trust in the promises of those who would make us great again.

James T. Keane, a former associate editor at America, is an editor at Orbis Books in Maryknoll, N.Y.