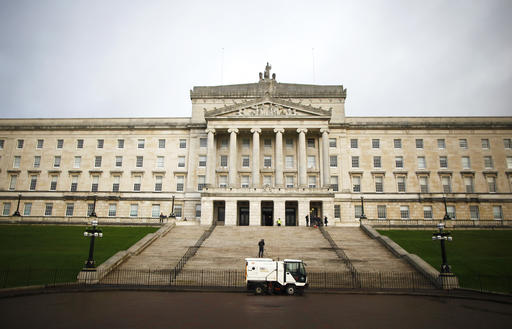 Northern Ireland's shattered unity government will be dissolved next week to make way for an early election demanded by the coalition's main Irish Catholic party, the secretary of state for the British territory announced Monday.

The warring parties face a potentially brutal election that could determine whether their unity government — centerpiece of Northern Ireland's peace accord—can ever be put back together again.

Brokenshire appealed to both camps not to make their relationship even worse with bitter accusations on the campaign trail.

"While it is inevitable that debate during an election period will be intense, I would strongly encourage the political parties to conduct this election with a view to the future of Northern Ireland and re-establishing a partnership government," Brokenshire told reporters at Stormont Castle, the center of power-sharing in Belfast.

At stake is the resurrection of cross-community government, a goal sought by generations of peacemakers as the most logical way to end a conflict that has claimed 3,700 lives since the late 1960s.

Against the odds of history, a government led jointly by the Democratic Unionists and Sinn Fein took office in 2007 and, until recent months, had governed the long-disputed corner of the United Kingdom with surprisingly few blow-ups.

Sinn Fein says it forced the government's collapse to protest the refusal of the Democratic Unionist leader, First Minister Arlene Foster, to step aside voluntarily.

As they left Stormont, Sinn Fein leaders accused the Democratic Unionists of poisoning their partnership by treating them abusively and refusing to be held accountable for the bungling of a "green energy" program overseen by Foster.

The program is expected to cost Northern Ireland, a land of barely 1.8 million citizens, 500 million pounds ($600 million) in ill-regulated and open-ended subsidies.

"There can be no return unless there's fundamental change in how the DUP approach power-sharing," Sinn Fein lawmaker Conor Murphy said.

Foster, who was forced from office when Sinn Fein counterpart Martin McGuinness resigned a week ago, accused Sinn Fein of pursuing another election barely 10 months after the last one to advance its own political ambitions.

Analysts agree that Sinn Fein hopes to overtake the Democratic Unionists and become Northern Ireland's No. 1 party for the first time, gaining the symbolically potent right to hold the post Foster previously held.