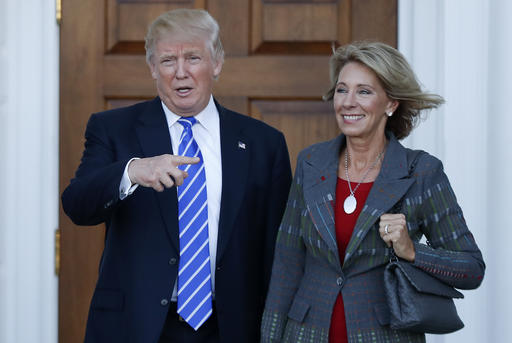 Republican donor and school choice advocate Betsy DeVos says a one size-fits-all model of learning doesn't work and that she would promote charter, magnet, religious and other alternatives to public schools, if confirmed education secretary.

But facing scathing criticism from teachers unions, who say she is seeking to destroy public education, DeVos also promised to be a "strong advocate for great public schools," which provide instruction to more than 90 percent of the country's students.

"Why, in 2017, are we still questioning parents' ability to exercise educational choice for their children?" DeVos said in remarks released by the Senate Health, Education, Labor and Pensions Committee ahead of Tuesday's confirmation hearing. "I am a firm believer that parents should be empowered to choose the learning environment that's best for their individual children."

DeVos, 59, also said she will seek to address rising higher education costs and massive student debt, but also advance trade and vocational schools as well as community colleges because "craftsmanship is not a fallback — but a noble pursuit."

Another priority for DeVos will be weakening "burdensome" federal regulations and giving local communities greater control over education policies.

"President-elect Trump and I know it won't be Washington, D.C. that unlocks our nation's potential, nor a bigger bureaucracy, tougher mandates or a federal agency," DeVos said. "The answer is local control and listening to parents, students and teachers."

DeVos, the wife of Dick DeVos, the heir to the Amway marketing fortune, has spent more than two decades advocating for charter schools in her home state of Michigan, as well as promoting conservative religious values.

DeVos' candidacy has been met with fierce opposition for labor unions, Democrats and civil rights groups.

She and her family have donated millions of dollars to Republican politicians and groups over the years, including campaign contributions to several committee members. And DeVos has not finalized her financial and ethics disclosures ahead of the hearing, prompting criticism from Democrats.

Sen. Patty Murray of Washington, top Democrat on the committee said in a statement Tuesday that she wants DeVos to answer questions about her "extensive financial entanglements and potential conflicts of interest" and also to provide additional information about her finances, calling her disclosures incomplete. Murray lamented that DeVos has spent her career and wealth "fighting to privatize public education and gut investments in public schools."

"Over the course of her career as a major campaign contributor, soft-money donor, and lobbyist, DeVos has used her considerable wealth to influence legislation and the outcomes of elections to advance policies that have undermined public education and proved harmful to many of our most vulnerable students," the letter said.

LGBT groups also have protested Trump's choice of DeVos, saying she has funded conservative religious groups that promote traditional family values, including one organization that supports conversion therapy—counseling of gay, lesbian, bisexual or transgender people with the aim of changing their sexual orientation.

In an apparent response to that criticism, DeVos said in her statement, "Every child in America deserves to be in a safe environment that is free from discrimination."

"I believe Betsy DeVos has the talent, commitment, and leadership capacity to revitalize our public schools and deliver the promise of opportunity that excellent education provides, and I support her nomination as U.S. Secretary of Education," Moskowitz said in a statement.

Show Comments (
1
)
Comments are automatically closed two weeks after an article's initial publication. See our comments policy for more.
Lisa Weber
3 years ago
So the CEO of a charter school company endorses an unqualified candidate. I am not impressed.
Advertisement
More: Donald Trump / US Politics / Education