While Mexicans angered by hike in gas prices protest, a call for political change 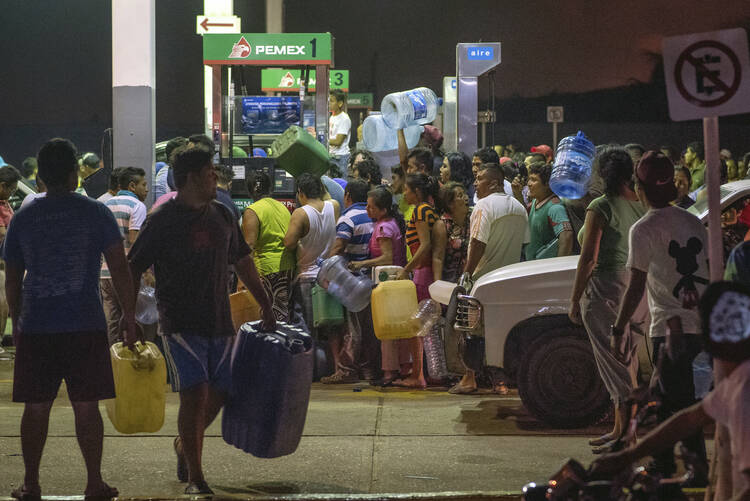 A wave of social unrest has taken hold of Mexico in recent days, as angry protests over a severe hike in gasoline prices have descended into sporadic looting, riots and blockades of highways and petrol stations across the country. Hundreds of people were arrested after ransacking stores and clashing with police in central Mexico and even vandalizing the governmental palace in Monterrey, one of the nation’s largest cities, on Jan. 5.

“People are very upset,” said Rodolfo Soriano-Nuñez, a sociologist and political commentator. “I haven’t seen such an outburst of nationwide anger in many years.”

The protests further erode what little support the already deeply unpopular government of President Enrique Peña Nieto, who assumed office in 2012, has left. Plagued by corruption scandals, a spike in criminal violence, tepid economic growth and criticism of his administration’s human rights record, his approval rating is the lowest of any Mexican president since the early 1990s.

The unrest first erupted on New Year’s Day, after the government announced a sudden increase in gasoline prices of up the 20 percent, set to be introduced in phases throughout the year and across designated regions. Prices will be ultimately decided on a daily basis.

Popularly called “gasolinazo,” the price hike is a consequence of the government abandoning a decades-old scheme of heavily subsidizing gasoline and diesel as part of an energy reform promoted by Mr. Peña Nieto and signed into law in 2013. But the gasolinazo coincides with rising global oil prices and it comes just as gasoline scarcity struck petrol stations across the country. The state-run oil monopoly Pétroleos Mexicanos saw its refinery capacity drop to critical levels in recent months.

In December, customers in some cities desperate for fuel were forced to wait for hours at service stations or had to drive across town to find a way to fill their tanks. The gasolinazo brought the anger and frustration over the fuel scarcity to a boiling point.

Almost immediately, angry protesters began blocking access to service stations, expressways and thoroughfares in dozens of major cities across the country. Lootings and gas theft soon followed. According to business organizations, more than a thousand stores have been ransacked, causing millions of dollars in damages.

So far, at least two looters in Veracruz state and a police officer who attempted to prevent gas theft in Mexico City have died in the mayhem. As panic over the possibility of violence spread on social media in the capital, the army began patrolling certain neighborhoods on the night of Jan. 4 to maintain order.

The unrest shows no signs of winding down. More protests are expected on Jan. 6 and over the weekend.

“The only one responsible for what is happening in the country is Enrique Peña Nieto and his sheaf of accomplishes who stole everything from us,” wrote the Rev. Alejandro Solalinde, one of the country’s most vocal priests, on Twitter on Jan. 5.

The energy reform, which deregulates the gasoline market and opens Mexico’s vast oil wealth to foreign investment, has been a long time coming, as Pemex has seen a steady decline in oil production since its peak in 2004. Lack of efficiency, a powerful union racking up steep benefits for its members and stifled innovation ground production at Pemex’s old refineries to a halt, forcing it to import most of its gasoline. The state oil and gasoline producer has been crushed by $100 billion in debt.

In recent days, government officials attempted to justify the price hike, arguing that the subsidies scheme mostly benefits owners of gas-guzzling SUV’s. And with oil exports being the most important source of income for the federal government, they say the energy reform is necessary to guarantee macroeconomic stability.

“I know there is much annoyance and anger because of this situation. Those are feelings I understand,” Mr. Peña Nieto said on Jan. 5 in his New Year’s address to the nation. “But trying to maintain the artificial price of gasoline would have forced us to cut social programs, raise taxes or increase the country’s debt, placing at risk the stability of the economy as a whole.”

But even if both the government and many observers point out that an energy reform was necessary, Mexicans have not forgotten that they were promised cheaper gas and electricity prices. The exact opposite is happening; not only will fuel be more expensive, the state monopolist Federal Electricity Commission announced electricity prices will rise because of the gasolinazo.

Other basic goods and services, such as food and public transportation, are also expected to become more expensive this year. It would add insult to injury for Mexicans, half of whom live in poverty and whose purchasing power, according to a recent investigation by the website Animal Político, has dropped by more than 10 percent since 2013.

“What I am currently seeing, is that people, for the first time in years, are very angry about what they perceive to be the lies of the president, the cabinet and the elected officials who voted in favor of the energy reform,” said Mr. Soriano-Núñez.

For the president, the consequences may be dire. Although he is constitutionally barred from reelection next year, his ruling Party of the Institutional Revolution (P.R.I.) may well suffer a serious setback when several major states hold elections for the governorship this summer.

One of the states at play is Estado de México, the country’s most populous with 16 million inhabitants, which curls around Mexico City like a horseshoe. “Edomex,” as it is popularly known, has been ruled by the P.R.I. for eight decades; Mr. Peña Nieto himself was the state’s governor before his presidential run in 2012.

Considered to be an electoral crown jewel, losing Edomex could be the prelude to a crushing defeat in next year’s presidential election. According to several recent polls, a coalition of the conservative National Action Party and the social democrat Party of the Democratic Revolution (P.R.D.) has a chance of defeating the P.R.I.

Moreover, the leftist former Mexico City mayor and two-time presidential candidate Andrés Manuel López Obrador, who abandoned the P.R.D. several years ago to form his own party, the Movement for National Regeneration, has taken the lead in some polls for next year’s election. Running on a platform of social justice and redistribution of wealth, many observers believe the gazolinazo will strengthen his chances for victory.

The protests have also energized the leaders of a plethora of grassroots and social movements, who hope to channel the popular anger into achieving political change. Interviewed on Jan. 6 by the website SinEmbargo.com, Bishop Raúl Vera of Saltillo said Mexican society has spent years “reflecting and mobilizing” and called for a “new social pact.”

“We first need a real political pact that would guarantee to the nation that it would be a truly representative democracy, because right now it’s not even that,” Bishop Vera said. “How are the thugs who approved the energy reform going to represent the country?”

@Jahootsen
Show Comments (
1
)
Comments are automatically closed two weeks after an article's initial publication. See our comments policy for more.
ed gleason
6 years ago
What's the price per gallon in USD and how much is tax?