Genocide, crucifixion and rape: What Christians are facing in the Middle East 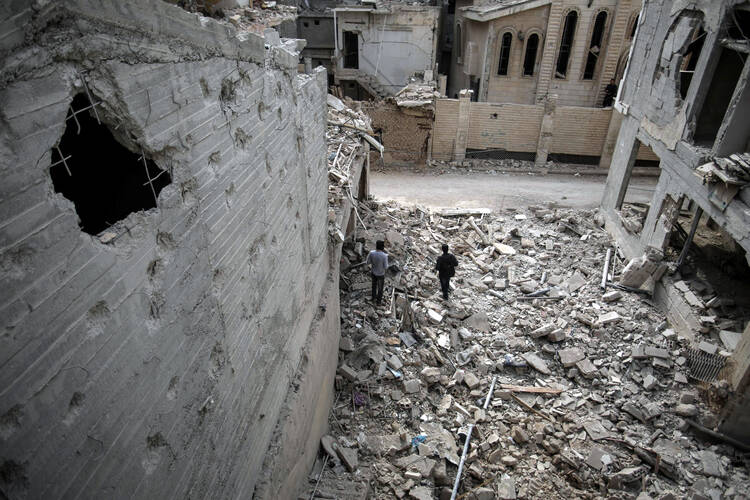 Over the course of 120 years living as Christians in the Middle East, Juliana Taimoorazy's family has lost eight members to persecution “for their Christianity, for being Assyrian,” she said. Similarly over the last decade the Assyrian Christian population in Iraq has been decimated.

“I am very aware that my ethnicity is dying,” Ms. Taimoorazy said, warning Assyrians could see their culture melt away if regional persecution is not stopped.

Once a refugee herself, having fled from religious persecution in Iran in 1989, Ms. Taimoorazy has dedicated her career to advocacy for persecuted Christians in Iraq and refugees who have resettled in the United States. Founder of the Iraqi Christian Relief Council, she shared her personal story during a panel at "The Crisis for Christians in the Middle East," a conference on Dec. 5 at the Sheen Center in New York City.

The conference, sponsored by the Anglosphere Society—described as a membership organization dedicated to strengthening the ties between the United States, United Kingdom and the English-speaking world—featured discussions of strategies for confronting what has been called a Christian genocide in the Middle East and to promote liberty and justice in the region.

“We see this evening as the first step in a long journey,” said Amanda Bowman, founder of the Anglosphere Society.

During the first panel, moderated by Michael Reynolds of Princeton University, Jack Tannous, also of Princeton, and Msgr. John E. Kozar, president of the Catholic Near East Welfare Association, discussed how the status of Christians in the Middle East has changed over time.

Dr. Tannous explained that Christianity has deep roots in the Middle East. In fact, the area was the “center of gravity for Christendom for much of the medieval period.”

“The church continues to accompany people in the Middle East even now,” Msgr. Kozar added before describing the troubling state of affairs in Lebanon, Jordan, Egypt and Iraq. The church in the Middle East remains active in education and healthcare; while most of the clientele are Muslims, the institutions themselves “represent the values of Christ.”

The second panel, moderated by Robert Nicholson of the Philos Project, which describes itself as a network for leaders and future leaders committed to promoting positive Christian engagement in the Middle East, dealt with current conditions for Christians in the troubled region.

Nina Shea of the Hudson Institute recounted her studies on the behavior of the Islamic State of Iraq and Syria. ISIS has tried to present itself as a new caliphate by maintaining a pretense of a jizya, a tax that allows people of the book (Jews and Christians) to live out their faith in Muslim countries, according to Ms. Shea. Meanwhile ISIS propaganda elsewhere advances anti-Christian hatred.

In a recent study, Ms. Shea found that every case where Christians remained in unstable areas resulted in tragedy: people crucified, women kidnapped and raped and children sold into slavery.

Asked how to respond to the persecution of Christians in the Middle East, Ms. Taimoorazy suggested U.S. support for the establishment of a province for religious minorities in Iraq.

Concerned with the recently liberated Christian towns on the Nineveh plains of Iraq, which have been 70 to 80 percent destroyed, Ms. Shea supports reconstruction aid efforts. Unfortunately, of the $1.1 billion dollars in humanitarian aid to Iraq last year, very little has actually reached the Christians of Nineveh.

Ms. Arriaga de Bucholz supports “trust but verify” policies to protect the persecuted, urging ordinary Americans to call their elected officials: “Make sure that your elected officials are committed to the same freedom that you are.”

“As people grapple for power—especially in Iraq and Syria—they try to create fervor,” General Raymond Odierno, Ret., 38th Chief of Staff of the Army, said in the third session of the evening, “And a powerful way to create fervor is with religious extremism.” Ironically this extremism leads to religious intolerance, which has weakened government control in Iraq and Syria.

General Odierno supports multinational cooperation for the creation of a safe haven for persecuted peoples in the Middle East, which can remain in place until the governments of these nations can impose the necessary structures to protect their citizens.

Ambassador Ronald S. Lauder, president of the World Jewish Congress, recounted his efforts to stand up for the persecuted Christians of the Middle East. “What brings us together is a serious subject that should be on the cover of every newspaper in the world,” he said. “One of the greatest crimes is taking place, and no one seems to know about it.”

“I am glad Secretary Kerry has rightly declared the actions of ISIS as genocide,” Mr. Lauder continued, after drawing parallels between current events and those of the holocaust. “My deepest hope is that this conference energizes its audience to do something about this mass murder.”

The closing remarks were given by Cardinal Timothy M. Dolan of New York. The cardinal told the audience, “All of you have helped me keep a solemn promise.”

When bishops from the Middle East come to him, he explained, “They don’t say a lot, but they do unfailingly cry.

In her final statement, Ms. Bowman quoted philosopher and statesman Edmund Burke: “Nobody made a greater mistake than he who did nothing because he could do only a little.”

The event was intended as the first in a series of events on interreligious dialogue held at the Sheen Center.