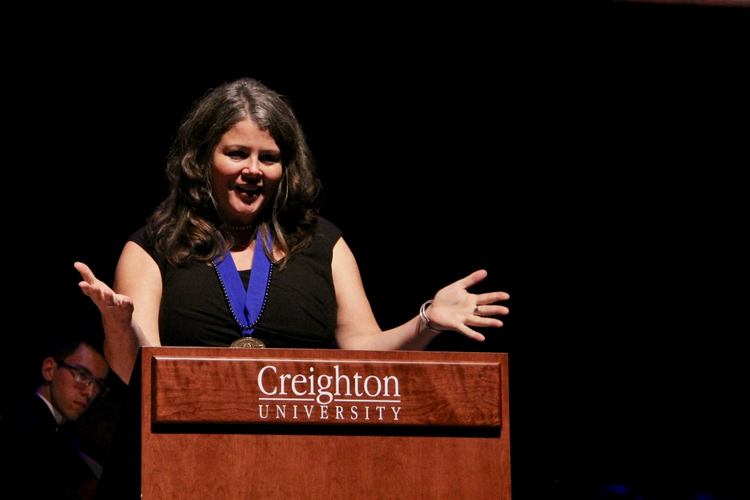 Sari Bari won the $1 million Opus Prize for humanitarian social entrepreneurship on Thursday night in Omaha, Nebraska. The company, based in Kolkata, India, offers an employment alternative for women in the commercial sex trade by employing at-risk women who create bags, blankets and other accessories from recycled saris, a typical Indian female garment.

Sarah Lance, co-founder of Sari Bari, said the prize allows the company to establish more production sites, employ more women and better support current employees, all to help push against the tide of sex trafficking in India and around the world.

The Opus Prize is awarded each year to a faith-based individual or organization changing lives in the world. Creighton University hosted the celebration, which included a week of events for students to interact with the three award finalists. Fr. Daniel Hendrickson, S.J., president of Creighton, said the week was a much-needed example of global outreach and service at a time of political division in the United States.

"This (week) has galvanized the campus around hope and inspiration," he said, adding Opus's mission to elevate unsung heroes around the world inspired him.

Behind the red doors of its production sites in India, Sari Bari offers a place where women can rescue themselves from the sex trade. The company operates four production sites, three of which are in red-light districts in Kolkata. The other production site is located outside of the city and employs mothers whose daughters are at risk of joining the sex trade because of poverty.

“We’re a business, but we’re also a community and family,” Lance said. “We’re not just a job.”

At least 20.9 million adults and children are part of the commercial sex trade around the world, according to Equality Now. “A woman is trafficked every eight minutes,” Lance said. In India, around 3 million women are trafficked, 40 percent of which are minors.

While Sari Bari is not a rescue organization, the company provides a living wage, literacy training, health care and child care for the 120 women it employs.

Each product features a tag with the name of the woman who did the hand stitching, which can be a long, difficult process. A woman can complete several bags a day, but a blanket for a king-sized bed can take several weeks because of the amount of hand stitching. The tag promotes a sense of connectivity between the creator and the customer, Lance said. Two days a week, a production site is open to customers who may be able to meet the woman who made their purchase. “The women really appreciate when they get that interaction,” Lance said.

Other customers write notes of appreciation on the website, which Lance passes along to the employees. Each Sari Bari product also comes with a number, which customers can enter on the company’s website to learn more about the woman who made the piece.

The organization’s unique products and mission of freedom created a loyal customer base, which helped expand the company’s revenue and product lines. Sales grew from roughly $66,000 in 2012 to nearly $168,000 in 2015.

Lance said she never expected the company would be so strong after nearly 11 years of business. While she started sewing at age 12 and held positions as an administrator and bookkeeper, Lance had no experience starting a business when she co-founded Sari Bari in 2006. Her college degree was in fine arts. She feared the company would fold the entire first year.

“I had just promised three women freedom from the sex trade and I realized what a huge, huge commitment that was,” she said. “It’s all seemed impossible, but it’s possible because the women are really committed to their freedom.”

Longtime Sari Bari employees hold management roles in the company. These women are able to transfer company culture to new production sites, Lance said. Experienced women also help Sari Bari find new employees. Despite being free from the sex trade, many employees continue to live in the red-light districts. The women have built their lives in the area and can encourage other women to seek freedom, Lance said.

“They are basically prophets for hope and for freedom for other women,” she said. “They are brand ambassadors. They are the missionaries.”

The Opus Prize will allow Sari Bari to expand its company and raise brand awareness, Lance said. More women will learn that their lives matter. She also wants to create more education opportunities for the women and support like-minded companies to “continue to build the dream of freedom,” she said.

Kyle Scott, director of Sari Bari USA, praised Lance’s dedication to creating jobs to empower and provide dignity to women. “Sarah has created a company that promotes upward mobility,” he said. "It's beautiful to see her celebrated."

Lance's mother, Ceci, said Lance changed the lives of her family by being a steadfast example of love. Hearing about the Opus Prize finalists filled her with hope, she said. "I'm just so thankful to see all that God is doing in the world."

The other Opus Prize finalists—Jesuit Worldwide Learning and Cana Communities—received a $100,000 award for their nominations. Jesuit Worldwide Learning is a collaboration of universities, organizations and companies, providing higher education to people living on the margins around the world. Cana Communities manages transitional homes and shelters, along with a farm, in Sydney, Australia to build community for people who are formerly incarcerated or are suffering with addiction, mental health issues or homelessness.

A team of two students and one faculty member from Creighton, along with Opus Prize board members, visited the three finalists in their respective places of work. The Opus Prize board determines the winner based on its values of social entrepreneurship, transformational leadership, sustainable change, faith, unsung heroes and a life of service.

Creighton students interacted with the Sari Bari leaders and other Opus finalists during a week of events entitled “Restoring Hope, Lighting the Way Home.” The week included classroom visits, student-led panel discussions and an interfaith prayer service. Joey Kimes, assistant director of leadership programs in the Student Leadership & Involvement Center, said the events provide an opportunity for students to reflect on how they can meaningfully engage with the world.

Clara Jace, a Creighton senior studying economics and marketing, said the finalists inspired conversations with people outside her friend group and about topics that are impacting the world. Jack Schaaf, a sophomore studying finance and economics, said he was inspired by hearing how the finalists’ careers started and why they continue to work. “It’s great for freshmen and sophomores to hear what drives someone,” he said.

Wyatt Massey is an O'Hare Fellow at America Magazine.