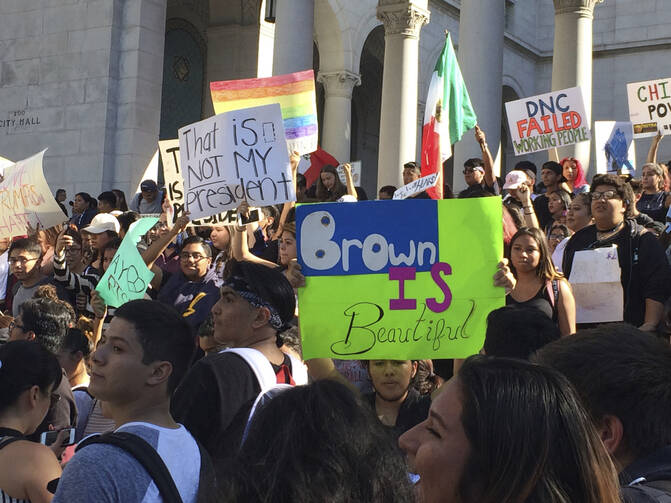 The response to the “60 Minutes” story in Los Angeles, where one million of the nation’s estimated 11 million undocumented immigrants live, has been immediate and clear. “We are not going to engage in law enforcement activities solely based on someone’s immigration status,” Los Angeles Police Department Chief Charlie Beck told the L.A. Times on Nov. 14. ”We are not going to work in conjunction with Homeland Security on deportation efforts. That is not our job, nor will I make it our job.

“This is the same L.A.P.D. you had Monday, a week ago. We have not changed because of the election on Tuesday. We have the same principles. We have the same values. This is not going to change the way that the Los Angeles Police Department enforces the law.”

Steve Zimmer, the president of L.A. Unified School District’s Board of Education, likewise declared that L.A. city schools will not cooperate with the deportation of its students. “We, like the L.A.P.D., are not cooperating and will not cooperate with immigration services who might want to interview or work with students who are at a school site,” he said. The school district’s student population is 74 percent Latino. Since February, the school board has designated its schools as “safe zones,” blocking Immigration and Customs Enforcement agents from onsite visits without a prior review process.

The city of Los Angeles has a long history of protecting the rights of the undocumented. Since 1979, the L.A.P.D. have been prohibited from questioning people for the sole purpose of discovering their immigration status, a measure undertaken so that the undocumented could report crimes without fear of being deported. Under Chief Beck, the department has also stopped turning over people arrested for low-level crimes to homeland security and does not honor federal requests to detain people beyond their jail terms so that they can be deported.

On Nov. 15 over 1,000 L.A. district students staged a walk-out and marched to City Hall to protest Mr. Trump’s comments on deportation. The protest was peaceful and without incident; another is planned for Nov. 16.

Mr. Zimmer called on protesting students to work with school leaders to stay safe. “We also say to you that the best way to repudiate the hate that was directed at you during this campaign is to also march towards that graduation stage and to march towards your rightful place in the university system of this state.”

Among local advocates for the undocumented grief is quickly turning into positive action. Marissa Montes is co-director of the Loyola Immigration Justice Clinic, a collaboration between the Loyola Law School, Loyola Marymount University, Homeboys Industries and Dolores Mission Church in Los Angeles.

After a week that was “very much a mourning period within the advocate community,” Ms. Montes said that at a meeting on Nov. 15 advocates “started to become motivated and angry and aggressive in a sense—ready to fight through civic engagement, taking issues to the courts.”

“War has very much been declared on our communities,” she said. “And not just on immigrant communities but minority communities, women and others, and it’s been made very clear to us that they’re not here to play nice, so we aren’t going to either. We’re going to come together and push through this as a team.”

The question, of course, is what impact the stance of the city’s school district or police department may have if the federal government tries to deport undocumented immigrants in Los Angeles. Ms. Montes believes the L.A.P.D. resistance will have an effect: “Most often people get arrested for state crime, not federal crime.”

As a matter of course states generally share that information with the federal government, but they are not required to. If the L.A.P.D. does not pass along information about an undocumented immigrant’s involvement in a petty crime that person will be shielded from deportation.

A state might also refuse to participate in other ways, like declining to rents its local jail beds to I.C.E. to house immigrants it is preparing to deport, a not-uncommon practice that has meant additional federal money to states.

“But,” Ms. Montes counsels, “that doesn’t mean federal agencies can’t come in and conduct raids on their own. That is their right.”

In a prayer service on Friday, Los Angeles Archbishop José Gomez—elected Vice President of the U.S. Catholic Bishops’ Conference on Nov. 15—likewise offered strong words on the status of the nation’s undocumented. “Right now—all across this city, and in cities all across this country—there are children who are going to bed scared. There are men and women who can’t sleep because they are trying to figure out what to do next. Trying to figure out what to do when the government comes to take them away from their kids and their loved ones.

“More than 2 million people have been deported in the last eight years. Nobody seems to care. Except that little girl who comes home at night—and she knows her father isn’t there anymore. We are better people than this. We should not accept that this is the best we can hope for.

For those who are undocumented, Montes offers this advice:

1) Don’t panic. It’s going to be okay. Yes, executive orders can be taken away, but these things take time. And the president cannot change the fundamentals of our current immigration law, such as the way family petitions work, on his own. That has to go through Congress.

2) Prepare yourself. Educate yourself about your rights. Know what to do if you come in contact with an I.C.E. agent or are taken in a raid. Have a family safety plan. It is all very scary stuff, but the best thing you can do is be prepared.

3) Consult with a local immigration attorney. If there are forms of relief that are available to you or you are eligible for citizenship (you can check your eligibility here), now might be the time to apply.

4) Become civically engaged. Just because you are undocumented does not mean you cannot take steps to protect your community in a peaceful, productive way. And you have the right to do so.

Other suggestions from immigration advocates:

1) Make sure any legal professional you consult with is known and trusted in your community. Beware of frauds.

2) If you have not already filed an application for Deferred Action for Childhood Arrivals protections, do not do so now. If the process is discontinued you will lose your money; also, it’s unclear how the incoming government might use that information.

3) If you have approval to travel, make sure you are back in the United States by Inauguration Day, Jan. 20th, 2017.

4) If detained, do not sign anything and demand to see a judge. If you have not had a prior removal order, you have the right to go before an immigration judge.

5) Do not open your doors to strangers unless the person has a signed order from a judge with your name on it. Make sure your children know the same.

@PopCulturPriest
Show Comments (
6
)
Comments are automatically closed two weeks after an article's initial publication. See our comments policy for more.
ed gleason
5 years 10 months ago
Jim D SJ gave good advice, here are some other questions> How many parishes will give sanctuary ? When LA And SF lose Fed funds who will and how will we stand up? Will there be raids at work places and those w/o ids be bused somewhere? Will the blocking of the buses involve Catholic parishioners? Are they being organised now or are we waiting for Bannon/Sessions to strike first.?
Lisa Weber
5 years 10 months ago
Thank you for providing good information for dealing with a difficult situation. It gives me hope just to read about how people are preparing to resist the incoming administration's efforts to divide us with hate. I have never participated in a demonstration or a march, but I expect to now.
JR Cosgrove
5 years 10 months ago
There is a thorny issue here. The cities are harboring criminals, certainly not all the illegal immigrants, but a sizable number of them. Do cities want to stand on the principle of harboring criminals? What about criminals who are citizens? Will they be treated differently? Chicago is one of the most lawless places in the country and much of the illegal gun trafficking is run by Latin American gangs promoting drug usage. Does Chicago really want to protect these people? Especially when it is people of color who are bearing the brunt of these crimes. Is Rahm Emmanuel a racist because of this? See http://amzn.to/2eNVvZC
Egberto Bermudez
5 years 10 months ago
Good article, very informative and full of practical advice. The headline is excellent “Los Angeles Circles the Wagons.” It catches the reader’s attention and helps him/her connect with the content of the article. My reaction was, it is about time, Los Angeles should have circled the wagons long time ago because 2 million people have been deported in the last 8 years and “nada and nada and nada” happened.
L J
5 years 10 months ago
Better question is: will individuals help these Latinos with financial needs, finding attorneys and helping them secure legal passage, or will they turn their backs and expect others to do it? The Vatican has adopted several migrant families. I dont know a single American family or individual who has adopted a Latino refugee seeking permanent residence in America. Ni uno.
Chuck Kotlarz
5 years 10 months ago
ABC notes hundreds of orphans came to the US after the Haiti earthquake. Haiti is considered part of Latin America. http://abcnews.go.com/GMA/HaitiEarthquake/haitis-orphans-adjusting-life-america/story?id=9696075