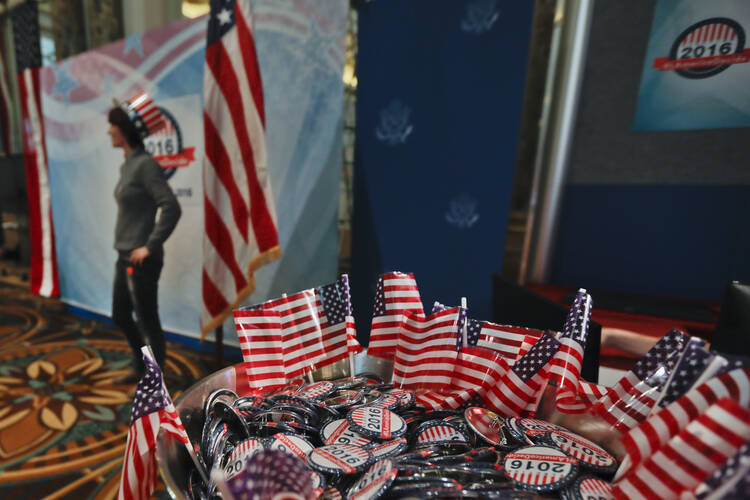 Pins reading "The America Decide" are displayed during a reception organized by the U.S. Embassy to wait for the results of the 2016 U.S. Presidential election, in Rome, Tuesday, Nov. 8, 2016. (AP Photo/Gregorio Borgia)

“I congratulate Mr. Trump and everyone elected yesterday,” Louisville Archbishop Joseph Kurtz, president of the U.S. Conference of Catholic Bishops, said in a statement released on Wednesday morning.

“Now is the moment to move toward the responsibility of governing for the common good of all citizens,” he continued. “Let us not see each other in the divisive light of Democrat or Republican or any other political party, but rather, let us see the face of Christ in our neighbors, especially the suffering or those with whom we may disagree.”

“Congratulations to President-elect Donald Trump,” Cardinal Sean O’Malley of Boston tweeted. “May God grant you good health, wisdom and courage during your presidency.”

Congratulations to President-elect Donald Trump. May God grant you good health, wisdom and courage during your presidency.

Cardinal-designate Joseph Tobin, who will soon become the archbishop of Newark, invoked Scripture, tweeting, “Paul invites us to pray ‘for kings and for all in authority, that we may lead a quiet and tranquil life in all devotion and dignity.’”

Paul invites us to pray "for kings and for all in authority, that we may lead a quiet and tranquil life in all devotion and dignity."

In Rome, the Vatican’s secretary of state, Cardinal Pietro Parolin, offered congratulations to Mr. Trump, telling reporters: “We send good wishes to the new president that his governance may be truly fruitful. And we assure him also of our prayer, that the Lord may enlighten and sustain him in the service of his fatherland, of course, but also in the service of well-being and peace in the world.”

How a Trump administration will relate to the Vatican remains a mystery.

Mr. Trump and Pope Francis clashed earlier this year over immigration, and the pope gave a speech in Rome last Saturday in which he denounced the building of walls. Mr. Trump has promised to build a wall along the United States’ southern border with Mexico.

Mr. Trump’s personal history and crude comments about women and sex led some Catholic and evangelical leaders to denounce him in the months leading up to the election. Many urged their fellow believers not to support the Republican nominee. Their efforts appear to have been futile.

The path to victory for the real-estate mogul and reality television star was propelled in part by enthusiasm from white Catholic voters. In Elk County, Pa., for example, which is about 70 percent Catholics, Mr. Trump won 70 percent of the vote compared to 57 percent for Mitt Romney in 2012.

Mrs. Clinton picked a Catholic running mate, Sen. Tim Kaine, but her campaign was dogged by accusations of anti-Catholic sentiment following leaked emails that had been sent to her campaign chairman. Archbishop Kurtz did not comment frequently on the election in his role as president of the U.S.C.C.B., but he did release a statement expressing concern about the emails last month, which was published in some parish bulletins last Sunday.

The Trump campaign promised that he would appoint pro-life Supreme Court justices, and he made a concerted effort to court Catholic voters, through the appointment of a Catholic advisory council, a letter writing campaign to Catholic leaders and a high-profile appearance on Catholic media in the days leading up to the election.

Voters in some states also weighed in on issues important to Catholic leaders, including physician assisted suicide, capital punishment, minimum wage laws and legalized marijuana. In Nebraska, despite intense lobbying from the Catholic Church, voters decided to bring back the death penalty while voters in California decided to keep the death penalty and speed up executions.

The California Catholic Conference lamented the results as well. “In this Extraordinary Jubilee Year of Mercy, it would have been the fitting culmination of a year-long calling to live out the Works of Mercy,” it said in a statement.

Meanwhile, voters in Colorado voted to legalize physician-assisted suicide and to block a proposal to bring universal health care to that state. The Colorado Catholic Conference was against both ballot initiatives.

In Arizona and Colorado voters approved measures to raise the minimum wage to $12 per hour.

In Massachusetts, the Catholic Church and the Knights of Columbus spent one million dollars to defeat a ballot referendum legalizing recreational marijuana. But voters there approved the measure, as did voters in California, Maine and Nevada. In a statement, the Archdiocese of Boston expressed its disappointment in the results of the referendum but said it was encouraged that parishes as well as ecumenical interfaith groups “gave significant time and support for the effort to defeat this harmful legislation.”

“Anticipating significantly increased demands on many of the Archdiocese’s social service and assistance programs, due to the documented effects of widespread marijuana use, we will continue to as best possible provide for the needs of the people we serve,” the statement continued.

For his part, while not mentioning the U.S. election, Pope Francis tweeted Tuesday, “May we make God’s merciful love ever more evident in our world through dialogue, mutual acceptance and fraternal cooperation.”

May we make God’s merciful love ever more evident in our world through dialogue, mutual acceptance and fraternal cooperation.

Michael O’Loughlin is the national correspondent for America and author of The Tweetable Pope: A Spiritual Revolution in 140 Characters