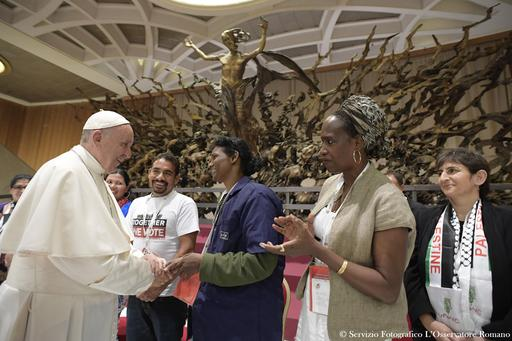 Pope Francis salutes at the end of an audience with representatives of the popular movements at the Vatican Saturday, Nov. 5, 2016. (L'Osservatore Romano/Pool Photo via AP)

In a powerful, one might say even revolutionary talk to participants at the third World Meeting of Popular Movements, Pope Francis denounced “the basic terrorism that derives from the global control of money on earth, threatens the entire humanity and gives rise to other terrorisms.” It also gives rise to fear, the building of walls and other forms of exclusion, including of migrants, he stated.

Speaking to some 200 representatives of 92 grass-root movements from all five continents and over 60 countries, as well as to 3,000 Italians from similar movements who had gathered in the Vatican’s Paul VI audience hall for to hear him, Francis said he shares with them “the thirst for justice.”

He called on them to work “to revitalize, to re-found the democracies that are going through a crisis.” This is necessary, he said, because of “the gap between the peoples and present-day forms of democracies is widening ever-more due to the enormous power of economic and mediatic groups that seem to dominate.” Indeed, he added, these democracies risk no longer being representative of the people.

He praised the way these movements are pushing for change in different ways at the local and global levels, working “to put the human person not money at the center of the economy.” But he reminded them that their efforts are threatened by powerful forces because money rules with “the whip of fear, of inequality, of economic, social, cultural and military violence that generates ever more violence in a downward spiral.”

He counseled these participants and their movements—which work to ensure people have “labor, lodgings and land” and to protect creation—to be on their guard against allowing themselves to be co-opted, reduced to secondary actors or corrupted in this process as they seek to change the political and economic situation in the world. He encouraged them to get deeply involved in working politically to change the present system that advocates consumption and creates the throwaway culture and increasing social exclusion

He encouraged them to combat fear and terror with love—like Martin Luther King—and to do so with “a spirit of solidarity” as well as a “strong sense of austerity and humility,” seeking to “build bridges.” He emphasized the importance of example in working for social, political and economic change and promoting the common good.

He hailed the popular movements as “sowers of change” and “promoters of a process” that link together “millions of small and great actions” that create “a human alternative in the face of the globalization of indifference.” They do so, he said, by working for three things: an economy that serves peoples; justice and peace; and the protection of mother earth.

Francis reminded them that solutions to the major problems of the world do not come from “one, three or a thousand conferences” but from a collective discernment in the different places where they live that becomes “a transforming action.”

He denounced yet again “the globalizing ideological colonialism” that seeks to impose solutions that “do not respect the identity of the peoples” or their cultures.

He called on the popular movements to work “at the local and universal” levels and praised them for looking beyond the problems and creatively seeking solutions that give dignity to people, also through creating work. “I accompany you,” he assured them.

Francis told them that all the social teaching of the church and the magisterium of his predecessors “rebels against the idol that is money, which rules instead of serves, tyrannizes and terrorizes humanity.”

But he said, “no tyranny sustains itself without exploiting our fears,” and thus “every tyranny is terroristic.” Moreover, when this terror “which is sown in the peripheries by massacres, looting, oppression and injustice, and explodes in the center with different forms of violence, even with hateful and vile attacks, those citizens that still retain some rights are tempted by the false security of physical or social walls,” which “close in some and exclude others.”

Fear “is fed and manipulated,” Francis stated. It gives good dividends to “the merchants of arms and of death,” but “it weakens us, it destroys our psychological and spiritual defenses, it anesthetizes us against the suffering of others and makes us cruel.”

He urged those who have such fear to pray for courage and said “mercy is the best antidote against fear” and “is much more effective than walls, that barbed wire fences, than alarms and arms, and it is free. It is the gift of God.”

He called on the members of these movements worldwide “to build bridges between peoples, bridges that allow us to knock down the walls of exclusion and exploitation.”

He praised the popular movements for the countless different initiatives—such as cooperatives, recycling, restoring failed factories and so on—by which they succeed in overcoming “the atrophy of the socio-economic system that is unemployment” and help provide labor, housing and land for people.

In the much-applauded 55-minute speech, he told them, “we must help to heal the world of its moral atrophy,” which provides “some cosmetic prostheses that are not real development,” such as “economic growth, technological progress, greater efficiency to produce things that we can buy, use and throw away in a vertiginous throwaway dynamic” that does not contribute to the integral development of persons or of peoples or respect the created world.

The colorful, multi-ethnic assembly, which included people of all faiths and none, had devoted an entire day of its third world meeting to “the drama of migrants, refugees and displaced people.” Francis described this as a scandal produced by “an unjust socio-economic system and wars” that these people have not created.

Francis highlighted the fact that when a bank risks bankruptcy scandalous sums of money are quickly found to bail it out but only a tiny fraction of assistance is given to this “bankruptcy of humanity.” He recalled the dramatic scenes he had seen in Lampedusa and Lesbos and how the Mediterranean had become a cemetery that is “close to walls, walls smeared with blood.” He denounced “the fear that hardens the heart and transforms it into blind cruelty that refused to see the blood, the pain and the face of the other.”

He concluded by praying that God “fill you with his love and defend you on the path, providing sufficient strength to sustain you, and give you the courage to break the chain of hatred; that strength is hope.”

This was the third world meeting of popular movements that Francis has addressed, and his presence has been crucial to their coming together. It was the second one to be held at the Vatican. The first was held here in 2014 and was convened at his request by the Pontifical Council for Justice and Peace. The second one was held in Santa Cruz, Bolivia, in July 2015, during his visit to the country. He was given rapturous applause at all three when he finished speaking.

(Note: All translations here are by the author in the absence of an official one)