What I learned in prison from 'convict college' 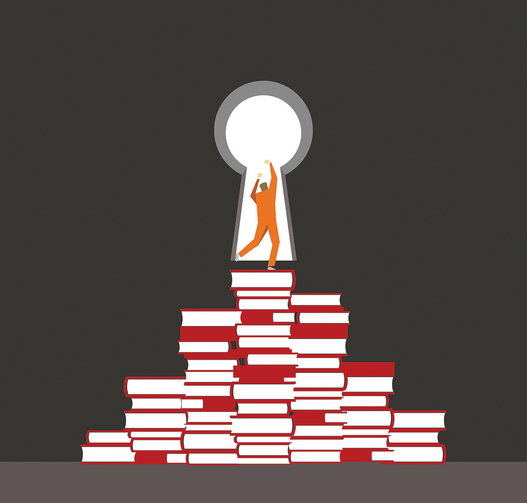 In 1992 I was a 17-year-old college student studying at Phoenix College. Two years later I began a different sort of education, this time at “convict college.” I was serving a sentence for possession of drug paraphernalia, which turned out to be only an introduction to many years—and advanced degrees—of criminal behavior.

That same year, in an attempt to boost voter approval and cut government spending, President Clinton signed the Violent Crime Control and Law Enforcement Act of 1994, which bans prisoners from receiving federal educational funding assistance, like Pell grants. Since that time, the number of inmates able to earn a college degree has dropped dramatically. Prisons across the country have cut back on “costly” education in favor of supposedly “cost-effective” programming—mostly idle time, spent in cells—and are quickly becoming nothing more than human warehouses. The prevailing public sentiment seems to be: “Who cares? Prisoners don’t deserve such a privilege.”

Criminal behavior is a breach of the victim’s and society’s trust, rights and safety; and for many people, especially victims and their families, exacting retribution feels right. But when we consider the fact that the majority of prisoners will someday be released back into society, it is clear that mere vengeance can be self-defeating. If society wants to reduce the number of people victimized by crime, reason dictates that an inmate’s time in prison should be used to correct the antisocial behaviors that put him or her there in the first place. Only by lowering recidivism rates will our criminal-justice system protect citizens and lessen the fiscal burden incarceration imposes upon taxpayers.

A three-state study of recidivism conducted by the Correctional Education Association found that two years’ worth of correctional education reduced recidivism rates by an average of 12 percent. A meta-analysis of studies on the effect of post-secondary correctional education published by Cathryn Chappell in the Journal of Correction Education in 2004 found that recidivism rates were on average 46 percent lower for inmates who took college classes than for offenders who did not.

But is this simply “rewarding” prisoners for their past misdeeds, or are there benefits for potential victims and taxpayers as well? A study conducted by the University of California, Los Angeles, School of Public Policy and Social Research in 2004 found that when it comes to discouraging repeat offenders, correctional education is nearly twice as cost-effective as imposing longer sentences. Each year approximately 700,000 prisoners are released, of whom roughly two-thirds will reoffend within three years. That is 476,000 people the state will have to re-incarcerate, at an average cost of about $31,300 per inmate per year. And because the average offender commits 8.89 crimes per year, that is potentially millions of additional victims.

Reducing the recidivism rate by even 12 percent through education could save taxpayers billions annually and prevent the victimization of hundreds of thousands of people. This does not even begin to factor in the multitude of societal benefits, like the reduction of insurance premiums due to decreased crime rates, the collection of taxes paid by working ex-offenders or the benefits to children and spouses of rehabilitated ex-offenders, who are less likely to be on welfare or to fall into generational criminality.

Today many prisoners are corralled into cellblocks, where there are few opportunities for personal growth. Even more devastating is the fact that many young prisoners are immersed in a group of hardened “veteran” criminals, who only further corrupt and warp these young minds. When I first went to prison in 1994, I was introduced to the prison’s pervasive drug and gang culture, and my criminal tendencies quickly multiplied. By 1996 I had participated in my first stabbing, and by 2005 I committed attempted murder. How had my life become so meaningless and destructive in such a short time? Much of it had to do with being isolated from positive societal influences, severed from my family and surrounded by a destructive criminal culture.

Jesus stated, “A good tree does not bear rotten fruit, nor does a rotten tree bear good fruit. For every tree is known by its fruit” (Lk 6:43). The recidivism rate in the United States has remained virtually unchanged over the past 30 years. Clearly, the current correctional system is producing rotten fruit.

Nurturing a rotten tree will not produce good fruit. Demanding education and rehabilitative programs within the U.S. prison system is the only way to uproot the rotten tree that currently stands. A little more than five years ago, Jesus planted a “good tree” within me. I am now drug-free, gang-free and Catholic. I am a college student and am nearly halfway to earning my bachelor’s degree in sociology, with an emphasis on criminology. In addition, I have founded a peer-based rehabilitation program called Inmate-Driven Rehabilitation Service, which seeks to provide prisoners with the rehabilitative resources and educational opportunities that the prisons fail to provide.

None of this personal growth, however, can be attributed to the state prison system. My college tuition has come from a fund set up by the Catholic Peoples Foundation, a nonprofit organization based in Gallup, N.M. Without their support I do not know where I would be now. In fact, my positive efforts, and those of my Catholic mentors, are regularly thwarted by the prison’s staff, its policies and its general attitude of indifference. The Arizona Department of Corrections has policies in place that actually prohibit a large portion of its prisoners, including those in special housing units, from seeking a college education. These practices have devastating consequences. Most inmates give up all hope of achieving a better life outside of prison because it appears unattainable.

One of the best ways to give prisoners hope is to immerse them in work, education, charity and other programs that prepare them to enter the workforce and to support their families and communities. Removing all forms of rehabilitative tools, while simultaneously isolating prisoners from positive forms of socialization, is not only ineffective; it is a costly mistake, one that guarantees that U.S. prisons will remain full and that victims of crime (not to mention taxpayers) will continue to pay the human and financial toll.

Approximately seven million prisoners are released back into society each decade, to either reintegrate and become productive members of their community or to offend again. Recidivism rates remain unchanged decade after decade in spite of “tough on crime” laws. The root cause is that prisoners leave prison the same as when they entered or worse off. It is time for taxpayers to insist that their money be put toward cost-effective, quality services through performance-based funding. Prisons that act as human warehouses and criminal “finishing” schools rather than as correctional facilities are rotten trees. It is time to plant some new seeds in the U.S. criminal justice system.

Donald Lee, an inmate with the Arizona Department of Corrections, is pursuing a bachelor’s degree in sociology.

Show Comments (
1
)
Comments are automatically closed two weeks after an article's initial publication. See our comments policy for more.
Lisa Weber
4 years 9 months ago
Thank you for this article! It's very informative.