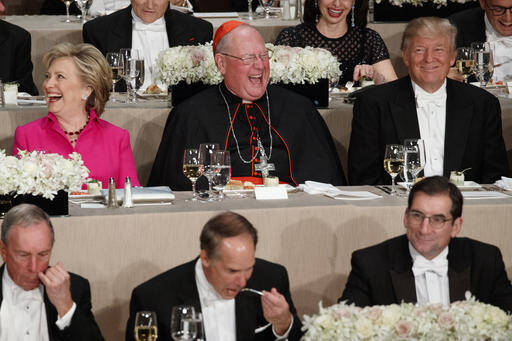 What a difference a day makes.

Less than 24 hours after hurling insults during the final presidential debate, Donald Trump and Hillary Clinton were back on stage together at the 71st Annual Alfred E. Smith Memorial Foundation Dinner on Thursday, this time trying their best to inject some humor into the final stretch of a particularly rancorous campaign.

While there was some tension in the room, including some jeers from the crowd aimed at Mr. Trump, the evening was more light hearted than other encounters between the two candidates.

Mr. Trump spoke first, drawing big laughs with a joke about his wife’s speech at the Republican National Convention, parts of which were plagiarized from first lady Michelle Obama.

“The media is even more biased this year than ever before,” Mr. Trump said. He said the media praised several speeches given by Mrs. Obama.

But, he continued with a straight face, “my wife Melania gives the exact same speech, and people get on her case, and I don’t get it. I don’t know why.”

When it was Mrs. Clinton’s turn, she joked about the high fees she received for speeches, hacked emails leaked by WikiLeaks and comments she made at a fundraiser characterizing half of Mr. Trump’s supporters as “a basket of deplorables.”

“There are a lot of friendly faces here in this room,” she said, “people I’ve been privileged to know and to work with. I just want to put you all in a basket of adorables.”

Cardinal Timothy Dolan, the dinner’s host, was flanked on the dais inside the Waldorf-Astoria ballroom by Mrs. Clinton and Mr. Trump, the trio joined by dozens of political, media, philanthropic, financial and church leaders. Melania Trump sat next to her husband but former President Bill Clinton did not attend.

The New York cardinal has been critical of both candidates over the course of the campaign—accusing Mr. Trump of promoting nativism and challenging Mrs. Clinton’s support of abortion rights—but he smiled through the tension present in the room on Thursday night.

After a stage cough, the cardinal said he was afraid he was coming down with a cold, “which is completely understandable given the fact that for the last two hours I’ve had a seat between our two candidates—which is probably the iciest place on the planet.”

“Where is global warming when you need it?” he joked.

Both candidates traded barbs, but the crowd booed Mr. Trump a handful of times after his comments sounded less like jokes than political attacks on his opponent.

The candidates were Cardinal Dolan’s guests at the white-tie fundraiser, which benefits various Catholic charities in New York. It is named after Mr. Smith, the former governor of New York who ran unsuccessfully for the presidency in 1928 as the first Catholic to be nominated by a major party. The event has become a political fixture since John F. Kennedy and Richard M. Nixon attended in 1960.

Al Smith IV set the tone for the evening with a string of jokes aimed at both candidates. He said, for example, that even in the midst of a bruising election the pair were getting along well, with Mr. Trump asking how Mrs. Clinton was feeling before dinner. “She said, ‘I'm fine,’” Mr. Smith deadpanned, “now get out of the ladies’ dressing room.”

The evening wasn’t all jokes. Mr. Trump recalled coming to the dinner with his father as a child and touched on issues important to his Catholic supporters, such as “the need to stand up to anti-Catholic bias, to defend religious liberty and to create a culture that celebrates life.”

For her part, Mrs. Clinton highlighted the anti-Catholic sentiment facing Mr. Smith during his presidential run. “Those appeals, appeals to fear and division, can cause us to treat each other as the other. Rhetoric like that makes it harder for us to see each other, to respect each other, to listen to each other, and certainly a lot harder to love our neighbor as ourself.”

She also talked about the similarities between Catholicism and her Methodist faith, said she was inspired by Pope Francis and thanked her running mate, Sen. Tim Kaine, for introducing her to the Jesuit concept of “magis,” roughly translated as “the greater, the better, the more for God."

“Well we need to get better at finding ways to disagree on matters of policy while agreeing on questions of decency and civility, how we talk to each other, treat each other, respect each other,” Mrs. Clinton said. “So I’ve taken this concept of magis to heart in this campaign as best as one can in the daily heat, the back and forth of a presidential campaign, to ask how we can do more for each other and better for each other.”

Given the concerns Cardinal Dolan and other Catholic bishops have expressed about the candidates, it was not a certainty that they would be invited to the dinner—and it wouldn’t have been the first time.

Cardinal Dolan faced criticism from some Catholics for his decision to host President Barack Obama, along with his challenger Gov. Mitt Romney, in 2012.

This year, Catholics on both sides of the aisle expressed disappointment before the dinner for Cardinal Dolan’s decision to host Mrs. Clinton, who supports abortion rights, and Mr. Trump, who proposes building a wall along the U.S.-Mexico border and banning Muslim migrants from entering the United States.

Mrs. Clinton acknowledged the controversy about the invitations, highlighting the cardinal’s response. He said that if he only ate with saints, he would take most of his meals alone.

“I think the cardinal is saying I’m not eligible for sainthood,” she said. “But getting through these three debates with Donald has to count as a miracle.”

Recent polls show Catholics breaking for Clinton, driven by an overwhelming preference among Hispanic Catholics for the former secretary of state, though both campaigns have had hiccups in their appeals to Catholic voters.

The Clinton campaign faced accusations of anti-Catholicism earlier this month after hacked emails revealed a member of her senior staff ridiculing Catholic conservatives.

Meanwhile, Mr. Trump, who met privately with Cardinal Dolan last week in New York, has been critical of two popes. He clashed with Pope Francis in February over immigration issues and in 2013 he said in a radio interview that Pope Benedict should “give up and die” and then criticized the pope for resigning.

Thursday’s dinner drew about 1,500 guests, with tickets starting at $3,000. All proceeds benefit services for children that the Alfred E. Smith Memorial Foundation supports. The event’s board of directors paid for the costs of the dinner. The foundation raised nearly $6 million in 2016, the organization said.

@MikeOLoughlin
Show Comments (
7
)
Comments are automatically closed two weeks after an article's initial publication. See our comments policy for more.
ed gleason
5 years 11 months ago
Bad jokes and boos will never threaten Saturday Nite Live . All late night comedy jobs are safe.. Thank you, Jesus, we won't see this over priced dinner again for 4 years if ever.
Tim O'Leary
5 years 11 months ago
The Al Smith dinner is an annual event.
ed gleason
5 years 11 months ago
Poor Donald has no clue about self-depreciating humor . Instead of using one of his own 100 strange quirks his writers got their best laugh throwing his wife under the bus [Michelle's speech copy]' Henny Youngman invented :"take my wife please' so his writers are not original either..
Carlos Orozco
5 years 11 months ago
A bad joke is often that because, without much humor, it just tells the hard, brutal truth. When getting called out in such a situation, maybe the only thing that is left is to boo.
Lisa Weber
5 years 11 months ago
The candidates are better-behaved when a cardinal sits between them - not surprising.
Carlos Orozco
5 years 11 months ago
Meanwhile, political and military agents of the New World Order are hard at work to start WWIII, calculating that out of the ashes of such a nightmare the people of the world will desperately embrace a tyrannical, anti-Christian world government than brings "peace", but enslaves the souls. "Christ Reigns, Christ Rules, Christ Conquers; Eternal Master, Eternal King, Eternal Conqueror. His Power is an everlasting power that shall not be taken away". - Sanctuary of the Basilica of the National Shrine of the Immaculate Conception
Bill Mazzella
5 years 11 months ago
I must say I am proud of Cardinal Dolan for remaining bipartisan during the dinner and staying in the charitable framework and inclusiveness this dinner represents. He refused to get into the cultural or political world and was a charitable presence and beacon of light in the midst of this ugly campaign.