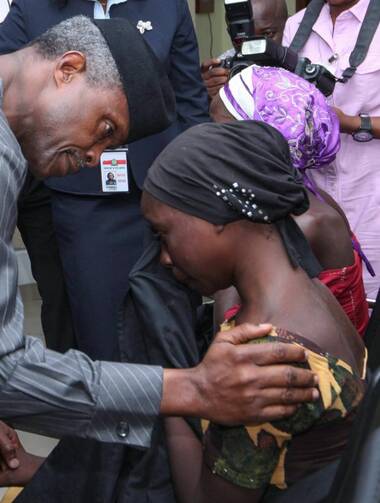 Three Catholic leaders welcomed the release of some of the girls kidnapped in 2014 from a school in Chibok and urged the Nigerian government to prioritize the release of the remaining girls.

Cardinal Anthony Olubunmi Okogie, retired archbishop of Lagos, said he had mixed feelings when he heard the news of the release of 21 of the girls kidnapped by Boko Haram, because he felt like they should have been released before now. Two-hundred-seventy-six girls were kidnapped from the Government Secondary School in Chibok April 14, 2014; 57 escaped the same day and one two years later.

Their Oct. 13 release of the 21 girls was part of a deal brokered by the International Committee of the Red Cross and the Swiss and Nigerian governments.

"Yes, it is cheering news to the parents that they would be reunited with their abducted daughters after a long while," he told Catholic News Service. "But to me, the girls must have been brainwashed and abused by their abductors during the period and some forcefully married against their wishes."

Cardinal Okogie blamed the past administration for not sanctioning the governor of the state under whose watch the incident happened then. He also said the nation's school system was becoming a laughingstock following kidnappings that occurred recently in two different schools in Lagos state.

Bishop Matthew Ishaya Audu of Lafia told CNS that he was happy the girls were still alive.

"We pray that the remaining ones will be released very soon," he said.

The bishop urged the government to arrange for counselors and psychologists so the young women could be fully integrated into society. He noted that they must have been abused by their kidnappers and thus would feel a stigma.

"Also, the government must keep their identities very secret from the larger society so that they will get good husbands to marry them later in life," he said.

Bishop Felix Femi Ajakaye of Ekiti said Nigerians should thank God for the girls' release and echoed calls for the government to help rehabilitate them.

"Nigerians must come together to fight evil and savagery in our country," he added.

Leaders of the #BringBackOurGirls campaign said they would continue to work until all the girls were released or rescued.