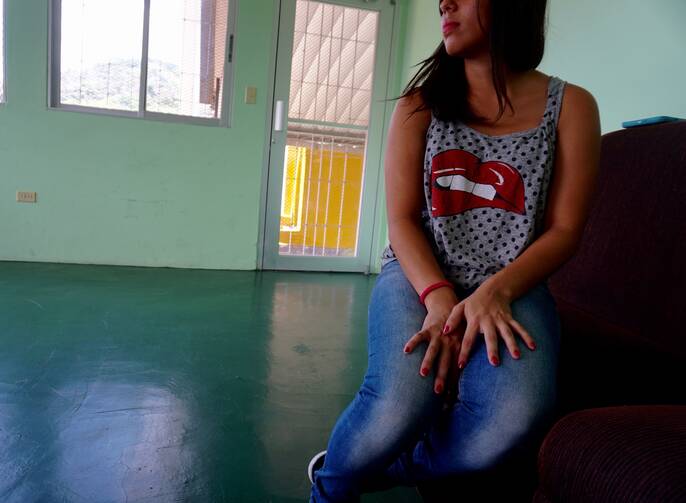 Lorena (not her real name) has lived at Casa Alianza for three year. A photo of her face cannot be published for security reasons.

Lorena was 12 years old when her mother went to Spain in search of work. A week later, a friend offered her cocaine for the first time. She took it.

She was angry and distraught over her mom’s decision to migrate, and when she used cocaine and marijuana, she forgot about her mom and everything else. Over the next year, drugs hurt her school work and alienated her from her family; her sisters and uncles criticized her addiction and tried to make her stop. But it was not until her mom said she was going to return from Spain to help her recover that Lorena stopped using. As much as she wanted to see her mom again, she understood that she and her siblings depended on the money their mom was sending back from her work as a home aide in Madrid. (Her dad abandoned the family when she was 7, and she does not know where he is, an all too common situation in this region.)

Today, Lorena, her twin brother and older sister live at Casa Alianza (Covenant House), a refuge for homeless and at-risk teens in downtown Tegucigalpa. For 29 years, la Casa has offered protection, psychosocial counseling, education and development opportunities to kids who have nowhere else to go. Many, like Lorena, have a history of drug use; others have been involved in gangs or are abused at home and are looking for a safe way out. Oscar, a baby-faced 12-year-old I met over lunch, was abandoned by his mother when he was two. She left him and his brothers with an unrelated man in Guatemala, who, Oscar says, took him in but sent away the older ones because “he didn’t like them.” Oscar did not describe what he experienced there, but it is hard not to draw the worst conclusions. He eventually left to find his grandmother, ended up in a shelter in Mexico and was deported back to Honduras just two weeks ago.

Words and statistics do not do justice to the forces working against these kids. In the United States, we hear a lot about the violence of Central America’s Northern Triangle—gangs, drug traffickers, rogue police forces. But ask most Hondurans what the biggest obstacle young people here face and they do not have to think twice: a lack of opportunity. A quarter of children suffer from chronic malnutrition; 75 percent live in poverty. Unemployment figures are difficult to pin down because most people are self-employed or work in the informal sector; but it is estimated to be between 30 and 50 percent—and even higher for those under 30, who make up half the population.

This is not to say people do not see and experience violence. While the homicide rate has gone down from its peak of 90 per 100,000 in 2012, it remains one of the most dangerous countries in the world outside a war zone with a murder rate of 61 per 100,000. (For comparison, that number is below five per 100,000 in the United States.) Lorena told me that three of the friends she used to do drugs with have been murdered since she stopped hanging out with them. Padre Alexis Zuniga, who we met in one of las colonias—impoverished neighborhoods that climb up the mountains surrounding the city—said there have been 30 murders in the past two months in just the two parishes he covers.

It used to be that gangs just fought with each other for turf; now, to secure trafficking routes, they seek to control entire neighborhoods, from the bus driver to the police officer. They collect “rents” on small businesses and take out those who refuse to comply. Homicides are rarely investigated and almost never solved. We met a woman whose 19-year-old cousin had started a new job two weeks ago selling cell phones. On his first day, he set off on a motorcycle and never came back. His body was found three days later, his arms and legs cut off. She says the police assume he was in a gang, but his family knows he was a good boy. There will be no investigation, no justice. His mother now wants to leave the country.

So, yes, there is horrific, daily violence. And a single murder, if it happens to your cousin, your uncle, your son, is enough to compel an entire family to flee north. But according to government statistics, 80 percent of the roughly 5,300 Hondurans detained in Mexico in the first half of this year say they migrated for economic reasons; only 11 percent cite violence. It is impossible to know how accurate these numbers are; some tell authorities they fear for their lives in order to gain asylum, while others are afraid to report violence for fear of retaliation. But one gets the feeling that insecurity is something people here have no choice but to compartmentalize and manage: avoid this neighborhood, roll up your windows, pay off the right people. We all know you can die in a car crash at any moment; we still drive. But the everyday injustice of poverty and corruption—that is something they cannot ignore and cannot escape.

When I ask Lorena what she hopes for her future, she says she wants to be a lawyer. “There is a lot of injustice, a lot of inequality,” she says. “We all have rights, but people take them away.”

And Lorena is one of the lucky ones. She has not seen her mom, except in pictures, since she left. But she is still able to attend high school—a luxury many in this country cannot afford—and her economic situation is less precarious than many of the kids living at la Casa. I ask her if the trade-off is worth it: having more money but missing her mom. She thinks for a moment and then shakes her head: “No. No, it’s not worth the pain.”

Ashley McKinless, an associate editor of America, was awarded the 2016 Egan Journalism Fellowship by Catholic Relief Services. She traveled to Guatemala and Honduras with C.R.S. from Oct. 3 to 14.

@AshleyMcKinlessmckinless@americamedia.org
Show Comments (
1
)
Comments are automatically closed two weeks after an article's initial publication. See our comments policy for more.
William Rydberg
5 years 7 months ago
Covenant House is one of many avenues of Jesus' grace flowing from the Catholic Church... Pray for all people that donate and work there... Deo gratias, Vivat Jesus!