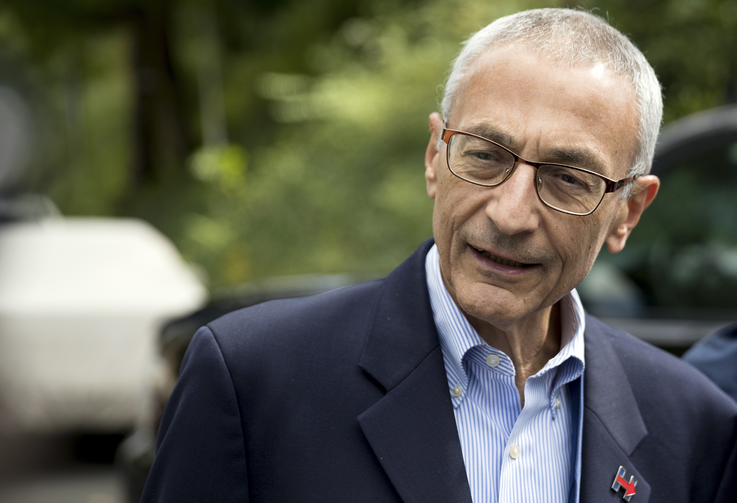 Hoping to improve its standing with Catholic voters, the Trump campaign on Oct. 12 demanded an apology from the Clinton campaign for a string of leaked emails that critics say show an anti-Catholic bias from some of Hillary Clinton’s top aides.

In a 2011 email chain made public on Tuesday, Clinton communications chief Jennifer Palmieri responded to an email from John Halpin, a staffer at the Center for American Progress, about conservatives who convert to Catholicism, highlighting Fox News owner Rupert Murdoch whose children were raised Catholic. Mr. Murdoch himself is not Catholic, but he has been active in Catholic circles.

Mr. Halpin wrote that conservatives are attracted to Catholicism because of “the systematic thought and severely backwards gender relations” calling such beliefs “an amazing bastardization of the faith.”

Ms. Palmieri, who also worked at the Center for American Progress at the time, responded, “I imagine they think it is the most socially acceptable politically conservative religion. Their rich friends wouldn't understand if they became evangelicals.”

Speaking to reporters on Wednesday, Ms. Palmieri said that she does not “recognize” the emails and that she herself is Catholic, according to a tweet from a BuzzFeed political reporter. She reportedly stopped short of denying their authenticity.

It does not appear that Mr. Podesta replied to the Palmieri-Halpin thread, but the Trump campaign highlighted the emails on Wednesday. Speaking at Liberty University on Wednesday morning, G.O.P. vice presidential hopeful Mike Pence condemned the emails and called on the Clinton campaign to apologize.

“If only on behalf of her Catholic running mate,” Mr. Pence said, referring to Tim Kaine, “Hillary Clinton should denounce those bigoted, anti-Catholic, anti-evangelical remarks and her campaign staff should apologize to people of faith and do it now.”

In the same speech, Mr. Pence, who was brought up Catholic before converting to evangelical Christianity in college, said he “didn’t see much relevance for the faith that I’d been raised in.”

Mr. Trump weighed in on the leaked emails later in the day during a speech in Florida.

A poll from PRRI released on Tuesday found Mrs. Clinton leading Mr. Trump 55 percent to 34 percent among all Catholic voters. The Republican candidate does better with white Catholics, trailing just four points behind Mrs. Clinton. The poll was conducted on Oct. 5-9.

“Make no mistake, had Clinton staff and allies spoken this way about other groups, they would be dismissed,” the group said in a statement. “Just imagine if Clinton’s spokesperson was caught calling prominent Muslims or Jewish converts frauds for embracing their faith and mocking them for doing so because it was socially acceptable.”

The head of the group, Brian Burch, faulted Mr. Podesta for not replying to the email.

“And there's no evidence that Clinton campaign chairman John Podesta ever pushed back at these smears against Catholicism,” he said in a statement. “Everyone has a unique faith journey, and it's just insulting to make blanket statements maligning people's motives for converting to another faith tradition.”

Other Catholics are accusing Mr. Podesta of trying to foment division in the church, pointing to a separate email exchange about opposition from some bishops to certain elements of the Affordable Care Act based on the church’s stance against contraception.

In a 2012 email to Mr. Podesta, Sandy Newman, president of Voices for Progress, wrote that while he does not understand how the Catholic Church operates, he wanted somebody to launch a “Catholic Spring, in which Catholics themselves demand the end of a middle ages dictatorship and the beginning of a little democracy and respect for gender equality in the Catholic church.”

Mr. Podesta responded by highlighting two organizations he helped create that could fill such a role.

“We created Catholics in Alliance for the Common Good to organize for a moment like this,” he wrote. “Likewise Catholics United.”

Thomas Peters, a conservative writer and member of CatholicVote, wrote that the emails show a concerted effort by Clinton allies to undermine the Catholic Church.

He followed that tweet with, “@johnpodesta emails are especially alarming because they show the tip of an iceberg. They created a network. This is just a snapshot.”

Christopher Hale, the executive director of Catholics in Alliance for the Common Good, told America that his organization is fully on board with U.S. bishops and the teachings of the Catholic Church.

“We’re not a church reform group,” he said. “What we’re trying to do is to promote the settled issues of the church in the public sphere, like the dignity of all human life from conception to death, the dignity of immigrants, economic justice for the poor, care for God’s creation, and inclusion for marginalized communities throughout the nation.”

Michael O’Loughlinis the national correspondent for America and author of “The Tweetable Pope: A Spiritual Revolution in 140 Characters.” Follow him on Twitter at @mikeoloughlin.

@MikeOLoughlin
Show Comments (
23
)
Comments are automatically closed two weeks after an article's initial publication. See our comments policy for more.
Joanne Love
4 years 7 months ago
Dear god in heaven! Please do not corrupt my faith! This is the most bizarre election ever! Holy Spirit, Help Us!!! And, a God forgive us...
Lisa Weber
4 years 7 months ago
Donald Trump trying to take the high road on any issue is laughable. I liked the comment in my local paper today that Trump is someone "Christ might have driven from the temple with a whip." It's by far the funniest comment of this entire election.
KATHERIN MARSH
4 years 7 months ago
It is Hillary who is greedy, and corrupt. She who became wealthy by being a "public servant" by kawtowing to Warren Buffet. Hillary at first supported the pipeline, then when Warren Buffet wanted his trains to carry the oil instead of an interstate pipeline, Hillary turned face, Both Hillary and Donald are beyond disgusting. Donald TALKED dirty to Billy Bush years ago. Disgusting. Hillary husband actually acted on the talk and did sexually molested women. With Hillary we WILL go to single insurer, like Canada. And it will be terribly expensive. And the taxes of the middle class will continue to rise. Donald says get rid of Obamacare. Have no exclusions for or existing and open it to free market competition And he says he will lower the taxes in the middle class to 15%. Donald also says Nafta was terrible because our country stopped child labor and set minimum wages and gave maternity leave and set strict labor laws, so Bill Clinton let his wealthy corporate friends love production to China. Where there are no child labor laws, minimum hage and wage laws, AND no paid maternity leave, I says I was flipping a coin on Election Day, and I still am. But nobody will impeach Clinton if she flip loos. Ruins US. They will however hold Donald to his word.
William Rydberg
4 years 7 months ago
Isn't it sad that these outsiders only see Catholic Unity to be something of an obstacle. St Paul of Tarsus wrote about "powers and principalities". After two millennia, the opposition is still going strong in the highest echelons of secular Power. Scripture is such an Inspired gift, ever fresh, ever new. Thank God for Scripture, the Magisterium, and Holy Tradition. All gifts of the Trinity. in Christ,
KATHERIN MARSH
4 years 7 months ago
I'm am sad that Donald is xenophobic. But that is something the senate and congress can countermand. Hillary is so insider Washington, that it is like she deals her term in office to insider traders. She is so bought and paid for by a handful of mega millionaires, and a new liberalism, that she cannot be trusted or forced to keep her word to anyone except her hand full of millionaires. She says she passed healthcare for children when Bill was President? She lies. And lies. She has become wealthy making, what? 25 million a year now, Off middle class American.
Franklyn BUSBY
4 years 7 months ago
There is certainly nothing newsworthy about the leaked eMails. As a church musician, I have had to deal with formerly protestant married priests who betrayed their vows and holy orders as Episcopalian/Aglican and Lutheran clergy to become priests in the Roman Catholic Church. In every instance, they fled the churches of their birth in response to the supposed liberal/progressive stands of the churches in which they were ordained. Having made "the swim across the Tibre," in every instance these men tried to force a 1930's model on the church where they were placed; doing away with female Altar Servers and EMHC, instituting masses in Latin, wearing fiddle-back and highly laced vestments, etc. We had one married priest who preached about the evils of abortion (and the women who have them) every Sunday for 3 months straight. This while he had six children and spoke often about how sad he was that his wife had had a hysterectomy (from the pulpit). One has only to look at the right-wing echo chamber known as EWTN to see that a majority of their talking heads and leadership are former protestants and fundamentalists. The same goes for the right-wing journal of record, First Things.
JR Cosgrove
4 years 7 months ago
Actually, I think the most interesting thing Pedesta said was

And he agreed with Sandy Newman when Newman called the Catholic Church a Middle Ages Dictatorship and said that something should be done about Catholics. Pedesta replied that they have set up Democratic front organization under the guise of being Catholic.

We created Catholics in Alliance for the Common Good to organize for a moment like this. But I think it lacks the leadership to do so now. Likewise Catholics United. Like most Spring movements, I think this one will have to be bottom up. I’ll discuss with Tara. Kathleen Kennedy Townsend is the other person to consult.