How the U.S. violates international law in plain sight 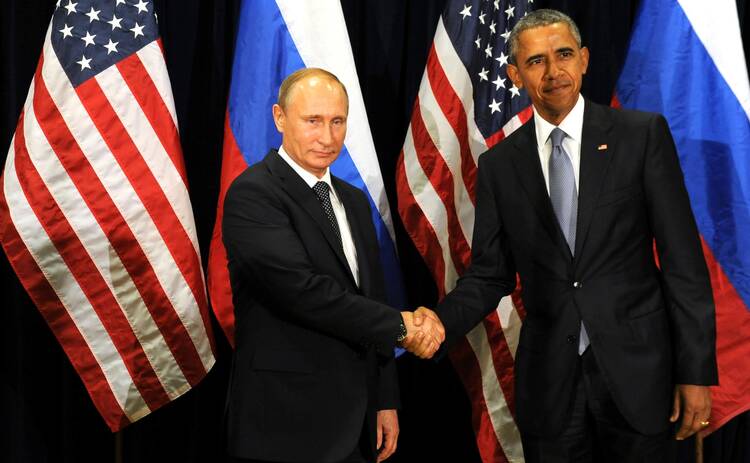 The law of war prohibits force unless force has been approved by the U.N. Security Council or unless a country has been attacked and is acting in self-defense. Even under those conditions, force is regarded as a last resort, permissible only if it is likely to be successful.

Diminishing respect for international law can be linked to the rise of the United States as a military power after World War II, to the domination of U.S. foreign policy by realists who emphasize U.S. military might and our willingness to use it, and even to the civil rights and feminist movements of the 1960s. As interest in the Constitution was renewed, Americans turned inward and perceived the struggle for justice almost exclusively through their own legal system.

The terrorist attacks on Sept. 11, 2001, led the United States to embrace military force in a way it had not done before. Along with that came indefinite detention, torture and the kidnapping of terrorism suspects and their rendition to secret black-box sites. But some of those abuses go back before President George W. Bush, to the Clinton administration in the 1990s.

“The Clinton administration had some vaunted notions of what you could do with military force,” O’Connell said. “They thought you could use military force to promote human rights, so they regularly bombed Iraq to help the Kurds in the north and the Shias in the south. In the views of other countries, France and Russia in particular, that constant bombing was unlawful and counterproductive. The British unfortunately, did not [share this view]. Already the mindset was coming into the United Kingdom that you could use military force to help persecuted minority groups. That led to a great deal of unnecessary and counterproductive violence in Yugoslavia. It was the beginning of this mindset that military force could be used with no regard for the U.N. Charter.”

U.S. violations of international law continue. You would never know it listening to our president, our politicians or our news media, but the U.S. intervention in Syria is one of them. In 2013, Michael Ratner, president emeritus of the Center for Constitutional Rights, described it as “an illegal use of force” and “a crime of aggression.” “It’s a war crime. It’s the kind of crime that the Germans were tried for at Nuremberg,” he told the Real News Network.

President Obama’s actions in Syria have been described as the legal equivalent of Vladimir Putin’s in Ukraine—both arming rebels and conducting air strikes.

U.S. drone attacks around the world also constitute an unlawful use of force. We have not been attacked, nor do we have U.N. approval for our targeted killings in Libya, Yemen, Somalia and other countries.

Will these acts of war ever cease? Many Americans seem to forget they are even going on. Discussions of their justice, their legality and necessity, even their cost or effectiveness are almost entirely absent from our politics. To the extent they consider them at all, Americans assume might makes right. The evidence points elsewhere: to the millions of refugees fleeing war, instability and the breakdown of law and order in the world.

Show Comments (
3
)
Comments are automatically closed two weeks after an article's initial publication. See our comments policy for more.
Beth Cioffoletti
5 years 11 months ago
Thank you Margot Patterson for bringing this topic to the table! I remember the sanctions during the 1990s (not sure if it was GB1 or Clinton's administration), when the United States was regularly flying fighter jets over Iraq, limiting Iraq's trade which hurt the people rather than the government, and wondering how Americans would react if we had foreign planes flying over our homeland. It would have been all out war, and yet we were somehow "allowed" to do this to another country. I don't understand the situation enough to make an informed comment regarding Syria, but I am sure that we need more reporting of this in the media in ways that we can trust and understand. The use of drones is atrocious. I look forward to reading Obama's perspective on this when he leaves office.
William Rydberg
5 years 11 months ago
Unless all Executive Power currently vested in the American Presidency is looked at by Congress and Judiciary no Legislative Action however well intentioned will suffice. The latest American President has demonstrated this fact... In my opinion, in Christ, the only Just Judge...
Tim O'Leary
5 years 11 months ago
There are several problems with International Law that this article doesn't raise. Here are some: 1) the relationship between consent of the people and the enactment of an international law is very indirect or partial: 2) nations led by dictators and other non-elected governments are given equivalent voting status with nations who have elected governments; 3) the UN security council can be vetoed by oppressive authoritarian regimes like China and Russia; 4) the ideological influence of unelected but highly funded NGOs on international law can actually result in loss of human rights (the right to life of the unborn, the right of religious freedom, etc.); 5) international courts attempt to overrule or disqualify the national laws (e.g. the US constitution with its Bill of Rights). While the US administrations (including the current one), the Vatican and many governments around the world speak highly of international law, they will quickly depart from international rulings if they believe the rulings produce immoral laws, and rightly so. The prudent stance to international law today should be, in my opinion, one of pragmatic cooperative support. But, support for international law should not be absolute. The very idea of government by the people and for the people is at stake.