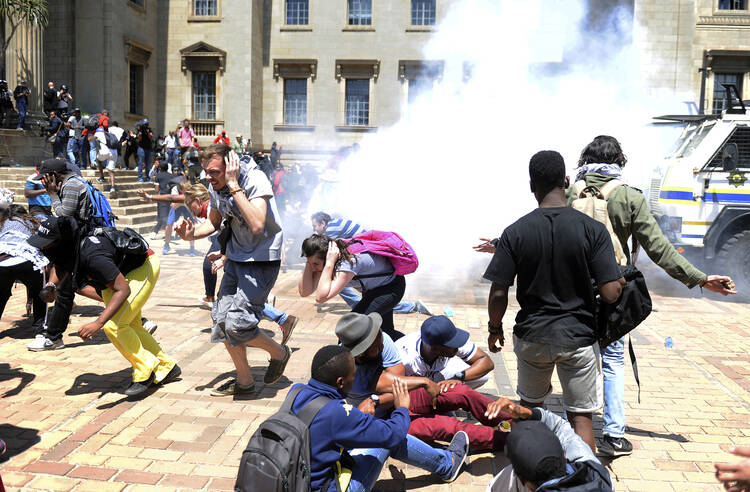 Students and police clash on the University of the Witwatersrand campus in Johannesburg South Africa on Monday, Oct. 10, 2016.

South African media are reporting a "new low" in increasingly violent confrontations between police and students demonstrating against tuition increases, when police apparently fired a rubber bullet point blank into the face of a Jesuit priest near the Witwatersrand campus in Johannesburg on Oct. 10. The victim, Graham Pugin, S.J., is believed to have provided sanctuary for students at the Holy Trinity Catholic Church in Braamfontein, when he tried to block a police vehicle from entering the gate.

Video of the incident was captured by local media. It includes strong language and images of the injured priest:

Below is a complete report from the Associated Press:

JOHANNESBURG (AP) — One of South Africa's top universities descended into violence on Monday, with police firing tear gas, rubber bullets and water cannon at stone-throwing students who are locked in a bitter national dispute with administrators and the government over demonstrators' demands for free education.

Stun grenades boomed and gunshots crackled as police cleared protesters at the University of the Witwatersrand in Johannesburg, the most prominent site of a student movement that recently shut other universities and prompted official warnings that badly needed medics, engineers and other skilled workers might not be able to graduate this year.

"Hell broke out," said Jo Seoka, an Anglican bishop who described the pandemonium that erupted as students hurled rocks at security guards blocking the entrance to the Great Hall, prompting police vehicles to rumble forward. Seoka, who joined an earlier student march, said police had "militarized" the campus, and he criticized them for not wearing IDs on their uniforms that would make them accountable.

As police helicopters circled, some protesters spilled into city streets. A bus was set on fire, and thick smoke billowed into the air. A Catholic priest who appealed for the violence to stop was struck in the mouth by a rubber bullet and was being treated, South African media reported.

The university, also known as Wits, accused students of throwing rocks "that could have maimed or killed people" and said protesters had responded to negotiation offers from the campus administration with threats.

Education Minister Blade Nzimande appealed for dialogue and condemned the violence, saying the university's efforts to run its academic program were being "held at ransom by irresponsible and disrespectful striking students."

Students disrupted classes and threw rocks on several other campuses nationwide, said Khomotso Phahlane, the acting police commissioner. He said there was no need for a national state of emergency.

At least 27 students were arrested Monday around the country. Several people, including two police officers pelted with rocks, were injured.

Large student protests in 2015 forced the government to freeze fee increases this year, but demonstrations started again a few weeks ago when the state recommended that universities increase fees by no more than 8 percent next year.

While the government also said it will cover 2017 fee increases for poor students despite funding challenges, protesters argue that the country must address economic inequities in the education system that date from the country's former system of white racist rule known as apartheid.

"We need to know that models (for free education) are going to be piloted and tested in 2017," followed by preliminary implementation in 2018, said Fasiha Hassan, a law student and protest leader at Wits.

The South African government had failed to address a university financial problem "that has been for years and years and years growing, and really snowballing into what we have now," Hassan said.

The government paid 39 percent of the cost of running universities in the state system in 2015, down from 50 percent in 2000, according to a study by supporters of free education. Dwindling state money resulted in higher fees for students with limited resources, it said. There are currently 26 universities receiving state funds.

Relations between student leaders at Wits and the university administration are so acrimonious that the two sides are not meeting in person, said Terry Tselane, a former student who is assisting with mediation efforts.

Monday's chaos started with protesters moving through science and mathematics buildings, seeking to disrupt classes. Libraries and a large laboratory were empty. Later, there were tense exchanges.

"Move! We're going to shoot here," a police officer in body armor said to a student. "You don't have to shoot me. I'm moving," the student replied angrily.

Asked by a journalist about police ammunition, another policeman said they were rubber bullets and joked that they "wouldn't hurt a fly."

Last week, the South African police said agitators on some campuses were trying to goad officers into "another Marikana," a reference to the police shootings of 34 miners during labor unrest in 2012. The killings shocked the nation and recalled some of the worst violence by security forces during white minority rule, which ended in 1994.

Kevin Smith, a chartered accounting student at Wits, said he had been hit by police rounds at previous protests and worried that people would eventually be killed in the demonstrations.

"That's when our government is going to understand the seriousness of the matter," he said.

Kevin Clarke is senior editor and chief correspondent and the author of Oscar Romero: Love Must Win Out (Liturgical Press).