Want to address Guatemala's migrant crisis? Get this girl a job. 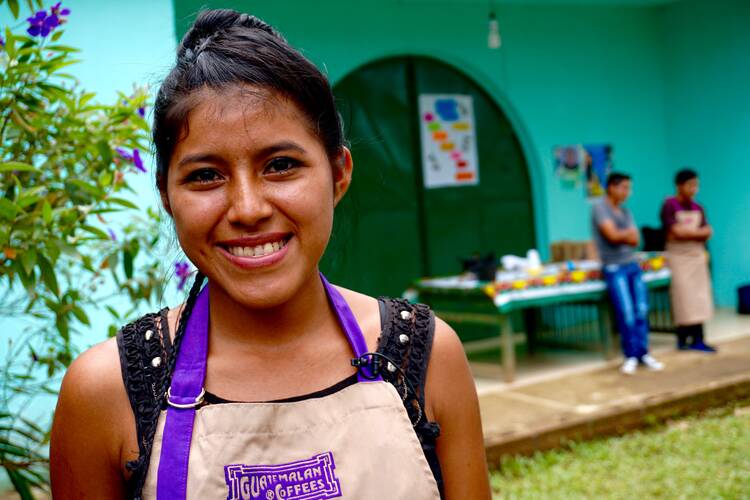 Angelita, just 18 years old, is already an expert in a coffee cultivation, a volunteer firefighter and smokejumper, her community’s de facto E.M.T. and a midwife (she has delivered four babies so far). She studied computer systems in high school, helps out her dad in the fields and her mom in the kitchen and plays soccer in her free time. She says being tired is a state of mind, one she does not have much time for. She has the resume and ambition that in the United States would make any aspiring Ivy Leaguer look over their shoulder.

But, like most young people in the region, she has no job and few prospects for more schooling. When her friends ask her why she does so much for no pay, she has a simple answer: “Es mi vocación.” To support her family, to strengthen her community, to build up her country is her vocation. And to listen to her talk, and to see the bright determination in her eyes, is to know that if she had even the smallest opportunity, she would do all that and more.

I met Angelita at Nuevo Eden (New Eden), a coffee cooperative in Nuevo Progreso, a lush, mountainous district in Guatemala’s western highlands. New Eden, New Progress: The names match the ambitions of those who work this land but belie the continuing struggle to build up the region’s economy. During Guatemala’s 36-year civil war (1960-96), families in the area fled for Chiapas, Mexico, to escape mass atrocities perpetrated against indigenous Maya by military and paramilitary groups throughout the 1980s. Whole villages were razed, women were raped, families were gathered into churches and burned as part of the government’s scorched earth policy. They were in exile for 16 years, and when the war ended, it took another two years of organizing and strikes to force the Guatemalan government to hand over credits to buy back land promised by the peace accords.

But that was hardly the end of their struggle. The land they were able to purchase was in coffee country, and they had no experience in coffee cultivation. Large dealers set the price for beans, and turning a profit is difficult even in a good year. In 2012, roya—a fungus that, thanks to climate change, is reaching trees at altitudes once considered immune to the coffee rust epedemic—wiped out 70 to 80 percent of the small farmers’ crop.

In response, Catholic Relief Services began its Café Verde (Green Coffee) initiative to build up the region’s ecological and economic resiliency. C.R.S. first invested seed capital for rust-resilient coffee plants and then introduced their Saving and Internal Lending Communities model, so that members of the area’s cooperatives could pool their money to fortify and diversify their crops and improve cultivation techniques.

That’s where Angelita comes in. She and some 20 young people from the surrounding communities were given the opportunity to travel to Guatemala City for a week-long training in cupping, a process to evaluate the aroma, flavor and body of the coffee. These young people graduated high school with degrees in teaching, business and computers, but they take obvious pride in this new skill. Angelita says she wants to share cupping with others in her community so that farmers can command a higher price in the market. But while a more competitive coffee product will undoubtedly benefit her community, it is probably not enough to provide the kind of formal employment that she and her classmates are hungry (and clearly qualified) for. Angelita demonstrates "cupping," a technique for testing the flavor, aroma and body of a coffee crop. By testing the beans in this way growers can ensure the highest quality product and command a higher price in the competitive coffee market.

I asked Angelita, one of 10 siblings, if she or anyone she knows have considered leaving for Mexico or the United States. Three of her four brothers are already living in the states; other young people in her community have also migrated or gotten involved in criminal activities to support themselves and their families. She says when she could not find a job after graduating she was tempted to leave. But she cannot imagine leaving her family, and she wants their strength and unity to be a model for their neighbors.

“I’ve had obstacles in my life,” she says, demurring on the details. But her father, a strong and loving influence in her life, told her that whenever she encounters an obstacle, it means there is something good waiting beyond it.

Angelita is magnetic—someone you want to be around, to be friends with and, if you had the chance, to hire. And there are many just like her in this country, some of whom I’ve been lucky enough to meet this week. Anyone concerned about migration to the United States would do well to think less about building walls and more about tearing down the obstacles—corruption, inequality, environmental degradation—holding back thousands of Angelitas.

Ashley McKinless is an associate editor at America and was awarded the 2016 Egan Journalism Fellowship by Catholic Relief Services. She is traveling in Guatemala and Honduras with C.R.S. from Oct. 3 to 14. Follow along on Twitter: @AshleyMcKinless.

Ashley McKinless is an associate editor at America and was awarded the 2016 Egan Journalism Fellowship by Catholic Relief Services. She is traveling in Guatemala and Honduras with C.R.S. from Oct. 3 to 14.

@AshleyMcKinlessmckinless@americamedia.org
Show Comments (
2
)
Comments are automatically closed two weeks after an article's initial publication. See our comments policy for more.
Joseph J Dunn
5 years 7 months ago
What is holding back Guatemala's Young Workers? Indeed, what holds back good, intelligent, hard-working people anywhere? A wealth of useful information is compiled in the World Economic Forum's "Global Competitiveness Report, 2016-2017" http://www3.weforum.org/docs/GCR2016-2017/05FullReport/TheGlobalCompetitivenessReport2016-2017_FINAL.pdf. To be clear, this is not a purely business evaluation or viewpoint, as the assessments of the 138 countries involve government as well as business participants, and focus a great deal on the factors of government, civil, and business institutions that contribute to the quality of life in each country and region. Guatemala ranks 78 out of the 138 countries that participated in this current assessment. The report is worth reading, because it addresses the conditions that hold back Angelita, and so many other good people.
Chuck Kotlarz
5 years 7 months ago
“What is holding back Guatemala's Young Workers?” As the article notes, overcoming the Guatemalan government’s scorched earth policy has been a major obstacle. Nobel prize winner Angus Deaton's book, The Great Escape, explores over two hundred years of government, democracy and the economy of countries around the world and their impact on outcomes. The 2015 “Democracy Index” lists nearly sixty countries as a “Flawed Democracy”, a category just below “Full democracy”. Guatemala, currently the country next in line, perhaps will soon join the category as the 60th country, For comparison, the US occupies the last position on the “full democracy” list of twenty countries perhaps due to 10,000 DC lobbyists on a multi-billion-dollar annual corporate payroll. https://en.wikipedia.org/wiki/Democracy_Index#Democracy_index_by_country_.282015.29