After Hurricane Matthew, should the U.S. border stay closed to Haitians? 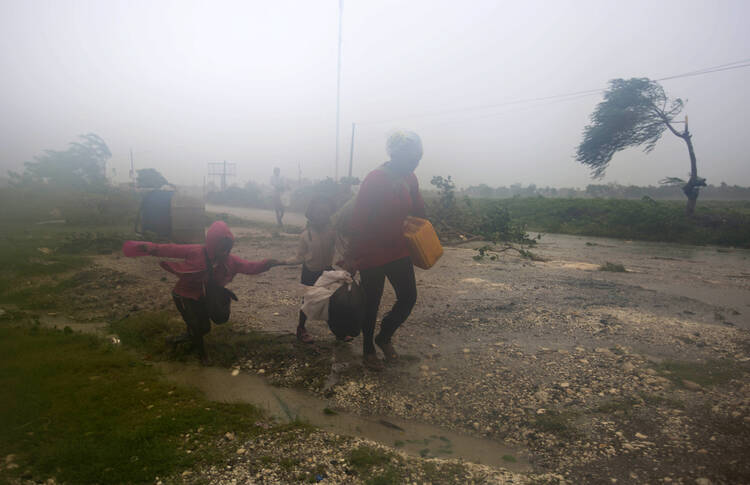 Hurricane Matthew hit southwest Haiti on Oct 4. At landfall Matthew was rated a Category 4 hurricane with winds up to 145 mph. Anywhere between 15 and 40 inches of torrential rainfall and a storm surge of over seven feet high was expected. It is the largest storm the region has experienced in a decade and the worst storm to hit Haiti in 50 years.

Though it is still too early to know the full damage, reports so far indicate close to 15,000 people have been displacedand that a major bridge has collapsed. Aid groups in the country also report that many crops that had been about to be harvested and cattle have been destroyed. Christian humanitarian group World Vision, which works in the region, also predicted many houses will come down. “With wind this strong, it will be extremely damaging and dangerous,” national director John Hasse said. “Homes for the average person are made of mud and sticks or poorly constructed cinder blocks.”

The hurricane comes less than two weeks after the Department of Homeland Security suddenly terminated temporary protective status for Haitian migrants, a decision that effectively closed the U.S. border to survivors of Haiti’s devastating 2010 earthquake. They had been traveling to the United States by land over the last five months after political and economic instability in Brazil forced them to leave what had become their new homes.

D.H.S. Director Jed Johnson said at the time of the announcement that conditions in Haiti “had improved sufficiently to permit the U.S. government to remove Haitian nationals on a more regular basis.” It is a claim disputed not only by advocates, but basic facts. The country has struggled since 2010 to rebuild; it’s the poorest country in the Americas, with 80 percent of the population living in poverty.

Since the earthquake, the nation has also been the victim of an ongoing cholera epidemic—likely brought in by United Nations peacekeeping forces from Nepal—that has killed thousands. Riots amidst accusations of a rigged election in January have left the country without a government for nine months. “No one is sure who is really in charge here,” the Washington Post reported in June. New elections scheduled for Sunday, Oct. 9, have been suspended because of the chaos created by the hurricane.

Haiti is currently ranked 10th on Foreign Policy’s Fragile States Index (and has been in the top 11 every year since 2010); in June the State Department cautioned Americans about visiting Haiti due to its lack of emergency services and political instability.

Despite the D.H.S. announcement, hundreds of Haitians continue to arrive at the border intent on presenting themselves to U.S. customs, according to the San Diego Union-Tribune.

The San Diego Immigrant Rights Consortium, which has been working with the over 5,000 Haitian immigrants who came through before D.H.S.’s sudden reversal in policy, has urged the department to reconsider its position. Ginger Jacobs, chair of S.D.I.R.C., said, “The U.S. Government’s decision to detain and deport people back to this destitute land is inhumane....If deported, these people have a limited chance of prospering in such desperate conditions.”

Thus far, D.H.S. has given no official statement about revisiting its policy shift in light of the hurricane. After repeated requests for comment, the department responded, “No further announcements have been made at this time. DHS is monitoring Hurricane Matthew and will assess its impact on current policies as appropriate.”

It is true that the full extent of the newest devastation in Haiti will take time to assess. But if rampant poverty, a cholera outbreak, a crime spree, a government in freefall and the plain fact that Matthew is the worst hurricane to hit Haiti in 50 years do not constitute “appropriate” circumstances for reassessment, one wonders what would.