Skip to main content
Politics & SocietySigns Of the Times
May 4, 2009 issue

In Israeli Jewish Schools, No Teaching About Christianity

In Israeli Jewish Schools, No Teaching About Christianity 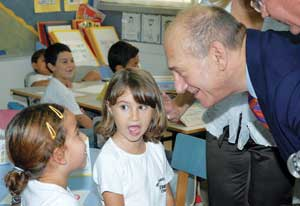 Daniel Rossing uses one word to sum up the extent of teaching about Christianity in Israeli schools: none. “The answer is very simply no. Israeli students do not learn about Christianity in school,” said Rossing, director of the independent Jerusalem Center for Jewish-Christian Relations. “All indications are that there is a very widespread ignorance with regard to Catholicism in general and in particular in regard to the revolutionary changes which have taken place in the Catholic Church regarding Judaism and the Jewish people,” said Rossing, who is an Orthodox Jew.

The Jerusalem Center and the independent Jerusalem Institute for Israel Studies recently released the results of a survey looking at Jewish Israeli attitudes toward Christianity. Given the lack of exposure young people have to Christians and Christianity, Rossing said, he was not surprised by results that showed young Israeli Jews tend to be less tolerant of Christians than people over 30. People under 30 “are solely the product of the educational system and don’t have contact with Christianity, while [older people] have had other influences and opportunities for encounters,” said Rossing.

Currently, if anything about Christianity is taught, says Rossing, “it is about the Crusades and the Inquisition. There is no teaching of comparative religion.” In response, some educators are pushing for teaching about the local Christian communities in the schools so students can at least learn about “our neighbors in this land,” Rossing said. In schools where there are some local educational initiatives, there is more freedom in the curriculum and more exposure to the history of Christianity as a religion, but it is not a formal program reviewed and approved by the ministry of education.

“Jewish kids in Israel who finish high school will be totally ignorant about Vatican II. They will not have a clue,” said Rabbi Ron Kronish, director of the Interreligious Coordinating Council in Israel, which conducted its own study of the issue 10 years ago. At the time there were a few attempts to approach the subject in cultural studies classes, but not much has changed in the past decade, he said. In fact, according to Kronish, the situation may be worse. Most school-age children, for instance, will not have heard anything about the pilgrimage to Israel by Pope John Paul II in 2000. “I have never heard about someone in Israel taking [it] upon himself to educate Jews about post-Vatican II Christians,” said Rabbi Kronish.

This article also appeared in print, under the headline “In Israeli Jewish Schools, No Teaching About Christianity,” in the May 4, 2009, issue.