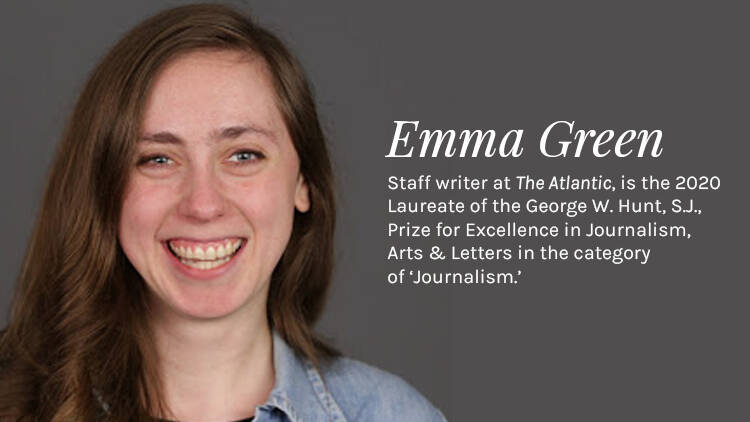 New York, N.Y. – The trustees of Saint Thomas More Catholic Chapel & Center at Yale University and the directors of America Media are pleased to announce that Emma Green, staff writer at The Atlantic, is the 2020 Laureate of the George W. Hunt, S.J., Prize for Journalism, Arts & Letters for outstanding work in the category of Journalism.

“Emma is a young, dynamic and accomplished writer,” stated Matthew F. Malone, S.J., president and editor in chief of America Media, “and the committee is delighted to be able to recognize her natural talent as a reporter and journalist.” “The Hunt Prize is meant to recognize the work of young writers whose work inspires and promotes the best of Roman Catholic intelligence and imagination,” said the Rev. Ryan Lerner, Chaplain of Saint Thomas More Chapel & Center at Yale, “and Emma’s theologically-nuanced writing engages with some of the most important political and religious questions of our time. She is a worthy and timely recipient of the 2020 Hunt Prize.”

Ms. Green will be awarded the $25,000 prize in September. In addition to receiving the monetary prize, she will also deliver an original essay at the ceremony that will later be published as a cover story in America magazine.

Emma Green is a staff writer at The Atlantic, where she covers religion and politics, including the 2016 and 2018 elections, conservative religious subcultures, minority religious communities, federal court cases, and social issues. She has also served as Senior Associate Editor for Politics as well as Managing Editor of TheAtlantic.com.

A graduate of Georgetown University, Ms. Green has been recognized by the Religion News Association, winning three first place awards in 2019, for feature writing, news analysis, and magazine reporting. Her writing has been featured in The New York Times and The Washington Post, and appearances include NPR, MSNBC and CNN.

The George W. Hunt, S.J., Prize for Excellence in Journalism, Arts & Letters, was established in 2014 to honor the memory of George W. Hunt, S.J., the longest-serving editor in chief of America magazine, and to promote scholarship, the advancement of learning and the rigor of thoughtful, religious expression; to support and promote a new generation of journalists, authors and scholars; and to support the intellectual formation, artistic innovation and civic involvement of young writers. Previous recipients of the Hunt Prize are:Dr. Philip J. Metres III, of John Carroll University;Elizabeth Dias, of The New York Times;Liam R. Callanan, of the University of Milwaukee-Wisconsin;Phil Klay, of The American Scholar; andMary Szybist of Lewis & Clarke College.

Saint Thomas More Catholic Chapel & Center at Yale University serves the Catholic community at Yale by creating a vibrant and welcoming community through worship and service; cultivating informed faith and spirituality; engaging in reflective discourse on faith and culture; advancing the church’s mission of promoting social justice; and participating in the global church’s life and witness.

America Staff
Provide feedback on this article
Join the conversation: Login or create an account
Before you can comment, you need to update your profile to include your first and last name, as required in our comments policy. Then reload this page and you'll be set up for commenting. Update your profile