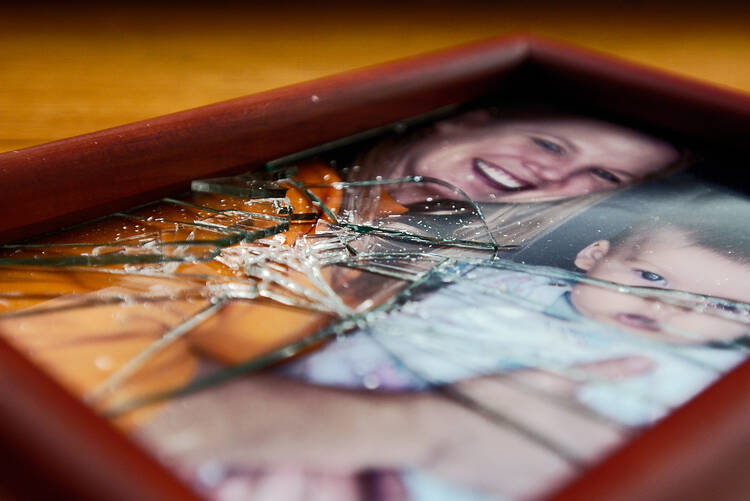 At a parish on Chicago’s North Side, Charles Dahm, O.P., finishes reading the Sunday Gospel, the familiar story of a woman accused of adultery who is threatened with public stoning until Jesus intervenes. Father Dahm then launches into a homily that surprises many.

“Today I would like to speak about women who are abused in their own homes, who suffer in silence and secret,” he says. “How many of you have ever heard a sermon about domestic violence? Raise your hand. See, no one.”

Father Dahm is a priest on a mission—to bring domestic violence out of the shadows and into the consciousness of parishioners throughout Chicago. He hopes to prompt pastors to make domestic violence prevention as important a ministry as Christian initiation of adults, Bible study or marriage preparation.

A Dominican priest for 50 years, Father Dahm says he thought little about domestic abuse until he became the pastor of St. Pius V Church in Chicago’s Pilsen neighborhood. One day, the pastoral counselor told him, “Father, almost all my clients from the parish are women, and most of them are victims of domestic violence.”

Father Dahm says, “I had no idea, and I knew many of these women.”

With only a small budget and mostly volunteers, Father Dahm quickly found counselors trained to deal with domestic abuse. They helped form support groups for the women, their children and husbands who recognized they had a problem. Father Dahm placed information in the church bulletin on where to find help. Most important, he preached about the problem.

Father Dahm is now spreading his message to other Chicago parishes. Sometimes it’s an uphill battle. One pastor told him a homily on domestic violence might upset the congregation’s children. “One of the worst things you can do with your children is let them grow up in a home where there’s violence,” he says. “Your daughters are learning how to be submissive to this abuse and your sons are learning how to be abusive.”

One in four U.S. women reports having been hit or sexually assaulted by a partner, according to the federal Centers for Disease Control and Prevention. Others suffer emotional, psychological or financial abuse. Wordwide, 35 percent of women report physical or sexual violence, according to the United Nations, but the rate is as high as 70 percent in some countries.

Church teaching on domestic violence is clear. “No person is expected to stay in an abusive marriage,” the bishops wrote in their pastoral letter, “When I Call For Help.” “Violence against women, inside or outside the home, is never justified.”

Churches can serve as significant partners in the fight against domestic violence, but they are sometimes part of the problem, says Jan Burdulis, who helps Father Dahm establish support groups. “So many women I’ve worked with over the years are practicing Catholics, and they cannot comprehend the idea that it would be acceptable if they were to leave and get divorced.”

After Father Dahm preaches, he invites parishioners interested in combatting domestic violence to meet with him. As many as 40 people have shown up at a single parish.

“I divorced my abuser, but was about to marry another abuser, so this is a cycle that continues unless you get help,” one woman told Father Dahm.

His approach also stresses helping abusers. Being in an all-male group was important to Roman Carreon. He had for years rebuffed his wife’s pleas to go into counseling with her.

Carreon says he didn’t think he had a problem because he never hit his wife, though he often called her names or didn’t speak to her for days if they argued. “To me, I was a nice man.… I thought I was doing better than most of my family,” he says. But listening to other men talk about how they treated their wives, he says he realized that was how he too behaved. He vowed to change.

“I did a lot of things I regret. But now I can live the rest of my life with my wife without violence,” he says.

Judith Valente, America’s Chicago correspondent, is a regular contributor to NPR and “Religion & Ethics Newsweekly.” Twitter:@JudithValente. For resources on domestic violence, visit the Archdiocese of Chicago at bit.ly/1DCSmSd.

@JudithValente
Show Comments (
2
)
Comments are automatically closed two weeks after an article's initial publication. See our comments policy for more.
Chris NUNEZ
7 years 10 months ago
Father should be commended for using the reading to address this endless problem. His homily diverted from what I personally consider one of the most important readings in the gospels and is the most revelatory piece of literature because it shows how to bring scapegoating violence to and end. But the reading has been glossed time and again for as long as I can remember. Just the same, taking this story and transforming its violence against a woman by this mob of most likely all men is one of the most creative things that anyone in the position could do. Perhaps one day somebody will use this Lenten reading in the way it should be used to show how adherence to the 'law' helps the falsely accused. It would have saved Jesus when he was taken before the leaders later on... and that is why this reading is the most powerful and revelatory reading in the gospels. But Father's appropriation was equally good.
Paul Ferris
7 years 10 months ago
As a person who lost his sister, Patricia, in 1980 to domestic violence, I can only thank Judith Valente and America for this article. I had never made the connection between Jesus saving the woman caught in adultery and this Gospel reading. If I recall Jesus bends down and starts writing something. Maybe he was writing the shameful violent acts of the men who were getting ready to stone the woman or even their own adulterous acts, . Also isn't adultery a sin involving two people ? Incredibly in some countries this practice of stoning still goes on under the name of honor killing. Again thank you America and Judith, and of course Father Charles Dahm O.P.for making the connection in the first place and doing something about it. I will never forget the connection again and have sent this to my FB account.