Job in Minnesota: "A Serious Man" tackles the problem of suffering 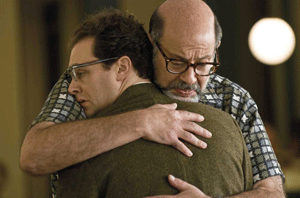 Every joke has a hook, some a little sharper, darker and more septic than others. In Woody Allen's poison-laced 1989 comedy "Crimes and Misdemeanors," for instance, the principal character has his troublesome mistress killed and then, despite a period of epic remorse, goes on to lead a normal life. If there was a model for Martin Landau's character, Judah Rosenthal, it might have been the narrator of Robert Browning's "Porphyria's Lover," who is disquieted to find that having strangled his girlfriend and sat through the night with her body (awaiting the divine thunderclap), "still God has not said a word."

Browning is not remembered as a comedian, but Woody Allen is and so are Ethan and Joel Coen. Their new film, A Serious Man, is the cosmically darkest "comedy" since Allen's "Crimes," speculating about not only what God says and how, but also about the fate of the spiritually deaf. Browning was not Jewish, but the fact that the Coens are is no small matter within a film where culture and belief have become indistinguishable and inseparable.

Predictably, the filmmakers responsible for "Raising Arizona," "Barton Fink," "Fargo" and other acts of existential mischief (the Oscar-winning "No Country for Old Men" having been a tonal aberration) open their film with a metaphorically pointed example of pure faith: an ice pick through the heart. In the opening sequence, a 19th-century, Yiddish-speaking husband returns home to tell his wife of an encounter on the road. He has met an elder of their acquaintance and invited him to come in from the blizzard that is whipping their czarist-era shtetl to their home. The wife is aghast: She has it on good authority that the very rabbi of whom her husband speaks died three months earlier. What her husband has seen, therefore, must be a dybbuk, or malevolent spirit, which has taken possession of the dead man's body.

When the visitor arrives, she stabs him through the heart. His existence defies what she "knows." She feels no remorse. The rabbi, oozing blood from his recent perforation, stumbles back out into the snow.

There is a window in the couple's home. Fittingly, it offers a small view of the outside world. Whether it is a matter of theology or a half-open curtain that obscures sight, the rabbi/ dybbuk seems not to appear exactly where he should after he leaves the cabin and heads off. Is he a dybbuk, then? One might write this off to cinematic carelessness if everything else in the new Coen movie were not so thematically purposeful. This includes the provocative suggestion as the movie leaves the 19th century for the 20th--specifically, for suburban Minneapolis circa 1967--that the religiously defined community per se does not change much, with all the loose ends between faith and practice wriggling about like a venomous anemone, trying to strangle the clown fish of spiritual complacency.

At the recent Toronto Film Festival, a colleague asked if I had seen "the new Coen brothers" (the director-possessive being festival shorthand). "If I were Jewish," he added, "I'd think it was the most anti-Semitic film since Jude Suss," referring to the notorious Nazi-produced drama of 1940. But this seemed an overly solemn, goyische reaction. While I have to qualify my impressions by saying that I am a Catholic, "A Serious Man" seems as difficult to peg as anti-Semitic as it would be to call a Tyler Perry production anti-black or "The Quiet Man" anti-Irish. All are of their specific cultures and find humor in the characteristics of that culture. While the Coens make jokes about Jewish cliches, they are also looking for the answer to matters far more profound.

Larry Gopnik, played by the largely unknown but perfectly cast Michael Stuhlbarg, is an as-yet-untenured math professor at a middling Midwestern university, a father of two, husband of one. His wife, Judith (Sarri Wagner Lennick), who wears the melted-LP hairstyle of the late-1960s Junior League and provides Larry with no comfort. While her biblical namesake cut off her enemy's head, this Judith aims a little lower. She wants a divorce, she tells her husband, because of the special relationship she has developed with the widowed Sy Abelman (Fred Melamed), an unctuous example of self-satisfied, fleshy-lipped suburban maleness. Being cuckolded by Sy is  adding insult to injury, but Larry is too stunned by the abruptness of it all to register much beyond confusion over why a good man like himself is becoming, in his mind, the 1967 Minnesota version of Job.

He is overstating his own misery, of course, but Larry's reaction to everything is bewilderment. He fails to confront two logical possibilities: either there is no God, or Larry has not tuned in to the heavenly frequency. Larry's brother, Arthur (Richard Kind), he of the constantly draining sebaceous cyst (see Job), has moved in and is not moving out. And Larry's son, Danny (Aaron Wolff), who is stealing Larry's money to buy pot, is being persecuted by a school bully while preparing for a bar mitzvah about which no one seems to have a spiritual care. Danny's sister, Sarah (Jessica McManus), is saving up for a nose job, an idea that gets a stronger reaction out of Larry than does the announcement that his wife is leaving. His amorphous identity as a Jew seems more important to him than his identity as a man. It is perhaps in this regard that my colleague heard echoes of Jude Suss; but more likely it was in the film's suffocating portrayal of Hebrew school, social gatherings and the self-righteousness cloaked in religious belief that confronts Larry on every front.

Western pop culture seems to be in the midst of a love affair with the early 1960s. "Mad Men," "Revolutionary Road," and the recently-released "An Education" all exploit an overly ripe era when nothing much was happening, but everything was about to: the Second Vatican Council, the Beatles, J.F.K., the Civil Rights Act, women's liberation. It is a measure of the Coen brothers' amused contempt for their own upbringing (on which "A Serious Man" allegedly is based) that none of these events, even by the mid- to late-1960s, have penetrated the virtually closed society of "A Serious Man" (clearly, the Johnson-era equivalent of the shtetl).

Larry cannot deal even with the relatively small problems he has to face. He seems not to love his wife anyway; his tenure seems on track despite the treacheries of an embittered failing student; his children are irritating but not pathologically so. He needs a wake-up call, which is what he literally gets as the film ends; and the Coens leave us hanging in the cosmic breeze, wondering whether Larry can come to grips with a God of whom he has no knowledge and find a way to stop being so guilty of innocence.

John Anderson is a film critic for Variety and The Washington Post and a regular contributor to The New York Times' Arts & Leisure section.

good review but proloque and story leave me in a quandry