Skip to main content
Signs Of the TimesAugust 17, 2009 issue

The State's Duty to Protect: Enforcement in Question 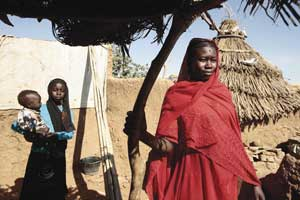 A nation-state’s duty to support and defend its population, known as the responsibility to protect, or R2P, was the subject of a debate at the United Nations General Assembly in July. The global body had already affirmed the concept of R2P at a meeting with almost 150 world leaders in 2005. R2P is invoked in order to prevent four major crimes—namely, genocide, war crimes, ethnic cleansing and crimes against humanity. The July debate, the first on the subject at the United Nations since 2005, reflected the fact that not all member states agree on how to implement the three pillars that support it.

Pillars one and two have received overall support from U.N. member states. The first pillar underscores the responsibility of nation-states to protect their own people from violence that may arise from within, including prevention of both the crimes themselves and the incitement to crime. The 1994 genocide in Rwanda, with an estimated one million slain, stands out as the most horrific example in recent decades of a state’s failure to fulfill this primary duty. Other tragedies like the Holocaust, the Khmer Rouge “killing fields” in Cambodia and the massacres in the former Yugoslavia also stand out as matters for shame.

The second pillar focuses on the responsibility of the international community to assist sovereign states that are struggling with impending violence within their borders, aiding them through capacity building and by establishing early-warning capabilities. Secretary General Ban Ki-Moon noted in a report on July 21 to the General Assembly that “the world has underinvested in preventive capacities” and had “failed to notice looming mass murder” in Rwanda and elsewhere. Such failures reflect what he termed both a “paucity of will” and a “vicious cycle of...finger-pointing in the face of unfolding atrocities.” The same failings have also contributed to the international community’s failure to stop the present-day mass violence in Darfur, the Democratic Republic of the Congo and Somalia, the three most pressing unresolved conflicts.

Controversial elements. The third pillar of R2P is more controversial. If a country fails to protect its own people, and all subsequent peaceful attempts by the international community to assist a people fail, then the R2P principle permits the collective use of force under the authorization of the United Nations. Key issues revolve around who is using the force and upon what populations, and whether the use of force is proportionate and clearly prescribed by the R2P principle. Miguel d’Escoto Brockmann, president of the General Assembly, said on July 21 that recent events have engendered a “prevailing lack of trust among developing countries” regarding any use of force by the developed countries. He cited Gaza as an example of an inappropriate use of force by Israel, which inflicted numerous civilian deaths deaths, and which the international community did not oppose, thereby undermining the purpose of international law.

Similarly, the American academician Noam Chomsky pointed out, during a panel discussion before the General Assembly the same week, that Israel’s use of superior force had the backing of the United States, thereby compounding the damage inflicted. He also pointed out that early warning signs of impending humanitarian disasters tend to be ignored when responding might interfere with profit motives. He cited eastern Congo as an even worse disaster than what is happening in Darfur, with Western corporations also “robbing” the region of valuable minerals. Western governments, Chomsky said, have done nothing to prevent this theft.

Sovereignty principle. The very concept of R2P stems from a positive view of sovereignty as responsibility. But past events like those in Rwanda, as well as ongoing conflicts in Darfur, the Democratic Republic of Congo and Somalia, show that this positive view of sovereignty is not shared by all. The three pillars of R2P are not thought to be of equal height, and what rests on top of them can therefore be unbalanced. The answer may well lie, as d’Escoto Brockmann said in his opening statement, in the creation of “a more just and equal world order, including in the economic and social sense, as well as a [reformed] Security Council.” In the meantime more needs to be done to build trust and to recognize that pillar three may provide the only solution to some otherwise intractable situations. As Archbishop Desmond Tutu put it in an open letter to the member states, “If a state cannot or will not prevent or end these crimes, then the international community must...take decisive action...by protecting vulnerable peoples when States are unwilling to do so.”

Most would not deny that the R2P principle has been misused by powerful nation-states. Susan Rice, the U.S. ambassador to the United Nations, has said that it had been inappropriately used in conflicts like the largely American-led invasion of Iraq. But there have been some notable victories. In his report, the secretary general spoke approvingly of the way the international community’s timely intervention in Kenya took place early enough to forestall further bloodshed after the disputed election of 2008. As he put it, “If the international community acts early enough, the choice need not be a stark one between doing nothing and using force.” Less than stark choices are now available, if the needed political will is brought to bear.


George M. Anderson, S.J., is an associate editor of America.