Gift to a Good, Gray World: The life and legacy of Corita Kent 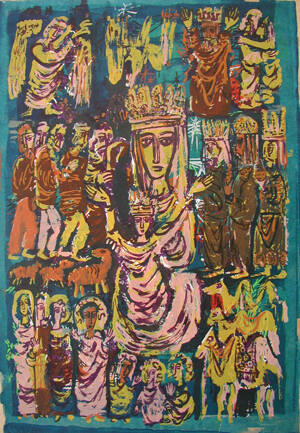 Last year was the 25th anniversary of the passing of one of the most outspoken and well-known activists within the Catholic Church during the turbulent 1960s. Corita Kent, once known as Sister Mary Corita, I.H.M., never backed down from her desire to call people to the simplicity of the Gospel through revolutionary art, despite enormous pressure from within and without the church.

Once tagged “the modern nun” in a Newsweek cover story in 1967, Corita initially produced pleasant serigraphs featuring traditional color schemes and distinctly religious subject matter. She chose serigraphy, a process of hand-applied silkscreen, to create a large quantity of accessible, low-cost prints. Her serigraph “the lord is with thee” won first prize in the print division of a Los Angeles County art competition and brought her public acclaim in the 1950s.

But with the seismic shifts in American pop culture, Corita’s art shifted as well. She was among the first pop artists to appropriate advertising slogans and logos and turn them into reminders of God’s presence in everyday life. Her creative approach drew raised eyebrows from some, who preferred that she stick to less controversial expression. The colorful, circular logo from a bag of Wonderbread became an image of the Eucharist—truly “wonder” bread. Corita was testing convention and finding success. It is perhaps not surprising that she never received full credit for being among the first to experiment with using common images and twisting texts to express her thoughts. Would the canon of modern art recognize a woman—and a woman religious at that—for contributions that equal those of her contemporary, Andy Warhol?

As Corita’s political activism grew, her art began to feature psychedelic colors and more strident messages. She later gave Daniel Berrigan, S.J., the peace activist, credit as a source of her powerful activist art of the mid- to late-1960s. “I suppose people like Dan had a lot to do with it because he was the first one I had ever heard speaking about the Vietnam War…. And I think living with people who were socially conscious helped a lot. I’m sure if I had been a nice proper housewife, I would not have bumped into all of these ideas,” she said in an interview in 1977 for an oral history project at the University of California. Her 1969 serigraph “phil and dan” features a news photo of the Berrigan brothers burning draft cards, in fluorescent orange. It is striking, engaging and challenging to the viewer, perhaps requiring a greater response than her earlier serigraphs.

That is the point Corita was trying to make; if her early serigraphs were whispers, these were screams. She screamed against the Vietnam War, against racial prejudice, against injustice.

In 1968 Corita, probably exhausted, left the Immaculate Heart of Mary community and moved to Boston. Suddenly alone and needing to support herself financially for the first time in her life, she continued to accept corporate art commissions like those she had done for Neiman Marcus and Westinghouse. She declined an offer to join Harvard University in order to discover the joys and sorrows of a solitary artist’s life. In addition to commissions from Revlon, Samsonite and other firms, Corita worked free of charge for many nonprofit groups.

Although her underlying messages remained the same, she switched to watercolors that featured swaths of happy, rainbow colors and brief platitudes. Gone were the acid greens and yellows and the twisted Helvetica typefaces falling off the edges of the serigraphs. Gone were lengthy literary quotes from Beat generation writers and direct challenges to the viewer to take action. Now Corita focused simply on love. She once explained the shift: “The serigraphs were bold, are bold, and they make a statement,” she is quoted as saying in Come Alive! The Spirited Art of Sister Corita, by Julie Ault. “The watercolors, on the other hand, make conversation. I feel that the time for physically tearing things down is over. It is over because as we stand and listen we can hear it crumbling from within.”

Around this time Corita created the largest copyrighted painting in the world. She was commissioned by Boston Gas to paint an enormous gas storage tank on a major thoroughfare just outside Boston. She also created her smallest work. At one square inch, the “LOVE” stamp commissioned by the U.S. Postal Service is perhaps Corita’s best-known work of all; over 700 million were sold.

Although Corita was diagnosed with cancer around 1974 and passed away in 1986, her legacy remains vibrant. Today the Corita Center in Los Angeles bustles with activity, filled with fellow former I.H.M.’s and others determined to carry her message into the future. The walls are filled with bright serigraphs, and a tiny gift shop keeps her art accessible to all, as Corita wished. Perhaps the best summary of her legacy comes from Daniel Berrigan, S.J., who wrote in Come Alive!: “The joy in her work, its riotous color, was her gift to a good gray world. It seemed as though in her art the juices of the world were running over, inundating the world, bursting the rotten wineskins of semblance, rote, and rot…one emotion seemed denied to Catholics…they needed joy, joy, joy! Corita Kent had it in abundance. She gave it, pressed down, flowing over.”

Suzanne Wielgos is an adjunct instructor of writing at the College of DuPage and at Lewis University, both in Illinois.

Show Comments (
1
)
Comments are automatically closed two weeks after an article's initial publication. See our comments policy for more.
10 years 10 months ago
Did you know that underneath the location of the price on the "Love Stamp" that the original piece of art had these words "...is hard work." Indeed!!!
Mary Killmond