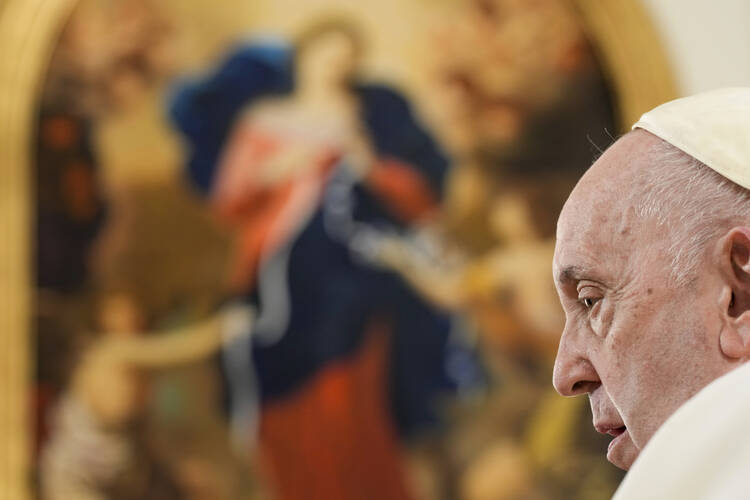 VATICAN CITY (AP) — Pope Francis has shed light on the Catholic Church’s handling of sex abuse allegations against East Timor’s Nobel Peace Prize-winning independence hero, suggesting that he indeed was allowed to retire early rather than face prosecution or punishment.

Francis made the revelation in a wide-ranging interview Tuesday with The Associated Press, in which he also denied he had a role in deciding the case of a famous Jesuit artist whose seemingly preferential treatment cast doubt on the Vatican’s commitment to cracking down on abuse.

Francis acknowledged the Catholic Church still had a long way to go to deal with the problem, saying more transparency was needed and that church leaders must speak out more about abuse of “vulnerable adults.”

Francis recalled he had a steep learning curve on abuse, admitting that his “conversion” moment came during a 2018 trip to Chile, when he discredited victims of the country’s most notorious predator priest. Journalists, including from the AP, questioned Francis about his remarks during the flight home.

Francis recalled he had a steep learning curve on abuse, admitting that his “conversion” moment came during a 2018 trip to Chile, when he discredited victims of the country’s most notorious predator priest.

“I couldn’t believe it. You were the one on the plane who told me, ‘No, that’s not the way it is, Father,’” Francis said.

Making a gesture that indicated his head had exploded, the pope continued: “That’s when the bomb went off, when I saw the corruption of many bishops in this.”

“There you witnessed that I myself had to wake up to cases that were all covered up, didn’t I?” he said.

More recently, he said he has been dealing with cases of “vulnerable adults” who were victims of sex abuse and whom the Vatican’s legal code considers to be minors in internal prosecutions. The Vatican in 2019 issued a broader definition for people it considered “vulnerable” that went beyond the previous description of merely someone who “habitually lacks the use of reason.”

Francis used that expanded definition in his comments to AP — and even went beyond it, saying there are several situations in which an adult might be considered vulnerable.

“I myself had to wake up to cases that were all covered up, didn’t I?”

Francis addressed two cases that garnered attention in the past year, including one involving a leader of East Timor’s independence movement, Bishop Carlos Ximenes Belo.

A Dutch magazine, De Groene Amsterdammer, reported in September that two people had accused Belo of sexually abusing them when they were boys in the 1990s. The magazine said there were others who hadn’t come forward.

After the report, the Vatican acknowledged that it had secretly sanctioned the Nobel laureate in 2020, after allegations arrived in Rome a year earlier, restricting his movements and ministry and prohibiting him from having contact with minors or visiting East Timor.

But at the time, the Vatican provided no information about whether Belo’s superiors knew earlier about any claims against him. And it provided no explanation as to why St. John Paul II allowed Belo to resign two decades early in 2002.

Belo has never responded to the allegations, and the Portuguese branch of his Salesian order, which is responsible for him, said it was unaware of the allegations when they first came up.

Suspicion arose that Belo, like others before him, had been allowed to quietly retire rather than face any reckoning, given the reputational harm to the church that would have caused.

In the interview Tuesday, Francis suggested that indeed was the case, reasoning that was how such matters were handled in the past.

“This is a very old thing where this awareness of today did not exist,” Francis said. “And when it came out (in September) about the bishop of East Timor, I said, ‘Yes, let it go in the open.’ ... I’m not going to cover it up. But these were decisions made 25 years ago when there wasn’t this awareness.”

The Rupnik scandal erupted in December after Italian blogs and websites reported claims by several women that Rupnik sexually, spiritually and psychologically abused them while they were living as consecrated women in a Jesuit-affiliated community he helped found in Slovenia in the 1990s.

The allegations rattled the Vatican and the Jesuits, since Rupnik—in the Catholic sphere—is a famous preacher and religious artist whose mosaics decorate chapels and basilicas around the globe. He preached at a Vatican retreat in 2020 and regularly leads spiritual exercises for priests and nuns, and his books remain prominently on sale at Vatican-area bookstores.

The Jesuits initially insisted there was a single allegation lodged against him in 2021 that the Vatican’s sex abuse office shelved because it was too old to prosecute. Under questioning, the Jesuits admitted that Rupnik had been declared excommunicated in 2020 for committing one of the most serious crimes in the church — using the confessional to absolve someone with whom he had engaged in sexual activity.

Francis added that he was shocked by the allegations against Rupnik, with whom he had reportedly been close.

The excommunication was lifted within a month of being declared. That unusually quick turnaround raised questions about whether Rupnik had received preferential treatment, especially when the following year the Vatican decided to not waive the statute of limitations when nine women filed complaints about his alleged abuse in Slovenia.

Francis denied he had any role in the handling of Rupnik’s case, other than to intervene procedurally to keep the second set of accusations from the nine women with the same tribunal that had heard the first.

Francis said his only decision was to “let it continue with the normal court, because, if not, procedural paths are divided and everything gets muddled up.”

He added: “So I had nothing to do with this.”

The case raised questions, including why the statute of limitations wasn’t waived, given the Vatican routinely makes such exceptions for abuse cases involving minors.

Francis acknowledged he “always” waives the statute of limitations for cases involving minors and “vulnerable adults,” but tends to insist on upholding traditional legal guarantees with cases involving others.

Using a Spanish term that implies a no-holds-barred approach, Francis said his approach was: “No loose reins with minors, the reins are pulled pretty tight.”

He added that he was shocked by the allegations against Rupnik, with whom he had reportedly been close.

“For me, it was a surprise, really. This, a person, an artist of this level — for me was a big surprise, and a wound.”

Francis said he wanted more transparency in how cases are handled, but he suggested it was an uphill battle in an institution that for centuries has handled predator priests behind closed doors.

“It’s what I want,” he said. “And with transparency comes a very nice thing, which is shame. Shame is a grace.”