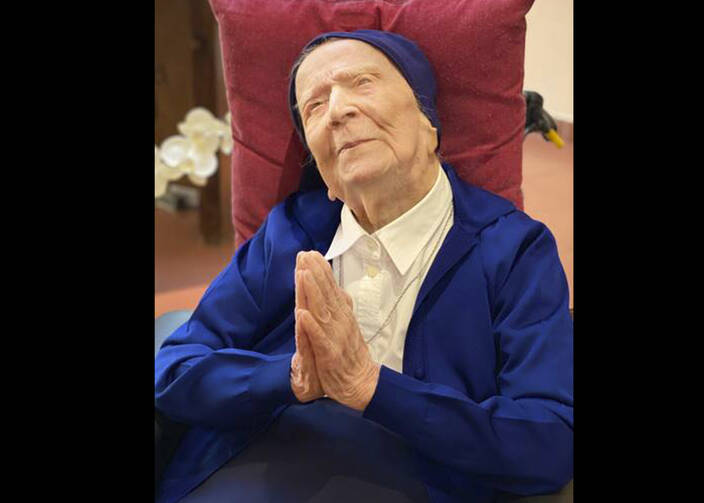 Sister André, a French Daughter of Charity who was the world's oldest known person, is pictured in an undated photo. Sister André died Jan. 17, 2023, at age 118 in a nursing home in Toulon, France. (OSV News photo/courtesy EHPAD Sainte Catherine Labouré)

“There is great sadness but ... it was her desire to join her beloved brother. For her, it’s a liberation,” David Tavella, speaking for the Sainte-Catherine-Labouré nursing home, told AFP.

Sister André, a Catholic convert raised in a Protestant family, was born Lucile Randon Feb. 11, 1904. It was 10 years before World War I, Theodore Roosevelt was president of the United States, New York opened its first subway line and U.S. Army engineers began work on the Panama Canal. She also lived through the 1918 Spanish flu pandemic and through 10 pontificates.

“People say that work kills. For me, work kept me alive.”

Sister André died Jan. 17 in her sleep at her nursing home in Toulon, on France’s Mediterranean coast, Tavella said.

An avid listener of Vatican Radio, the French nun sent well wishes to the radio operation on the occasion of its 90th anniversary in 2021. Sister Andre, who was blind, was a “dedicated listener of the radio that offers her a window of the world” and supports her prayer life, Vatican News reported Feb. 11, 2021.

In April 2022, she met reporters over tea in the house where she lived.

She was known to enjoy a daily glass of wine and chocolate.

Sister André used to say the biggest joy of her life was when two of her brothers returned home from World War I.

Material from the AP was used in the report.

OSV News
Show Comments ()
Join the conversation: Login or create an account
Before you can comment, you need to update your profile to include your first and last name, as required in our comments policy. Then reload this page and you'll be set up for commenting. Update your profile