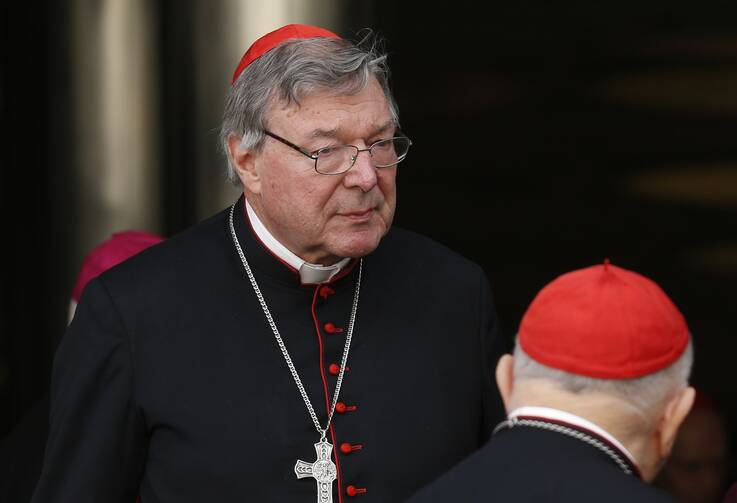 Cardinal George Pell is pictured during the extraordinary Synod of Bishops on the family at the Vatican in this Oct. 16, 2014, file photo. (CNS photo/Paul Haring)

Cardinal George Pell, 81, died in Rome on Jan. 10, the Vatican has confirmed. A leading Australian Catholic and close advisor to Pope Francis, the cardinal had participated in the funeral of his friend, Pope Benedict XVI, just last week.

His death came as a shock to many in Rome on Tuesday evening. He has suffered from heart problems for some time and had a pacemaker inserted in 2010. A former rugby player, he suffered hip problems in recent years and underwent surgery today.

On Wednesday, Pope Francis paid tribute to Cardinal Pell, praising his diligence in reforming the Vatican’s finances and his faith “even in the hour of trial.”

“This news comes as a great shock to all of us,” Sydney Catholic Archbishop Anthony Fisher said in a statement on Facebook. “Please pray for the repose of the soul of Cardinal Pell, for comfort and consolation for his family and for all of those who loved him and are grieving him at this time.”

On Wednesday, Pope Francis paid tribute to Cardinal Pell, praising his diligence in reforming the Vatican’s finances and his faith “even in the hour of trial.”

Francis sent a telegram of condolences to the head of the College of Cardinals, expressing his “sadness” over Pell's death and relaying his prayers and sympathy to the Australian prelate’s family.

Pell, the former archbishop of Melbourne and Sydney, became the third-highest ranked official in the Vatican after Pope Francis tapped him in 2014 to reform the Vatican’s notoriously opaque finances as the Holy See’s first-ever finance czar. He spent three years as prefect of the newly created Secretariat for the Economy, where he tried to impose international budgeting, accounting and transparency standards.

He has been living in Rome since his release from an Australian maximum security prison in 2020 after spending 404 days in solitary confinement after being wrongfully convicted in December 2018 on charges of the abuse of two altar boys in Melbourne in 1996.

His conviction was upheld by an appeals court in March 2019, but he always protested his innocence and was the first cardinal to be imprisoned on such charges. The full bench of Australia’s High Court unanimously squashed his conviction in 2020, and he decided to return to Rome, where he had previously served in various positions under Pope Francis.

A leading Australian Catholic and close advisor to Pope Francis, the cardinal had participated in the funeral of his friend, Pope Benedict XVI, just last week.

Pope Francis, who stood by Cardinal Pell during his trials, welcomed him back to the Vatican. During his time in prison, Pell kept a diary documenting everything from his prayers and Scripture readings to his conversations with visiting chaplains and the prison guards. The journal turned into a triptych, “Prison Journal,” the proceeds of which went to pay his substantial legal bills.

In the diary, Pell reflected on the nature of suffering, Pope Francis’ papacy and the humiliations of solitary confinement as he battled to clear his name for a crime he insists he never committed.

Born in Ballarat, Victoria state in 1941, he studied theology at the Pontifical Urban University in Rome and was ordained a priest in 1966. He subsequently obtained a master’s degree in education from the University of Melbourne, and a doctorate in philosophy on the history of the church from Oxford University.

Soon after his election in March 2013, Pope Francis named Cardinal Pell to his council of nine cardinal advisors and in 2014 appointed him as the first prefect of the newly-created Secretariat for the Economy, as part of his effort to reform Vatican finances. In that role, he brought about major reforms in Vatican finances by 2017, despite considerable internal opposition from many in the Vatican, but he had to leave the post in 2017 to return to Australia to defend himself against the abuse charges. His term as prefect ended in 2019 while he was in prison.

He was the leading Australian churchman for many years, a powerful speaker, an able writer and a formidable debater who held strongly traditionalist views and clashed with not a few people during his life. But he never lost the confidence of Pope Francis, who last year praised Cardinal Pell’s “genius” in bringing greater transparency to Vatican finances.

“It was Pell who laid out how we could go forward. He’s a great man and we owe him so much,” Francis said last month.

This story has been updated with further reporting from the Associated Press.