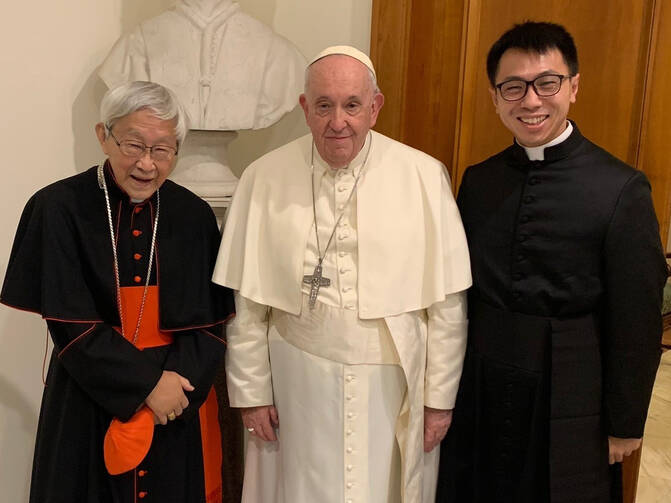 Pope Francis received Cardinal Joseph Zen Ze-Kiun of Hong Kong in private audience at 3:30 p.m. on Jan. 6, at Santa Marta, the pope’s residence in the Vatican.

“It was wonderful. He was so very warm!,” the overjoyed 90-year-old cardinal told America soon after the audience.

The Chinese-born cardinal had obtained special permission from a Hong Kong court only a few days earlier, on Jan. 3, to attend Benedict’s funeral on Jan. 5. The court ordered that he be given back his passport for five days only, just for this purpose. Last May, the police had confiscated the passport when they arrested the cardinal, along with five others, over a fund on which they had served as trustees. The fund had provided legal and medical care to pro-democracy protestors who were arrested following the 2019 protests in Hong Kong. The cardinal and the others were convicted last November for failing to register the fund, but they have since appealed the conviction.

“It was wonderful. He was so very warm!,” the overjoyed 90-year-old cardinal told America soon after the audience.

Once he had regained his passport, Cardinal Zen took the plane to Rome the very next day, accompanied by a young Salesian confrere, the Rev. Carlos Cheung. They traveled via Doha and arrived at Rome airport at 6 a.m. on Jan. 5, the day of the funeral, and made it to the Vatican just in time to take part in the requiem Mass in St. Peter’s Square. The cardinal briefly greeted the pope in the sacristy as he and the other cardinals vested before the Mass.

Today’s audience, however, was something special: a personal, private audience granted by the pope to him at short notice because the cardinal has to take the plane back to Hong Kong tomorrow morning (Jan. 7) to respect the court order.

The last time Cardinal Zen was in Rome, in 2020, he had not been able to meet the pope in private, and many observers have since listed him among the adversaries of Francis because of Cardinal Zen’s strong criticism of the provisional agreement on the nomination of bishops that the Holy See signed with China in September 2018 and renewed again last October.

Today’s audience, however, reveals that there is a deeper bond of faith and friendliness between the Hong Kong cardinal and the Argentine pope than many realize, even if they are not on the same page over the provisional agreement and some other issues. The two church leaders first got to know each other on a post-synodal council, where the Chinese cardinal concluded that his Argentine colleague in the College of Cardinals was “very pastoral.” Later, as I recount in my book on The Election of Pope Francis, Cardinal Zen and then-Cardinal Bergoglio sat alongside each other in the Clementine Hall, chatting freely, on Feb. 28, 2013, before Benedict XVI arrived to give his farewell speech to the College of Cardinals. The cardinal later told me that Cardinal Bergoglio was among the five candidates he thought could succeed Benedict. Since Francis became pope, he has received Cardinal Zen in several private audiences, today’s being but the latest.

Today’s audience reveals that there is a deeper bond of faith and friendliness between the Hong Kong cardinal and the Argentine pope than many realize.

Cardinal Zen told America that Francis first warmly welcomed him in a parlor on the ground floor of Santa Marta. They sat there for some time and conversed together in a friendly way. While respecting confidential aspects of their conversation, the cardinal said he felt free to reveal two things he told the pope. First, he thanked Francis for giving Hong Kong “a good bishop,” Stephen Chow, S.J., who was appointed in 2021. He recalled that Francis smiled at hearing this and quipped, “He’s a Jesuit!”

Second, he told the pope about his pastoral ministry visiting prisoners in Hong Kong’s jails, a work he has been doing for over 10 years. He also told him that he has baptized a number of prisoners in these years, when they requested the sacrament. He said Francis was “very happy” to hear of this pastoral ministry that the elderly cardinal—who has to walk with the aid of a cane—continues to do even to this day.

After conversing for some time in the parlor, the cardinal said Pope Francis invited him and Father Carlos to come upstairs to his private apartment, and there he gave them gifts of books and rosary beads.

Before today’s audience, the cardinal said he was allowed to visit and pray at the tomb of Benedict XVI in the crypt of St. Peter’s Basilica.

The cardinal revealed that while they were in the pope’s apartment, Francis showed him the copy of the statue of Our Lady of Sheshan that he was given on his election, which he had placed in his room. The original stands atop the church at the famous Marian shrine of Sheshan, which is a pilgrimage site for many Chinese Catholics and stands on the outskirts of Shanghai, the city where the cardinal was born.

On seeing the statue, the cardinal told Francis, “I hope you can one day visit the shrine of Sheshan!”

The cardinal said the pope was in great form throughout the audience and full of good humor and even insisted on accompanying him and his companion to the door as they departed. Francis joked and laughingly explained this, saying, “I accompany you for two reasons: I want to make sure you go; and secondly, I want to make sure that you do not take anything with you!” They all laughed, and Francis waved goodbye.

Before today’s audience, the cardinal said he was allowed to visit and pray at the tomb of Benedict XVI in the crypt of St. Peter’s Basilica.

Pope Benedict made Joseph Zen a cardinal in 2006, and Zen worked closely with Benedict XVI throughout his pontificate on the question of the situation of the church in China and the suffering of China’s 12 million Catholics, caused by the political impositions of the communist authorities.

On Saturday morning, Cardinal Zen will make the long flight back to Hong Kong with happiness in his heart because he has been able to attend the funeral of Benedict, pray at his tomb and have a warm private audience with Pope Francis.