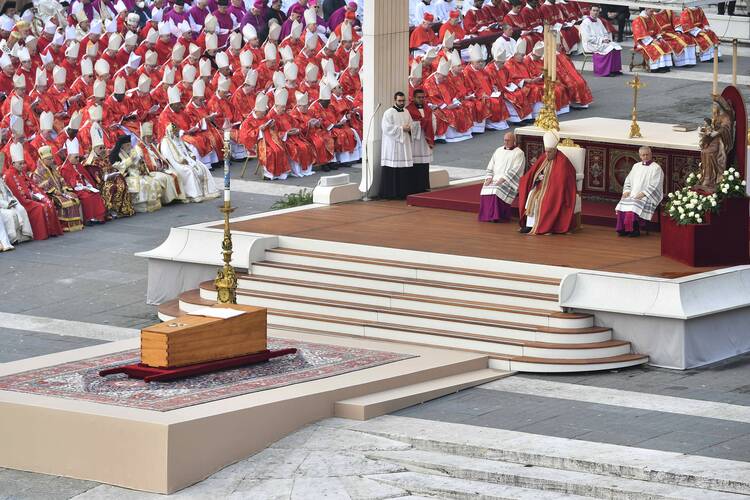 Cardinal Giovanni Battista Re sprinkles holy water on the casket of Pope Benedict XVI as Pope Francis looks on during the late pope's funeral Mass in St. Peter's Square at the Vatican Jan. 5, 2023. (CNS photo/Vatican Media)

The bells tolled, the organ played, and the congregation of 50,000 Romans and pilgrims from Germany, Italy and many other countries applauded warmly as pallbearers brought the casket of Benedict XVI, the emeritus pope who died on Dec. 31, onto the steps of St. Peter’s Basilica.

The simple cypress coffin, with Benedict’s coat of arms emblazoned on it, was placed in front of the altar looking out on the square, on this cool, misty morning of Jan. 5.

A small ceremony had taken place in the basilica the previous evening when Benedict’s corpse was placed in the coffin. A 1,000-word resume of his life (known in Latin as his rogito), was then read and subsequently inserted into a metal tube and placed in the coffin, together with the pallium and a collection of the coins of his pontificate. These items were to be buried with him, as is the tradition for the burial of popes.

The bells tolled, the organ played, and the congregation of 50,000 Romans and pilgrims applauded warmly as pallbearers brought the casket of Pope Benedict XVI onto the steps of St. Peter’s Basilica.

The following morning, once the pallbearers placed the casket on the steps in front of the altar, an open book of the Gospels was placed on it. The people then joined in reciting the sorrowful mysteries of the rosary.

When the rosary ended, Pope Francis, 86, arrived in a wheelchair and took his place on a chair in front of the altar, looking out at the coffin.

Next 125 cardinals processed out from the basilica and took their seats at the right-hand side of the altar. Cardinal Zen, who had arrived from Hong Kong early this morning, made it just in time.

[The Editors: Pope Benedict is a model of grace and humility for his successors]

All the cardinals concelebrated the solemn, sung Latin Mass together with 400 other bishops and 3,700 priests from all continents.

The two official delegations from Germany and Italy sat on the left of the altar together with the presidents of Hungary, Poland, Portugal, Slovenia, Lithuania and Togo, and three monarchs from Spain and Belgium, as well as other guests who had come in their private capacity. Seated at the end of the front row was Archbishop Georg Gänswein, who had served Benedict as private secretary throughout his eight-year-pontificate and almost 10 years of retirement, together with the four consecrated women of the Memores Domini, the two nurses and others who had cared for Benedict over these years.

All the cardinals concelebrated the solemn, sung Latin Mass together with 400 other bishops and 3,700 priests from all continents.

Pope Francis, wearing a red cope, began the liturgy with the sign of the cross and the words “Peace be with you!” After the readings of the Scriptures in Spanish, English and Italian, he delivered a profoundly spiritual reflection starting from the Gospel (Lk 23:29-46), in which Jesus on the cross said, “Father, into your hands I commend my spirit.”

Francis recalled: “These were the final words spoken by the Lord on the cross, his last breath, as it were, which summed up what had been his entire life: a ceaseless self-entrustment into the hands of his Father.”

Instead of delivering a eulogy, as many people had expected, Pope Francis said those words are “the invitation and the program of life that he [Jesus] quietly inspires in us” and with which “he wishes to shape the heart of every pastor.”

He went on to paint a portrait of the pastor that Jesus desires, suggesting that this was in fact the kind of pastor that Benedict had been. He recalled that Jesus “entrusts himself to the frail hands of his disciples, so that they can feed his people,” through “prayerful devotion, silently shaped and refined amid the challenges and resistance that every pastor must face.” He said that “like the Master, a shepherd bears the burden of interceding and the strain of anointing his people, especially in situations where goodness must struggle to prevail and the dignity of our brothers and sisters is threatened.”

“The Lord quietly bestows the spirit of meekness that is ready to understand, accept, hope and risk, notwithstanding any misunderstandings that might result.”

Furthermore, he said, “the Lord quietly bestows the spirit of meekness that is ready to understand, accept, hope and risk, notwithstanding any misunderstandings that might result. It is the source of an unseen and elusive fruitfulness, born of his knowing the One in whom he has placed his trust.”

Pope Francis told the 50,000 persons present in St. Peter’s Square and the millions of people around the world who were following the funeral service by television or social media:

Holding fast to the Lord’s last words and to the witness of his entire life, we, too, as an ecclesial community, want to follow in his steps and to commend our brother into the hands of the Father. May those merciful hands find his lamp alight with the oil of the Gospel that he spread and testified to for his entire life (cf. Mt 25:6-7).

Then, referring to Benedict without naming him, Francis said:

God’s faithful people, gathered here, now accompanies and entrusts to him the life of the one who was their pastor. Like the women at the tomb, we, too, have come with the fragrance of gratitude and the balm of hope, in order to show him once more the love that is undying. We want to do this with the same wisdom, tenderness and devotion that he bestowed upon us over the years. Together, we want to say: “Father, into your hands we commend his spirit.”

Then, for the only time in the homily, Francis named his predecessor as he concluded with these words full of hope: “Benedict, faithful friend of the Bridegroom, may your joy be complete as you hear his voice, now and forever!”

After the homily, the prayers of the faithful were read, beginning with one in German: “For Pope Emeritus Benedict, who has fallen asleep in the Lord: may the eternal shepherd receive him into his kingdom of light and peace.”

[A timeline of Pope Benedict XVI’s life and papacy: From humble beginnings to historic resignation]

Cardinal Giovanni Battista Re, 88, the dean of the College of Cardinals, then led the celebration of the Eucharist at the altar at which the Sistine Choir sang, while Francis sat at the side of the altar. The cardinal was assisted by the college’s vice dean, the Argentine-born Cardinal Leonardo Sandri, and by Cardinal Francis Arinze (the next most senior cardinal), who had returned from his holiday in Nigeria for the funeral.

By the end of the Mass, the mist had lifted, the sky had turned blue, as Pope Francis imparted the final commendation and farewell. He entrusted his predecessor to “God our merciful Father” and prayed that through Jesus Christ and in the Holy Spirit, he “may deliver Pope Emeritus Benedict from death, that he may sing God’s praises in the heavenly Jerusalem, in expectation of the resurrection of his mortal body on the last day.” He prayed, too, that through the intercession of Mary, God “may reveal the face of Jesus his Son to Pope Emeritus Benedict and console the church on her pilgrimage through history as she awaits the Lord’s return.”

“Benedict, faithful friend of the Bridegroom, may your joy be complete as you hear his voice, now and forever!”

The cardinal dean then blessed the casket with holy water and incensed it. As he finished, the choir sang “In Paradisum deducant te Angeli…” (“May the Angels lead you into Paradise…”). At that stage, all the cardinals moved into the basilica to be there before the casket arrived.

Ten pallbearers then lifted the coffin, and Francis put his right hand on it, in a final gesture of fond farewell, before they carried it away for burial in the crypt of the basilica in what had served as the temporary resting place of John XXIII and later of John Paul II. (Their remains were transferred to the basilica following each one’s beatification.)

As the pallbearers carried the casket away into the basilica, everyone in the square—bishops, priests, religious, lay faithful and dignitaries—applauded warmly in gratitude for Benedict’s great service to the church and humanity.

A small group of people held up a sign calling for “Santo Subito”—meaning make him “a saint immediately”—but it seemed a feeble gesture compared to the similar display at John Paul II’s funeral in 2005.

Once the casket arrived in the crypt, it was placed first in a zinc coffin and then in a second, outer coffin made of elm wood, in accordance with the tradition for the burial of popes. Benedict’s remains, secure in these three coffins, were then interred in the tomb of his predecessors.

Thus ended a historic and unprecedented funeral of an emeritus pope—the first of its kind—in the Vatican.