The Editors: Pope Benedict is a model of grace and humility for his successors 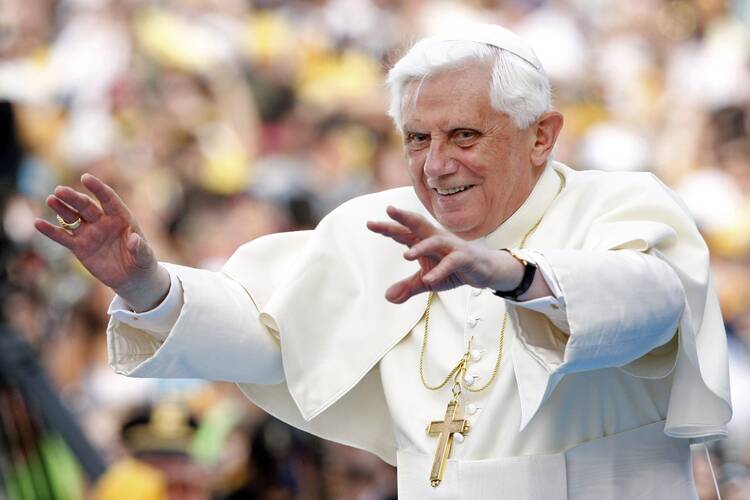 Pope Benedict XVI is pictured in a 2008 file photo. (CNS photo/Gregory A. Shemitz)

After the death of Pope Emeritus Benedict XVI, the church mourns a dedicated pastor whose papal witness, especially his courageous final act as pope, stands as a model of grace and humility for his successors.

It was a papacy few would have predicted in Benedict’s life before he became pontiff. Scholarly popes are relatively rare—the papal office requires a pastor-administrator more than a priest-professor—and for most of his life Joseph Ratzinger was the latter. He had quickly established himself during and after the Second Vatican Council as one of the most respected and influential theologians of the late 20th century. His Introduction to Christianity, published in 1968, still stands as the best single-volume account of our faith. In the wake of Vatican II, where he had served as a theological advisor to the council fathers, Father Ratzinger joined with some of the greatest European Catholic scholars of his generation to found Communio, a prominent and influential theological journal. His extensive literary output extended into his papacy and included three timely and eloquent encyclicals, as well as three best-selling books about Jesus of Nazareth.

Despite his own misgivings about his talents for governance and administration, Father Ratzinger also served as vice president of the University of Regensburg in 1976-1977, and as archbishop of Munich and Freising from 1977 to 1982. That year, Pope John Paul II called him to Rome to be prefect of the Congregation for the Doctrine of the Faith, a position he would hold for 24 eventful years, during which time he sought to clarify the doctrinal boundaries of theological thought which John Paul II and Cardinal Ratzinger believed had become blurred in the years following Vatican II.

On the occasion of his passing, we give thanks to God for this shy, brilliant scholar and pastor who was led reluctantly into a larger-than-life role.

During Cardinal Ratzinger’s more than two decades as the church’s principal doctrinal enforcer, the editors of America sometimes found reasons to disagree with his opinions and with the pronouncements of the Vatican office he led. (It is safe to say he found reasons to disagree with America as well.) Cardinal Ratzinger was a distinguished interlocutor in those days, but also an aggressive and self-assured one, and more than a few theologians found their scholarship restricted or their work subject to years of investigation and censorship. America was itself the object of such scrutiny. The resignation of Thomas J. Reese, S.J., as editor in chief in 2005 resulted from Cardinal Ratzinger’s disapproval of America’s editorial direction.

After his election as Pope Benedict XVI, many theologians and members of the Catholic press in the United States feared that this doctrinal policing would only intensify. Benedict’s tenure as pope, however, revealed a different dimension of his personality. The demands and the grace of his new office challenged him to overcome his natural introversion and his shyness before crowds. As pope he demonstrated that he had a pastor’s heart and a grandfatherly gentleness, which came as a surprise to some who had known him only as “God’s Rottweiler.” He was also a skilled preacher, emphasizing the essential relationship between faith and reason, but also stressing time and again that discipleship is fundamentally personal, involving a deep and abiding friendship with God.

At the time of his election, Benedict XVI was the oldest man to ascend the throne of Peter in three centuries and he was already beginning to experience the physical travails of old age. Nevertheless, he traveled widely as pope and was generous with his time during his many international trips. His visit to the United States in 2008 was a signal moment for American Catholics, as they watched the intelligence, dignity and sheer stamina with which he undertook an intense program of engagements that would have exhausted even a younger pontiff.

Benedict’s papacy was not without its troubles. He faced pervasive corruption in the Vatican which he was unable to reform. Pope Benedict himself seemed to recognize at times that the governance of the Vatican, a sclerotic and unwieldy bureaucracy, was beyond his natural capabilities as an administrator. While he moved much more decisively than John Paul II to respond to the crisis of clerical sexual abuse, including removing the disgraced Marcial Maciel from active ministry, there was also a widespread perception that the Vatican’s approach to the sexual abuse crisis seemed more concerned with the church’s reputation than with the well-being of survivors. And there was also the occasional public gaffe: His well-intentioned but ill-received address in Regensburg in 2006 angered many Muslims and hampered the church’s interfaith efforts.

As pope he demonstrated that he had a pastor’s heart and a grandfatherly gentleness, which came as a surprise to some who had known him only as “God’s Rottweiler.”

Curiously, Pope Benedict’s great moment of public “weakness”—his admission at the time of his resignation in February 2013 that he was no longer physically capable of doing the job—was also his greatest moment of strength and a lasting gift to the church. It was a stunning historical development, one that required great wisdom and courage, as he asked “pardon for my defects” and told the world that his “strengths, due to an advanced age, are no longer suited to an adequate exercise of the Petrine ministry.”

“[I]n today’s world,” he wrote in his letter of resignation, “subject to so many rapid changes and shaken by questions of deep relevance for the life of faith, in order to govern the barque of Saint Peter and proclaim the Gospel, both strength of mind and body are necessary, strength which in the last few months has deteriorated in me to the extent that I have had to recognize my incapacity to adequately fulfill the ministry entrusted to me.”

There are few examples either in history or in the present day of a powerful leader voluntarily surrendering his or her authority. Benedict’s reasoning was simple and unassailable: Someone else could meet the demands of his ministry better than he. The pope’s resignation, then, was a powerful witness to his character and discipleship, to the depth of his humility and to his deep respect for the central importance of the Petrine office. No one person stands above the body of Christ, his actions said, even in a church that often holds up the pope as a larger-than-life figure.

On the occasion of his passing, we give thanks to God for this shy, brilliant scholar and pastor who was led reluctantly into a larger-than-life role. We are grateful for his service and his example. In the years ahead, accounting for all the lights and shadows of his long and eventful life, Catholics will affectionately remember Pope Benedict XVI in just the way he described himself upon his election to the papacy: “a simple, humble laborer in the vineyard of the Lord.” R.I.P.