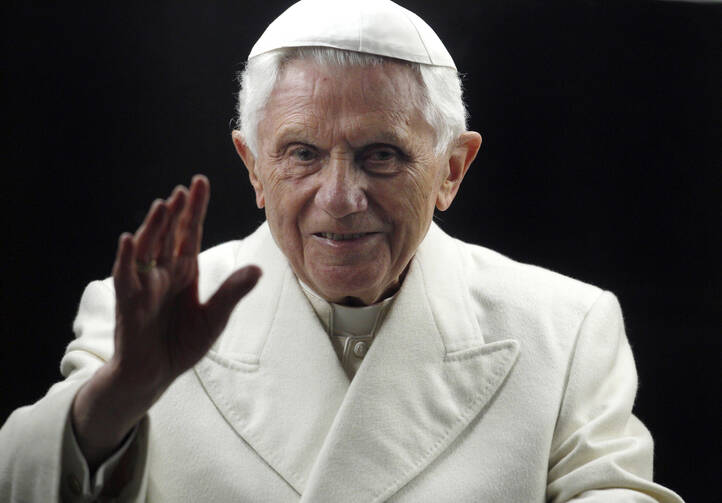 Pope Benedict XVI blesses the faithful as he arrives in St. Peter's Square at the Vatican to bless the nativity scene on Dec. 31, 2011. Pope Emeritus Benedict XVI, the German theologian who will be remembered as the first pope in 600 years to resign, has died, the Vatican announced Saturday. He was 95. (AP Photo/Pier Paolo Cito, File)

“Jesus, ich liebe dich!” Jesus, I love you. These were the final words that Pope Emeritus Benedict XVI uttered before he died, a powerful final expression of love and faith.

The news was first reported by Elisabetta Piqué (my wife), the Rome correspondent, in La Nación, the Argentine daily, which published it online this evening.

Immediately after Benedict had died, the German Archbishop Georg Gänswein, Benedict’s private secretary, phoned Pope Francis to inform him of the former pope’s death. Francis arrived by car at the Mater Ecclesiae Monastery 10 minutes later; he was the first person to arrive at Benedict’s deathbed and, once there, he imparted a final blessing to him and prayed in silence for some minutes besides his body.

These were the final words that Pope Emeritus Benedict XVI uttered before he died, a powerful final expression of love and faith.

He also expressed his condolences to those present: Archbishop Gänswein; the four consecrated women of Memores Domini—Carmela, Loredana, Cristina and Rossella, who have cared for Benedict since his resignation in 2013; Benedict’s German secretary, Sister Birgit Wansing, and two nurses. Francis then told Archbishop Gänswein to make the news of his death public.

This evening, New Year’s Eve, Pope Francis presided at the traditional end of the year celebration of vespers followed by the recitation of the "Te Deum," the church’s solemn chant of thanksgiving, in St. Peter’s Basilica, which was attended by many cardinals, bishops and thousands of pilgrims and Romans.

Speaking for the first time since the death of his predecessor, Pope Francis in his homily remembered Benedict XVI. Francis recalled his predecessor’s great kindness and witness of prayer.

“Speaking of kindness,” he said, “at this moment, my thought naturally goes to dear Pope Emeritus Benedict XVI who left us this morning. We are moved as we recall him, such a noble person, so kind. And we feel such gratitude in our hearts: gratitude to God for having given him to the Church and to the world; gratitude to him for all the good he accomplished, and above all, for his witness of faith and prayer, especially in these last years of his recollected life. Only God knows the value and the power of his intercession, of the sacrifices he offered for the good of the Church.”