Scroll buried with Pope Benedict sums up his life and ministry in just 1,000 words 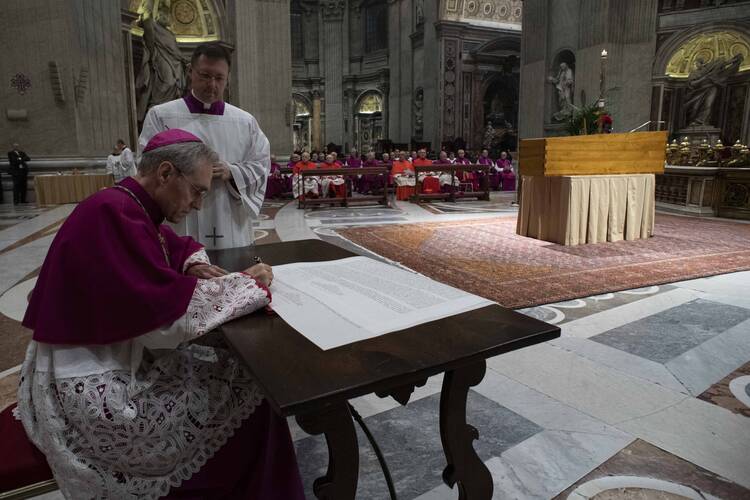 Archbishop Georg Gänswein, private secretary to Pope Benedict, signs a scroll known as a "rogito" to place with the body of Pope Benedict XVI in his cypress casket in St. Peter's Basilica at the Vatican Jan. 4, 2023. In addition to containing his biography, the legal document, written in Latin, also attested to his death and burial. (CNS photo/Vatican Media)

VATICAN CITY (CNS)—Pope Benedict XVI was a renowned theologian, a “recognized authority,” who left “a rich legacy of studies and research on the fundamental truths of the faith,” said the official summary of his life and papacy.

The 1,000-word text, known as a “rogito,” was rolled up, slipped into a metal cylinder and placed with his body in a cypress casket late Jan. 4 after an estimated 195,000 people had passed by his body in St. Peter’s Square to pay their respects.

The text, released in Latin and Italian shortly before the pope’s funeral Mass Jan. 5, highlighted his work as a theologian, his ecumenical outreach, his relations with the Jewish community and his efforts to deal with the clerical sexual abuse scandal.

The short biography about his birth, childhood and education also noted that “the time of his youth was not easy. His family’s faith and his upbringing prepared him for the difficult experience of the problems associated with the Nazi regime, knowing the climate of strong hostility toward the Catholic Church in Germany.”

“Benedict XVI placed the theme of God and faith at the center of his pontificate in a continuous search for the face of the Lord Jesus Christ.”

However, it said, “in this complex situation, he discovered the beauty and truth of faith in Christ.”

The text spoke of his ordination and his career as a professor of theology and noted his role as a “peritus” or theological adviser at the Second Vatican Council, his appointment as archbishop of Munich and Freising in 1977 and his creation as a cardinal by St. Paul VI later that same year.

Elected St. John Paul’s successor April 19, 2005, it said, “he presented himself as ‘a humble worker in the vineyard of the Lord’” when he greeted the crowds from the central balcony of St. Peter’s Basilica.

“He successfully promoted dialogue with Anglicans, Jews and representatives of other religions, as well as resumed contacts with the priests of the St. Pius X community.”

“Benedict XVI placed the theme of God and faith at the center of his pontificate in a continuous search for the face of the Lord Jesus Christ,” the text said. He tried to help “everyone to know him, particularly through the publication of the three-volume work ‘Jesus of Nazareth.’”

“Endowed with vast and profound biblical and theological knowledge, he had the extraordinary ability to elaborate enlightening syntheses on major doctrinal and spiritual themes, as well as on crucial issues in the life of the church and contemporary culture,” the rogito continued.

Turning to his efforts at dialogue, the document said that “he successfully promoted dialogue with Anglicans, Jews and representatives of other religions, as well as resumed contacts with the priests of the St. Pius X community.”

The mention of Anglicans seemed to refer to initial tensions and then a resumption of dialogue after Pope Benedict made special pastoral provisions for Catholics coming from the Anglican tradition, establishing in 2009 personal ordinariates, jurisdictions similar to dioceses, which recognize their full communion with Rome while preserving some of their Anglican heritage.

“He firmly fought against crimes committed by members of the clergy against minors and vulnerable people, continually calling the church to conversion, prayer, penance and purification.”

The “resumed contacts with the priests of the St. Pius X community,” referred to the traditionalist Society of St. Pius X and other Catholics attached to the “extraordinary” or pre-Vatican II form of the Mass. Pope Benedict lifted the excommunications of four of the society’s bishops who were ordained illicitly in 1988 and launched a long and intense dialogue with the group.

Pope Benedict’s papal teaching, in encyclicals, apostolic exhortations, catechesis at his general audiences and speeches and homilies “delivered during his 24 apostolic journeys around the world” also were mentioned.

“In the face of increasingly rampant relativism and practical atheism,” it said, he established the Pontifical Council for the Promotion of the New Evangelization in 2010.

And, the document said, “he firmly fought against crimes committed by members of the clergy against minors and vulnerable people, continually calling the church to conversion, prayer, penance and purification.”

Pope Benedict was the first pope in some 600 years to resign.

The rogito included the complete text he read in Latin Feb. 11, 2013, when he announced at an ordinary consistory of cardinals that he was stepping down. He had explained that “in order to govern the bark of St. Peter and proclaim the Gospel, both strength of mind and body are necessary, strength which in the last few months has deteriorated in me to the extent that I have had to recognize my incapacity to adequately fulfill the ministry entrusted to me.”