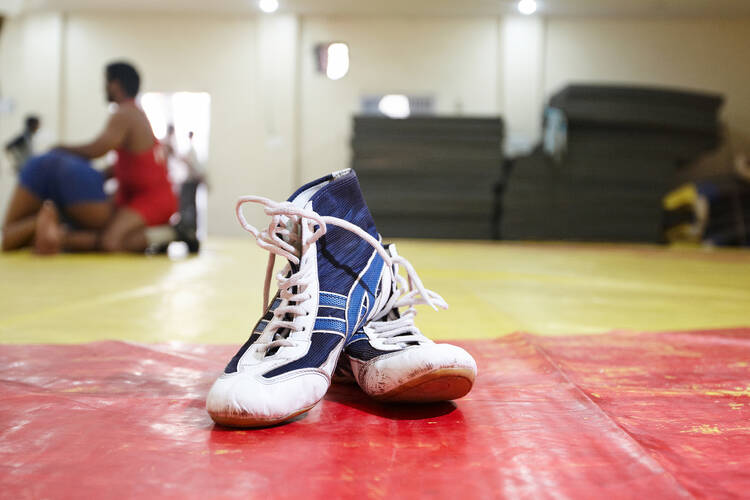 The first wrestling meet I ever went to was at a high school in rural South Dakota where I used to teach English. It was the school’s invitational, and I had been assigned to sell refreshments. While I was dishing out lukewarm nacho cheese and purple Laffy Taffy at the east end of the field house lobby, I caught glimpses of the action inside.

On large blue mats spread out over the basketball court, two matches were going at the same time, about 50 feet from each other. At the match closest to me the referee was leaning over and watching the boys struggle on the mat. Holding onto his shirt was a young girl carrying a stuffed animal, a kind of elongated white creature. As the action went on she looked vacantly up and away.

What was happening out there?, I wondered. Why was there an 11-year-old kid holding onto the ref in the middle of a wrestling match? Why would they let someone get underfoot like that while he was trying to do his job?

It quickly dawned on me, it must be the referee’s daughter, and she a girl with some kind of special need. For whatever reasons, she simply needed her father’s constant touch. No matter where he was. Even if he was in the middle of officiating a wrestling match. For one with her condition, it was not enough simply to know that, in general, her father was there for her. She needed proof, specifically, every second by holding onto him—even as he paid her no attention.

Or perhaps the need was not even purely hers. Maybe this girl’s condition had so acutely attuned her to other people’s needs that she made sure this decisive, exposed man literally felt the presence of his daughter every second that went by. Maybe she was, in a way, taking care of him. Watching this take place as I stood there behind the counter, I admit I got a bit choked up.

If you would have asked me ahead of time, my hunch—fair or not—would have been that a gymnasium filled with wrestlers’ parents and fans, particularly in the western reaches of rural South Dakota, would not have a lot of empathy and patience for needy little creatures threatening to disrupt their earnest games. But the crowd watching on this weekend morning did not even seem to notice this girl. They didn’t seem to think it was strange that she was standing there, one hand on her dad’s back, the boys straining against each other just a few feet away.

Every so often she would whack her father with the stuffed animal, an involuntary reaction of some kind, or maybe a display of affection this girl and her dad had developed over time. When the matches ended, the girl would wander away from her father, stroll around the mat, go sit in the stands. But always, as the meet rolled on, she would come back to her dad and affix herself again to him. To nurse from him, as it were, through a simple hand on the back.

The crowd in the stands, by not paying attention to this, by not really giving the girl much of a second glance, completely affirmed her being there. They probably had seen her before at previous meets and silently made her a part of the landscape of high school wrestling; heavy mats, wiry boys, red and green ankle bands, team t-shirts that insisted the more you sweat in practice the less you bleed in battle—and this precious girl.

I moved back to the popcorn dispenser, poured in more oil, quite emotional about the whole thing and feeling, blessed by what I saw: the girl, her father, the aching beauty of the whole scene, here in a gym tucked in the pines and dust along Highway 18 in the middle of America.

Then I noticed, in the other wrestling circle farther from me, another girl. She, too, was holding onto the referee of that match, clutching a long white stuffed animal and staring into space. And every so often she also tapped her ref.

Always, as the meet rolled on, she would come back to her dad and affix herself again to him.

I looked again at these 11-year-olds. Then I saw what they were staring at: The scoreboard clocks on either side of the gym. When a clock wound down to zero, the girl staring at it tapped the ref on the back, and he ended the period. In an instant it was clear. The referee could not watch the clock and keep his eyes on the boys at the same time. So he needed some other way to know when the period was over. A buzzer would not work because both sets of wrestlers would hear it and think their match was over, when inevitably one had longer to go. So the girls were assigned to tap the refs, and not with stuffed animals, but rolled-up white towels. These were not mentally challenged kids. They were timekeepers.

In a flash the whole illusion had withered, died, crumpled to the ground. I had nothing. I did not like it this way, the kids as everyday, run-of-the-mill timekeepers. I was disappointed.

When there was a break in the matches, both girls came over to the concession stand and asked for Pepsis, which for their labors they got for free. I looked at the girl who I had seen first. She had no special needs beyond a soda pop, just a quiet, polite 11-year-old. She had no idea who she had been for me just an hour before; that she had taken on the form of something so rare, so bedeviling: a wandering, needy figure slotted into, and gently breaking open, the tidy ceremonies of strong American boys fighting each other. She did not know this. She couldn’t have.

I gave both girls their Pepsis. They told me that they had been drafted into their jobs when they showed up to watch their older brothers compete. They hung out in the lobby for a few minutes, then went back to their work. I watched them again, and now it was very clear what they were doing. They swatted the ref with the towel, he blew his whistle, the boys stopped and untangled themselves from each other. How could I not have seen it?

I don’t know the answer to that. But I do know that I would be lying if I said I didn’t want her back, the girl as she’d been before. The girl who was clinging, or being clung to. Being saved and saving.

Who would not want someone like that around them? Someone holding onto you, loosely but always. Someone there as you struggle to count points in the middle of a private war you’ve found yourself in. And you knowing with the plain certainty of a helpless mystic that no matter where you are and what you face, you are never, ever alone.