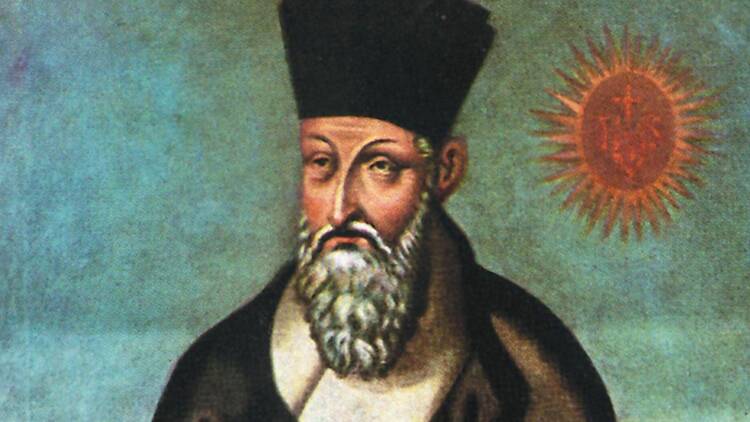 Recognizing that Matteo Ricci “lived the Christian virtues to a heroic degree,” Pope Francis has officially put the famous 16th-century Italian Jesuit missionary to China on the path to sainthood.

On Dec. 17, the Vatican announced that the pope has authorized Cardinal Marcello Semeraro, the prefect of the Vatican Dicastery for the Causes of the Saints, to promulgate a degree recognizing “the heroic virtues of the Servant of God, Matteo Ricci, a professed priest of the Society of Jesus, [who was] born at Macerata, Italy, on Oct. 6, 1552, and died in Peking [now Beijing], China, on May 11, 1610.”

Pope Francis described Father Ricci as "a man of encounters, who went beyond being a foreigner and became a citizen of the world.”

Pope Francis is known to be inspired by Father Ricci, and the decree comes on the pope’s 86th birthday today. The Vatican’s announcement is also an important one for the Catholic Church in China and its 12 million members.

In a meeting last May with a delegation from the University of Macerata, Pope Francis described Father Ricci as a “champion” of the “culture of dialogue.” He said, the Jesuit missionary is famed not only for his actions and his writings, but for being "a man of encounters, who went beyond being a foreigner and became a citizen of the world.”

Father Ricci began his missionary work in China in 1582 when he arrived in Macau, then a Portuguese colony. Moving to mainland China, where he adopted the Chinese style of life and became fluent in the Chinese language, he spent the remaining 27 years of his life in China.

Father Ricci made history in 1601 by becoming the first European to enter China’s Forbidden City in Peking (now Beijing); the Wanli Emperor of China’s Ming dynasty had invited him because of his knowledge of astronomy and calendrical science. Known as “​​Li Madou” to the Chinese, Father Ricci produced scholarly works in optics, astronomy, music, geography, geometry and numerous other fields.

Father Ricci subsequently converted several prominent Chinese officials to Christianity, including Xu Guangqi, a Chinese scholar and a high-ranking official in the Chinese government. Xu Guangqi’s cause for sainthood is also under consideration and had been hoped to be announced together with the cause of Father Ricci, but that was not possible due to the difficulty of getting access to the necessary documentation in the Diocese of Shanghai.

Father Ricci cooperated together with Xu Guangqi and others in translating Western classics like Euclid’s Elements into Chinese and translating important Confucian texts into Latin. In an unprecedented honor, at his death he became the first Westerner to be buried in Imperial Ground in the capital city by a special decree of the Chinese emperor. (Previously, all foreigners who died in China were taken to Macau for burial). His grave is in the Zhalan Cemetery on the grounds of the Beijing Administrative College, previously the Beijing Communist Party School.

The Chinese recognize Father Ricci as a bridge builder between the East and the West, and have honored him by commemorating him in the Millenium Monument in Beijing, the only other Westerner so honored is Marco Polo.

The diocesan phase of Father Ricci’s cause was opened in 1984. Documentation attesting to his achievements and personal holiness was collected and sent to the Vatican’s congregation (now dicastery) for the causes of the saints in 2014. In Rome, the postulator of the cause prepared what is known as the “positio,” a summary of the documentary evidence from the diocesan phase that aims to prove that Ricci lived the Christian life and virtues in a heroic way. The Christian virtues are of two kinds: the “cardinal” virtues of justice, temperance, prudence and fortitude, and the “theological” virtues of faith, hope and love.

The positio was then submitted to a committee of nine theologians, who concluded by voting that Matteo Ricci had lived a Christian life to a heroic degree. Father Ricci’s cause was next examined by the cardinals and bishops who are members of the dicastery. After their vote in favor of the cause, the pope authorized the dicastery to draft a decree declaring Father Ricci “Venerable.”

In order for the pope to declare him blessed (the next step on the path to sainthood), the postulator of the cause will need to provide evidence of a miracle through the intercession of Matteo Ricci; by Vatican convention, a second miracle will be needed for him to be declared a saint.