Catholics: Your diocesan newspaper is worth saving. 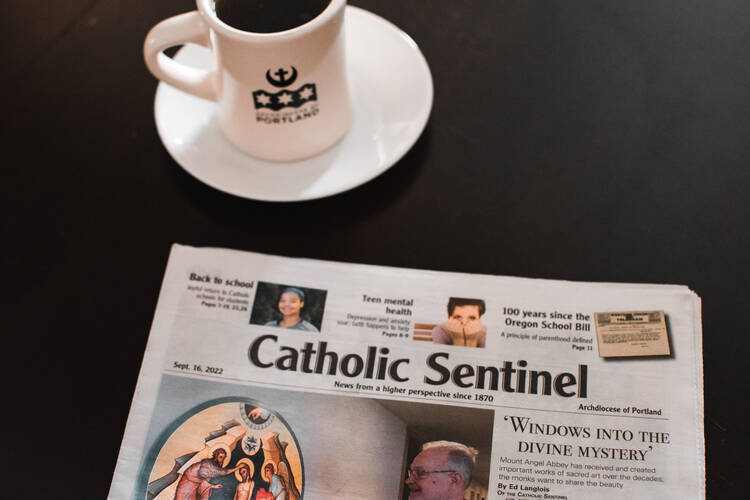 A recent copy of the Catholic Sentinel, published by the Archdiocese of Portland, Ore. (Courtesy of Elisha Valladares-Cormier)

After more than 150 years, the Catholic Sentinel, the official newspaper of the Archdiocese of Portland, Ore., has put ink to paper for the final time. The archdiocese and Oregon Catholic Press, which published the paper, announced that the Sentinel and its Spanish-language counterpart, El Centinela, would be shut down on Oct. 1 in order “to focus more on evangelization and outreach and less on classic journalism.”

The Sentinel is not the only diocesan newspaper to announce its closure this year—Catholic New York published its final issue on Nov. 17—and it seems likely that many other diocesan print publications will eventually meet the same fate.

The archdiocese and Oregon Catholic Press announced that the Sentinel and its Spanish-language counterpart, El Centinela, would be shut down on Oct. 1.

To me, the Sentinel’s demise is a blow similar to losing a family member. I first read the newspaper in 2014, when my family moved to Oregon during my junior year of high school. I already knew I wanted to be a journalist, but I was still attached to my pipe dream of becoming a New York Yankees beat reporter. The only diocesan newspapers I had read to that point were effectively bulletin boards for diocesan events with a handful of Catholic News Service stories sprinkled in.

The Sentinel was different. The first issues I read had stories about real issues facing Catholics in western Oregon: a couple who abstained from sex for 19 months after becoming Catholic in order to pursue annulments for their previous marriages; efforts to pass a bill allowing undocumented immigrants—a growing contingent of the church in Oregon and elsewhere—to drive legally and support their families; and a priest’s ministry to Portland’s hipster bar scene. (It is unclear how long the Oregon Catholic Press will keep the Sentinel archives online.)

These were stories I had never read anywhere else. A few months later, I wrote my first article for the Sentinel, a 400-word reflection on the compatibility of technology and faith. From there, my appreciation for the Sentinel and the mission of diocesan newspapers only grew. In college, I wrote my senior thesis on diocesan news publications because I wanted to dive into the “why” of their existence.

There was a certain nobility to the Sentinel, and as I learned more about diocesan newspapers around the country, I realized it was something intrinsic to the profession of Catholic journalism.

The early Catholic newspapers—there were 17 Catholic publications in the United States by 1849, and some 325 of them six decades later—had three primary roles: to catechize Catholics, to inform people of what the church was doing, and especially to evangelize to Catholics and non-Catholics alike. Many were founded with the expressed intention of combating the anti-Catholic bigotry and misinformation that was rampant throughout the 19th and into the 20th century. As the Sentinel’s founder, Henry Herman, wrote in its first editorial, the paper was intended to be exactly what it sounded like: “a sentinel or defender of our faith from outside and inside disturbances, and to our brethren, a medium for the interchange of ideas, having in view mutual improvement and benefit.”

Many Catholic newspapers were founded with the expressed intention of combating the anti-Catholic bigotry and misinformation that was rampant throughout the 19th and into the 20th century.

To the very end, that is exactly the product the Sentinel gave its readers: catechizing, informing and evangelizing. Its final issue could have been exclusively filled with sentimental goodbyes and letters to the editor, but it featured the same kind of content that had been its hallmark for decades, including stories about affordable housing being developed in Portland by Catholic Charities and the growing intensity of pro-life vigils after the Dobbs decision.

The Sentinel was consistently ranked at the top of its class in recent years, winning awards and setting a standard for the 130 or so diocesan newspapers and magazines now in print. If it can be shut down, so can any diocesan newspaper or magazine.Many bishops and diocesan decision-makers are becoming increasingly convinced that print is not worth the physical or financial investment, but there are statistics to the contrary. In 2017, a study by the magazine Content Evangelist estimated that diocesan print publications had a combined circulation of 6.4 million, or 24 percent of all Catholic households in the United States. The same study estimated that only 4 percent of Catholics followed a Facebook account from a diocese and 2 percent followed a diocesan Twitter account—shares that may have increased over the past five years but are unlikely to have reached the impact of print publications.

In 2017, a study by the magazine Content Evangelist estimated that diocesan print publications had a combined circulation of 6.4 million, or 24 percent of all Catholic households in the United States.

As America’s J.D. Long-García wrote in 2020, when he was president of the Catholic Media Association, “We cannot throw away print. Choosing to produce only a digital product is choosing economics over evangelization.… The Catholic Church in the United States and throughout the world has a story to tell. And it is a story that is worth telling in print.”

The demise of the Sentinel and every diocesan newspaper that follows it is a devastating loss. Without them, who will tell the story of the local church? With the closure of sister papers such as El Centinela, how will original Spanish-language content be produced at the local level to serve the growing Latino Catholic population in the United States?

The Sentinel came into my life at a critical time. I knew I wanted to be a journalist but didn’t have the first clue of what that would look like or how I would get there. But when Ed Langlois, a member of the Sentinel’s staff since 1993 and its managing editor since 2016, invited me to join his youth writers corps, I knew I had found my occupational vocation.

Writing for the Sentinel throughout high school and college allowed me to observe excellent Catholic journalism in action. Ed has been an incredible mentor to me, demonstrating the compassionate soul required for someone in this line of work—or ministry, as he would say.

But the impact of its work goes far beyond me. The Sentinel has catechized, informed and evangelized generations of Oregonians for more than 150 years. It has told countless stories of Catholics at their highest and their lowest. No matter what new communication efforts are made by dioceses, the impact and reach of these stories cannot be replicated in a digital product.

The worst story is the untold story. Catholics everywhere deserve and need their stories told by their local church, because they inspire their local church. With more diocesan newspapers likely to fall the way of the Sentinel in the future, we must not underestimate the true cost of their absence. Their demise will undoubtedly weaken the church's ability to catechize, inform and evangelize. 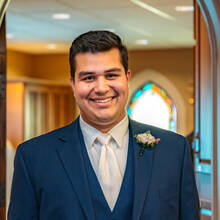 Elisha Valladares-Cormier writes from Sandusky, Ohio. He currently serves as associate editor of Columbia, the monthly magazine of the Knights of Columbus.