Podcast: The way Catholics calculate the date of Easter could be changing 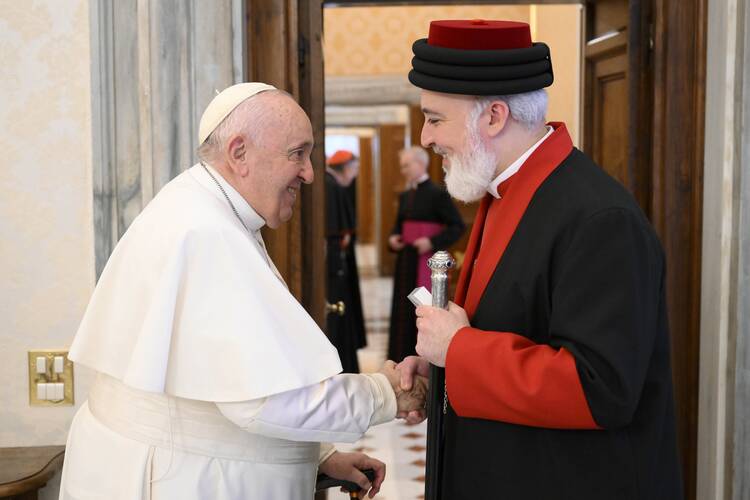 Pope Francis shakes hands with Catholicos Awa III, patriarch of the Assyrian Church of the East, at the end of a meeting Nov. 19, 2022, in the library of the Apostolic Palace at the Vatican. (CNS photo/Vatican Media)

For Thanksgiving week, “Inside the Vatican” is bringing you a brief update on a few of the top Vatican stories from the last week.

Up first, the way Catholics calculate when to celebrate Easter could be changing.

This past Saturday, Nov. 19, Pope Francis met with Mar Awa III, Catholicos-Patriarch of the Assyrian Church of the East, which is an Eastern Christian church based in Iraq. In the meeting, the pope took the opportunity to express his support for the idea that Eastern and Western churches should celebrate Easter on the same date—usually they’re about a week apart, with the Eastern Palm Sunday falling on the Western Easter.

Echoing Vatican II, Pope Francis said that he is willing to accept any proposal for a common date of Easter provided that the other churches that are not in communion with Rome agree.

Next, Pope Francis assigned a lay man and father of two as secretary of the Vatican’s Dicastery for Laity, Family and Life last week. Gleison De Paula Souza is the first layperson to serve as second-in-command in this dicastery; three of the four top positions in that office are now held by lay people.

Finally, on Nov. 22, Pope Francis overhauled the leadership of Caritas Internationalis, which is the church’s charity arm; it includes 162 charitable groups including Catholic Charities USA and Catholic Relief Services. The pope removed Caritas’ entire executive team after a review of the organization revealed management weaknesses that had damaged staff morale. Some current and former employees report bullying and favoritism within the organization’s Rome headquarters. A statement from the Vatican made clear that there was no financial mismanagement or sexual misconduct.