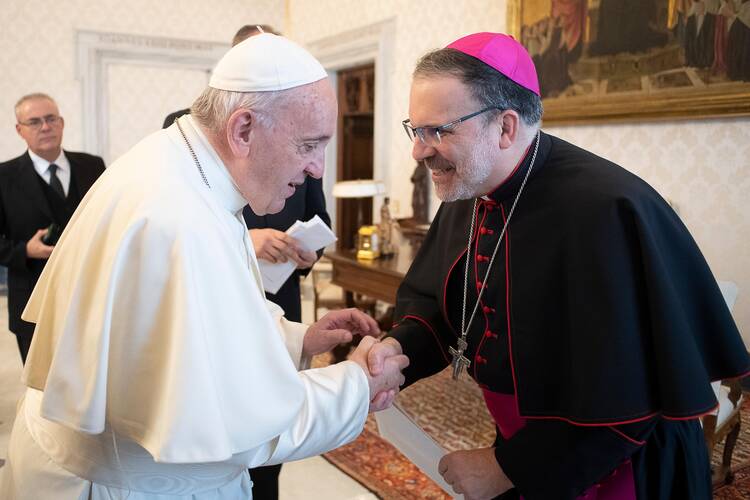 Pope Francis greets Bishop John E. Stowe of the Lexington, Ky., during a Dec. 3, 2019., meeting with U.S. bishops from Regions IV and V who were making their "ad limina" visits to the Vatican. (CNS photo/Vatican Media)

Just a few hours after its bishop-members voted down the candidacy of Cardinal Joseph Tobin of Newark for the number-three spot at the U.S. Conference of Catholic Bishops on Nov. 16, Bishop John Stowe, O.F.M. Conv. of Lexington, Ky., was smiling through evident frustration. In a few hours he would—again—implore his fellow bishops to consider a complete rewrite of its quadrennial Faithful Citizenship statement, with the aim of reflecting the ecological and economic issues prioritized over the last decade by Pope Francis.

That decision has been put off for years with compromises worked out over editorial tweaking or new introductions to the document, which was first composed in 2007. Bishop Stowe seemed resigned to a similar outcome in 2022, two years before an important presidential election campaign.

Bishop Stowe: “I hope Archbishop Broglio can bring us together a little bit better than we have been, but i’d also like to see Francis’ agenda much higher on the bishops’ priorities.”

Conference members indeed voted that afternoon to delay an overhaul of Faithful Citizenship—this time until after the 2024 election, indicating that an entirely new document on how U.S. Catholics should think about voting will not be completed and distributed until the 2028 election.

America spoke to Bishop Stowe about his impressions of the fall general assembly and the state of the U.S.C.C.B.

The interview has been edited for clarity and length.

What do you think the election of Archbishop Timothy Broglio says about the direction the conference is going to take over the next three years?

I think it says we’re definitely not going to be going in the direction of Pope Francis any more than we have, and that’s unfortunate. I hope Archbishop Broglio can bring us together a little bit better than we have been, but I’d also like to see Francis’ agenda much higher on the bishops’ priorities.

Just after his election, Archbishop Broglio expressed a willingness to meet with President Joseph Biden, only the second Catholic to serve in the highest political office in the land. Do you think the U.S.C.C.B. can find common ground to work with Mr. Biden and Democrats in Congress despite differences over abortion?

“The conference itself is not following the agenda of Pope Francis. We still don’t have ‘Laudato Si’’ or anything on the environment in our priorities.”

We used to think we could work with Democrats on immigration; now I’m not sure because Democrats haven’t had much success in that regard. We believed that Deferred Action for Childhood Arrivals at least could be approved. And Democrats can blame Republican obstructionism for that, but they also don’t seem to have the appetite for fighting it anymore.

[Archbishop Coakley of Oklahoma City: A culture of life means an end to the death penalty]

But immigration is one area we could work together on, and another area of potential common ground is labor issues, if we look at what our Catholic Church teaches. But we have to clean up our own house in terms of labor issues, too.

Outside the conference, critics compare “Francis bishops” with other members who are perhaps more willing to engage in America’s culture wars. Does it make sense to talk about the conference members in that way?

I’m not sure that when it comes to individuals that the labeling is helpful, but you can say that the conference itself is not following the agenda of Pope Francis. We still don’t have ‘Laudato Si’’ or anything on the environment in our priorities. There’s been no talk of ‘Fratelli Tutti.’ Today, we’re going to talk about ‘Faithful Citizenship’ and reissuing an old document that has no mention of ‘Fratelli Tutti.’”

Why can’t the bishops who support the pope’s agenda on care of creation and economic justice, 10 years into his papacy, get more of it to be seriously addressed by the conference?

There must not be a will and that’s what’s taking so long. We heard the papal nuncio Archbishop Christophe Pierre in his address to the bishops offer Pope Francis’ greatest hits, but you don’t find much correspondence of those themes with the U.S.C.C.B agenda.

It did seem that the nuncio once again was gently reminding the conference what the pope expects from them. I think he did it last year as well.

He does it every time and then they just go in a different direction.

In the not-too-distant past, a more engaged U.S.C.C.B. seemed to be a mover in Washington, able to get into the rooms where decisions were made and U.S. social policy was discussed. Do you think that’s this conference now?

[Archbishop Broglio, questioned on abuse, homosexuality and whether he’s a ‘Pope Francis’ bishop in first press conference as U.S.C.C.B. head]

“I think the conference is becoming more and more irrelevant to average Catholics.”

And is that where a lot of the energy of the so-called Francis bishops has gone?

It’s what works for me.

Do you think that the Catholic public is exhausted by the confrontational approach that some bishops seem willing to continue?

I think the conference is becoming more and more irrelevant to average Catholics.

How do we change that?

You know, that’s a good hope to pin on the synod—if we take synodality seriously, if we really listen to what people are saying, if we let that form the priorities going forward. And for those who are concerned that the synod is raising issues that go beyond the tradition of the teaching of the church, well, then that gives us an opportunity to teach.

But are we listening to the concerns? And are we trying to meet them?

It doesn’t seem like there was a great deal of enthusiasm for the synodal process among a lot of the conference members.

No, all the attention goes to the National Eucharistic Revival.

If bishops want the Eucharistic Revival to succeed, would it help reconnecting with public policy issues that also energize Catholics?

We are trying to connect it to mission. Even Pope Benedict and John Paul II, when they talked about the Eucharist, it was also about feeding the hungry and becoming bread for others.

Despite your frustration with the conference, you seem to keep a somewhat light-hearted attitude about it all. How do you find optimism for going forward?

My optimism is with the people of God and my optimism is in the pastoral life of the church. I just wish the bishops as a body would think about whether they’re having an impact, how relevant they are or aren’t, and how all this talk about evangelization has got to come forth in some attitudes and words and actions.