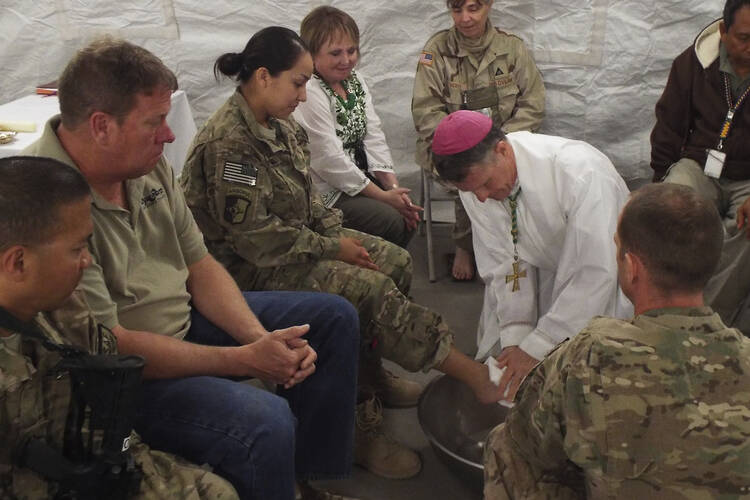 Archbishop Timothy P. Broglio of the U.S. Archdiocese for the Military Services was elected on Nov. 15 to a three-year term as president of the U.S. Conference of Catholic Bishops during the bishops’ fall general assembly in Baltimore.

The native of suburban Cleveland was chosen from a slate of 10 nominees, winning with 138 votes.

In subsequent voting, Archbishop William E. Lori of Baltimore was elected to serve a three-year term as conference vice president. He was elected on the third ballot by 143-96 in a runoff with Bishop Kevin C. Rhoades of Fort Wayne-South Bend, Indiana.

The two top officers begin their terms at the conclusion of the fall assembly on Nov. 17.

Archbishop Timothy P. Broglio of the U.S. Archdiocese for the Military Services was elected Nov. 15 to a three-year term as president of the U.S.C.C.B. during the bishops’ fall general assembly in Baltimore.

Archbishop Broglio, 70, worked in the Vatican diplomatic corps before being named the head of the military archdiocese in 2007. He has served as conference secretary for the past three years.

He was ordained a priest in the Diocese of Cleveland in 1977. In the Vatican diplomatic corps, he served as secretary in the apostolic nunciature in Ivory Coast and later in Paraguay. From 1990 to 2001 he was chief of cabinet to Cardinal Angelo Sodano, Vatican secretary of state under St. John Paul II and desk officer for Central America.

Archbishop Lori was appointed the 16th archbishop of Baltimore by Pope Benedict XVI in 2012. He is the former chairman of the U.S.C.C.B.’s Committee on Doctrine and its Ad Hoc Committee for Religious Liberty. He began a three-year term as the bishops’ pro-life chairman at the end of the USCCB’s 2021 fall assembly.

In a keynote address opening the annual meeting, the apostolic nuncio to the United States Archbishop Christophe Pierre challenged U.S. bishops to embrace the lessons emerging from the synodal process, to allow the U.S. church to become a listening church, one in dialogue with culture, asking: “Where are we and more importantly where are we going?”

Archbishop Broglio, 70, worked in the Vatican diplomatic corps before being named the head of the military archdiocese in 2007.

Archbishop Pierre told the bishops assembled for their annual meeting in Baltimore on Nov. 15 that the words and example of Pope Francis, approaching the 10th anniversary of his papacy, could help guide them in answering those questions, reminding them of the pope’s admonition that a church that “does not go out of herself” risks becoming inward, self-referential, risks “becoming sick.”

Archbishop Pierre said, “The Holy Father challenges us not only to accompany others in their spiritual journey but in their human journey…aware of the brokenness of life.”

The church, he said, must be more deeply committed to its mission in the world than to old structures that may come to hinder it. The church exists to evangelize, he said, “to go forth” and break out of its comfort zones, reach out to “the abandoned and forgotten” and express its tenderness to them.

“Does the church in the United States understand herself in this way?” he asked. “Do we go forth and take the initiative…do we accompany others showing patience? Do our churches demonstrate the joy of a eucharistic community?”

Archbishop Pierre said, “The Holy Father challenges us not only to accompany others in their spiritual journey but in their human journey…aware of the brokenness of life.”

The U.S. church, he said, is “beginning to think and lead in a synodal way, learning how to listen” and learning patience with dialogue—a lesson for the broader society. “Much of the division in this country—in families and communities and even in the church,” he said, “comes from the fact that we have forgotten how to be with one another and to speak with one another.”

In his last address as president of the U.S. Conference of Catholc Bishops, Archbishop Jose Gomez seemed to find answers for some of the papal nuncio’s questions. Touched by the conversations with parents and young people across the country he has had over the last three years, Catholics “trying to make Jesus part of their lives…gives me hope for the future.”

“It’s not inevitable that our country will fall into secularism,” he said.

The noisy fractiousness of our current time has been experienced before, he said, noting that his personal hero Dorothy Day, writing in the 1940s, worried over how the print and radio media of her era seemed to be conspiring then to overcome faith and holiness.

“Long before Big Tech and the internet,” he said, “The challenges we face today are nothing new.”

He added, “What the soul is to the body, the church is to the world.”

In his address, Archbishop Pierre agreed that the responsibility to evangelize was shared by all the people of God.

The church in the United States has been “prophetic in its openness to those suffering to those suffering a human catastrophe at the border” and in defense of the unborn and now in “Post-Dobbs” in walking with women in need, Archbishop Pierre said, referring to the U.S. church’s expanding efforts to support women facing unplanned pregnancies.

“The church in the United States can be a protagonist in building civilization,” Archbishop Pierre said, “builders of communion and stewards of life and creation.” The U.S. church, he said, “can offer the people of God an integral vision of man and his place in the world.”