America magazine’s own stained glass: The rich history of the LaFarge Windows 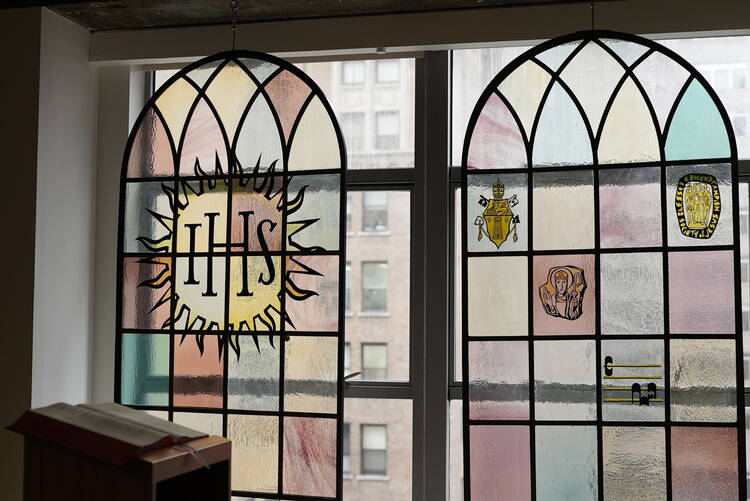 The LaFarge Windows in the chapel of America Media's headquarters. (Kevin Jackson/America Media)

It is not often that you find stained glass on the 11th floor of a mid-century skyscraper in Midtown Manhattan.

The “LaFarge Windows,” housed in the offices of America Media, have little to do with the noted 19th-century artisan John LaFarge, but rather serve as a monument to the extraordinary life of his son, John LaFarge, S.J. A champion of civil rights, proponent of international peace, brilliant critic of the arts, a Harvard dandy turned Jesuit country priest turned editor, LaFarge junior spent 37 years on the staff of America—serving as the fifth editor in chief from 1944 to 1948.

When Father LaFarge died in 1963, the editor in chief at the time, Thurston N. Davis, S.J., commissioned the Rambusch Company to create these windows as a tribute to the late Jesuit. (It should be noted that Father LaFarge was chaplain to the St. Ansgar’s League, established by the Rambusches to support the Catholic Church in Scandinavia). The windows were installed in America House at 106 West 56th Street in 1964.

Stained glass tells a story—in both its creation and the narrative it sets out to tell.

When America sold its longtime headquarters on 56th Street in 2017, the Rambusch company came once more—America does not leave an editor behind. Viggo Rambusch, who had created the windows in 1964, returned with his sons to remove, restore and reinstall the windows in America’s new headquarters at 1212 Avenue of the Americas. For the first time in their long history, the south-facing windows dedicated to Father LaFarge glitzed and gleamed as the sunlight passed through them—a privilege denied by the back alleys they faced at 56th Street.

The windows themselves draw on older techniques, in which each pane is individually crafted to have a watery effect. And the medallions throughout the windows tell the story of John LaFarge: a sunburst for the Society of Jesus; St. Ansgar for his personal relationship to the church in Scandinavia; the coats of arms of Harvard and the University of Innsbruck, both instrumental in Father LaFarge’s education; the coat of arms of the State of Maryland, where Father LaFarge spent years ministering to poor Black communities; symbols from the international peace and ecumenical movements; homages to Father LaFarge’s robust literary output; and the coat of arms of John XXIII, the last pope Father LaFarge served. (The damaged original of the coat of arms was replaced; the author has it in his study—a treasured gift from the Rambusches.)

When the windows were being moved and reinstalled, Matt Malone, S.J., America’s 14th editor in chief, made a request to add two new medallions. The first was of the Lincoln Memorial, with the words “I have a dream.” Not only was Father LaFarge a proponent of civil rights, but the March on Washington was the subject of his last “in the field” report for America before his death. The second addition depicts Father LaFarge’s tombstone—including the inscription taken verbatim from its site in Hyde Park, N.Y.

Stained glass tells a story—in both its creation and the narrative it sets out to tell. The LaFarge Windows are a unique narrative housed in the new headquarters of this review.